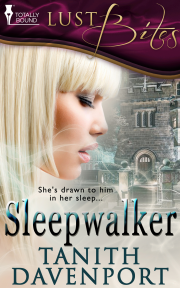 She's drawn to him in her sleep…

Tally Haslam has too much to deal with. A herbalist and aromatherapist, her latest creation - an aphrodisiac potion - remains in unsaleable condition as she has nobody to test it with. And, much to her annoyance, she sleepwalks.

Hoping to get away from it all for a weekend, Tally travels to nearby Madigan Hall for their yearly Paranormal Evening—but on the first night she wakes up outside the bedroom of another guest: Kyle Hunter, who has chosen to pleasure himself with the door open. Tally escapes without being seen, but is unable to get Kyle out of her head—especially when she finds herself at the same table at him the following evening.

However, Tally's world is turned upside down when, at the paranormal dinner, she encounters the ghost of the Blue Lady, who seems determined not to leave her alone—and shows a disturbing penchant, when Tally sleepwalks again, for leading her astray…

As soon as she opened her eyes, she knew it had happened again.

The hallway was dark, the only light source a moonbeam that fell through a nearby window. She felt carpet beneath her bare feet, her silk nightgown brushing against her ankles. The air was still, cool and silent. The building was asleep.

Damn it. She knew this had been a bad idea.

A soft sound behind her made her spin round, her dark hair slapping against her shoulders. A crack of light glowed at the end of the corridor—a door had fallen ajar. She could hear something from within, quiet noises that sparked a memory at the back of her mind.

Tally turned on the spot and looked around her. The place was familiar and she bit her lip in frustration. Her room was near here, but there was no avoiding it—she would have to pass the open door.

A metal object knocked against her ankle as she moved and relief flooded through her. At least she still had her room key. As quietly as possible she made her way down the corridor, pressing close to the opposite wall as the open door drew nearer.

What is that noise? Is that…?

The urge to glance through the doorway was irresistible as she passed. A figure was visible, and she paused—

The first thing she saw on the bed was a pair of feet, splayed to reveal tanned legs leading up to a muscular, naked male body. Dark hair spread on the pillow and lower where it drew a happy trail from a defined chest down, down, down to the hollow of his groin, from which rose a solid erection wrapped in one firm hand. His face was barely visible, but what she could see was twisted in a rictus of pleasure as he slid his hand up and down, up and down, up and—

Tally knew she should go, but her body remained inextricably pressed against the wall, her gaze fixed on the vision in front of her. She tightened her fingers in the folds of her nightgown, breathless, conscious of the heat growing in her gut and the wetness slowly building in her centre.

Sleepwalker is a great short paranormal erotica story. From the first page, it draws the reader in. It starts off with Tally happening upon an open hotel room. She hears noises coming from the room...

Reviewed by Erotica For All

This was a really fun story, with Tanith’s usual great writing style and hot sex. The storyline was intriguing, particularly as different threads got woven in.

Share what you thought about Sleepwalker and earn reward points.