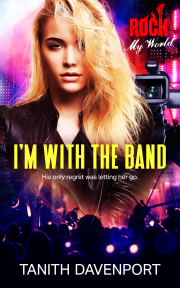 I'm With the Band

Book 3 in the Rock My World series

His only regret was letting her go.

When filmmaker Tawny Michaels is asked to make a documentary about recently re-formed band Greycomet, she already knows who she’ll have to face—her ex-boyfriend, Marsh Kilmer, lead singer of the band. In the ten years they’ve been apart Tawny has been happy with nothing but flings, choosing to avoid relationships, but Marsh’s only regret is losing her—and he’s determined to win her back, no matter what.

Knowing the production company is in the financial hole and finding herself still attracted to Marsh, Tawny decides to go along for the ride, but their passionate reunion hits trouble when the documentary attracts a stalker who has been relentlessly chasing the band. Tawny finds herself hiding out with Marsh, fighting to keep her business afloat while keeping herself safe—but soon realises her safety is the last thing on her mind. Can she forgive Marsh the past and trust him with her heart?

Reader advisory: This book contains scenes of stalking. There are mentions of injury and violence, drug use and drug overdose.

The lake stretched out in front of her, glistening with sunlight. It was early morning, the sun had barely risen, and Tawny Michaels was standing on the bank, clipboard in hand, checking her filming schedule.

Behind her she could hear the interviewer, Lola, giving orders to Tawny’s assistant Becca. Tawny glanced over her shoulder at her, catching her eye. She would be needing a coffee before all this started.

Becca approached, her tablet in hand.

“Am I getting your usual?”

“Please. Get Dani’s usual too. She’ll be here in a minute.”

“Will do.” Becky rolled her eyes and leant in a little closer. “The coffee shop is going to love me. Lola’s order is more complicated than yours and Dani’s combined.”

“They’ll survive. Leave me to deal with Lola.”

Becca smiled and disappeared. Tawny moved to where Lola was standing, now texting on her phone.

“Are we doing this inside his house, or out on the deck?”

Tawny cast a glance around, visualising how the light would look.

“I think we can film it out on the deck. There should be decent sunlight by the time Marsh gets here.”

Lola made a scoffing sound at her use of his name. “I’m assuming you’ll be involving yourself in the interview too. What with your—?”

“Nope. I’m staying behind the camera.”

Tawny threw Lola a look, causing Lola to abruptly close her mouth and return to her texting. Good. Lola could mind her own business.

Because while she knew damn well that everyone in the film crew knew all about her past with Marsh Kilmer, she was damned if it was going to be dredged up and dissected by all and sundry.

She had known for a month that this was going to happen, since their production manager Lars had called her into a meeting.

“We’ve been booked to make a documentary,” Lars had told her, leaning back to rest his hands behind his head as he put his feet on the table. “About Marsh Kilmer. Have you heard of him?”

Tawny felt she had done a remarkable job of keeping a straight face.

“I’ve already dispatched the research team,” Lars had continued casually as Tawny held herself very still, a cold grip around her stomach. “We’ve got a lot of ground to cover. He’s had quite the career and quite the past, I gather.”

If the research team were already on the case, Tawny had known that it would all come out sooner or later. There was no point playing dumb. But she would leave it as long as possible before she had to discuss it.

She had an image to protect.

She knew to Lars she was just Tawny, just a filmmaker. That was how she liked to keep it among the team. They didn’t need to know what she might have been in the past. Not that there was any shame in it—she was proud of it. But still, it was nobody’s business but her own.

Dani Breslin, her main camerawoman, had come round to her house later that afternoon to discuss the film over a glass or two of pinot grigio.

As they sat opposite each other at the table, Tawny had known they looked like twins who were doing their utmost to look different. Her with her long, honey-blonde hair, her catlike green eyes, the short leather jacket and matching pants she wore to accentuate her long legs contrasted with Dani’s short, blonde hair and the hoodies and jeans that concealed her hourglass figure. Many people had mistaken them for sisters, ridiculous as it felt.

“Have you spoken to Marsh about this?” Dani had asked, her wine glass at a dangerous angle in her hand.

“I haven’t spoken to him in years. Not since we broke up.”

“Mmm.” Dani had tilted her head thoughtfully. “I guess it’s going to be a bit awkward then. Is there bad blood between you two?”

Tawny had pondered for a moment, then had shaken her head.

“Not that I’m aware of. It was all very civil. We just—you know—didn’t pan out. Nothing exciting in that really.”

“Fair enough.” Dani had taken a sip of wine. “I suppose it happened in the early days of the rock band. You wouldn’t have seen much of him what with all the touring, right? And then all the groupies. It can’t have been easy.”

Looking back on it now, Tawny wondered why she had let Dani speculate instead of simply telling her the truth. It was all going to come out during filming anyway.

But she hadn’t lied. There was no bad blood between them as far as she was concerned and, despite what she had let Dani think, there had been no groupies. Not while they had been together, anyway.

But the truth of their relationship was something she planned to keep to herself.. However long she could do that for, anyway.

Because it was the first day of filming, and Marsh was due on set any moment for his first interview.

And she had known Lola long enough to know nothing would get past her.

Share what you thought about I'm With the Band and earn reward points.

Other books in the Rock My World seriesView Series Page

Buy Now: £1.99
The Start of Something
Tanith Davenport