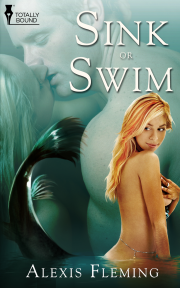 Do mermaids have orgasms? Who knows, but she'd better find out quick before she exchanges her girly bits for fishy slits.

A mermaid who can't swim? What could be worse? When Samie McIntyre finds out she's about to turn into a mermaid, a legacy of her selkie father and mermaid mother, she realises she has one major problem. Well, er, maybe two… First, she can't swim. And second, she has aqua-phobia. What good is a mermaid who's afraid of the water? As far as she can see, there's only one thing to do. Talk the sexy Jonah Billings into teaching her to swim.

And if she can convince him to indulge in a bit of horizontal wrestling before she becomes a pickled sardine, so much the better.

Jonah’s thought processes shut down, the words drying up as he stared at the apparition in front of him. Eyes blinking furiously, he stumbled backwards and bumped into the door behind him, smacking his head on the timber surface. His feet went out from under him and he ended up on his ass on the tiled floor.

His eyes snapped open and he focused on her, trying to ease the constriction in his jeans. She’d draped her arms over the edge of the bathtub and rested her chin on her hands. At least now he wasn’t distracted by the sight of her slender body covered in nothing but an itty-bitty piece of butt floss and a gold chain about her waist.

Yeah, right! He had a photographic memory and it had already processed the image of Samie dressed in a black thong and floundering about in a tub of water. And talking of water...

“Turn the flippin’ tap off, woman. You’re drowning my apartment below.”

“Oh crap, I’m so sorry.” She unlinked her arms and started to rise up in the bathtub.

Jesus, he was acting like a raw teenager, freaking out at his first glimpse of a naked woman. He was a grown man for crying out loud, with his fair share of affairs behind him. The sight of a nearly naked Samie shouldn’t have thrown him into this type of tailspin. It wasn’t like he wasn’t used to seeing her running around in the briefest of swimwear.

He tried to scramble to his feet, but he couldn’t get any purchase on the wet tiles. By the time he managed to get to his knees, his jeans were soaked through to his shorts, the fabric moulding the biggest boner he’d had in a long time.

Water filled the bathtub to the brim, flowing over the top and covering the floor. Samie’s floundering around sloshed even more over the edge. On hands and knees, Jonah crawled to the tub and turned off the tap. Grabbing the towels hanging on the rail beside him, he tossed them onto the floor to sop up some of the moisture. Then he turned his attention to Samie.

Oh-ohhh, wrong move. Jonah groaned. Wedged up against the side of the bathtub, and with Samie kneeling on the porcelain surface, his eyes were level with a gorgeous set of boobs. For such a slim girl—woman!—she sure had big breasts. Rosy nipples, large areoles, deeply tanned...except for a perfect white triangle where her swimsuit normally covered.

He had a sudden hankering to lean across and take one of those pert nipples into his mouth, see how much of the darker surrounding area he could cover at the same time.

Sudden? Like hell. This was something he’d fantasized about for the last eight months, ever since he’d moved into the block of apartments owned by Samie’s mum, and now her. Problem was, she’d never handed out the right signals to make him assume she might be interested in something more than landlady/tenant. And she isn’t now, you randy fool, so get with the game.

Oh, she was friendly enough, but he wanted more than friendly. If anything, she treated him like a big brother. Shit, he didn’t want to be anyone’s big brother and certainly not Samie’s. If the state of his cock right now was any indication, he’d never be able to think of her as a sibling.

“What the heck do you think you’re doing?” he snapped in an effort to keep his mind off her body. “You trying to drown me? If you want to get rid of me, just say so and I’ll vacate. And take those stupid goggles off. It’s like talking to a goldfish with bug eyes.”

She whipped her hand up and tried to snatch the swim goggles off her head, grimacing when the strap snagged in her hair. “Damn, I’m caught. Give me a hand here, will you?”

He didn’t want to do it, but he had no valid reason for refusing. Didn’t she realise that would put him within mouth...er, hand distance of her naked boobs?

With a tortured sigh, he shuffled closer and reached for the tangled goggles. As he sifted his hand through her lush red-gold waves, she rested her head against his chest. Heat hit him, forking through his body and lodging in the already hard appendage pushing at the front of his jeans. Hell, much more and he’d explode...or bust the zip of his pants at the very least.

After a few clumsy tugs and a lot of under-the-breath swearing, he managed to get the goggles free and dropped them into the water. Dividing her hair into two bunches, he dragged it forward over her shoulders. Her hair was so long it covered her breasts totally. He was finally able to breathe without struggling for oxygen.

Alexis Fleming is one of those strange people who live inside their mind. No, she doesn't hear little voices… Well, she does, just not the type you're thinking of.

Alexis' world is peopled with interesting characters and exciting possibilities that come to life in each and every book she writes. Her first love has always been romance, whether on this world or the next. Hot, sizzling relationships with a dash of comedy and a few trials and tribulations thrown in to test her characters.

When she's not tied to her computer creating sizzling stories to tempt her readers, she helps run a busy motel set on the edge of a National Marine Park in Australia. What better place to get inspiration for the tales she turns out? A glorious sunset over the ocean, dolphins playing almost in her front yard, suntanned bodies lazing on the sand… How could she not get caught up in the eroticism of that?

Sink or Swim is a fantastic story that you definitely don't want to miss. Alexis Fleming has such a smooth writing style that the dialogue just flows beautiful and doesn't miss a beat...

Hilarity and passion combine to make Sink or Swim a memorable story that is leaves you smiling.

Share what you thought about Sink or Swim and earn reward points.