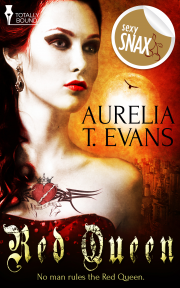 No man rules the Red Queen.

In her Court, a black market organization that specializes in magical artifacts and antiquities, Eden Farrow rules with an iron fist and a steel-boned red corset.

Some of her employees want her to transition into more traditional criminal commerce, but Eden—also known as the Red Queen for her ruthlessness and the Queen of Hearts for her uncanny ability to steal the hearts of men after one night in bed with her—refuses to budge. She prefers a cleaner, nobler kind of illegal activity.

She’s also a vampire with a taste for the gothic and theatrical, and she’s used to getting her way.

All that changes when another vampire and his werewolf companion invade her territory. She brings Antony and Luca in, preparing to torture them mercilessly before forcing them to submit to her bite.

Her lieutenants returned to their duties, some to the streets and some to the line of computers along the wall. At least half of the new world was cyber and the best criminals were hackers these days. Eden was nothing if not flexible in her efforts to keep her business not just alive but thriving.

Callum lingered behind as she settled herself at her desks in her section of the giant warehouse room. One of them was personal, the second professional, the third to display some of her wares and new acquisitions for potential buyers. Callum stood in front of the professional desk, a simple glass table with a few clear drawers, a leather blotter, and a slim, black desktop computer.

The man was troubled. And when one of her men was troubled, she listened, especially with someone like Callum. He was one of the few members of her organization who hadn’t been in her bed and one of her few lieutenants who knew she was a vampire.

A woman didn’t broadcast that information for all and sundry, because then turmoil in the ranks brought out the crosses and holy water. Those things didn’t do a damn thing to her, but they sure got annoying after the fiftieth holy water bath, which tended to ruin her leather. Stakes and sun—those were the real dangers, but only to those who knew best how to wield them. The city had a wealth of vampire hunters, though none yet keen enough to defeat her. She even had a few on her payroll after getting her teeth into them.

“I was approached by J and Santos again,” Callum said.

Eden closed her eyes and sighed. “They approach you because they know they can sell to you and not to me,” she said.

“Santos says that with our resources, we can easily pull in an additional seven million dollars a year.”

“By smuggling in their cocaine and their women,” Eden said. “And giving them the resources to cook their meth and manufacture their heroin.”

“I’m not saying we have to stop doing what we’re doing now,” Callum said, running his hand through his blond hair. He needed to get it cut. It made him look too young and innocent when Eden knew he was neither. “I’m saying we can make that much on top of what we’re already doing. It’s not like we don’t have the manpower.”

“It’s not about the money or the manpower,” Eden said. She drummed her dark red lacquered nails on the glass, each tap like the clicking of a death beetle.

Callum swallowed but stood his ground, the petulant line forming between his eyes. Eden had grown used to seeing it these last six months. J and Santos had been grooming him—and likely garnishing his palm for the honor.

Share what you thought about Red Queen and earn reward points.

This winter, I’m writing about vampires.

There’s no particular reason for this trend. I like vampires, sure. I have two novellas, one short story, and a serial to that effect. But quite unconnected to any planning on my part, I’ve found myself in the vampire section of all my series. Each series has horror and supernatural elements, but most extend well beyond the traditional.

It’s sheer coincidence, maybe serendipity, and one I’m enjoying at the moment.

Three of my favorite desserts?

That's a hard one — I have such a sweet tooth, and since I'm far more motivated to bake than cook, I have a whole handful of desserts I enjoy, and an even bigger handful of ones I want to try in the future.