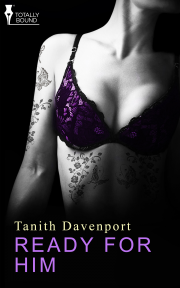 In the bar at the Bellagio in Las Vegas, Jade Bleecker celebrates with her three best friends, all of whom are there to get married. Jade is their bridesmaid, and beginning to believe that three times a bridesmaid really does mean never a bride. Tattooed, pierced and a martial artist, Jade is used to inspiring fear rather than desire in men, and even if she did find one who could handle her—well, no man is worth trusting with her body.

Looking at each of her friends in turn, Jade Bleecker raised her glass of champagne and smiled. "A toast, everyone. Piper, you first."

Piper tucked her brown hair behind her ear and thought for a moment. "To marriage."

Beside her, Shaundra giggled. "Oh God, I can’t think of one. You guys go ahead of me, I’ll get one in a minute."

"To Vegas, baby," Leonie announced, pressing a red-lipped kiss to her glass before raising it, capping the gesture with an exaggerated wink.

"To us," Jade added, lifting her glass higher with mock solemnity.

Their glasses clinked together and all four let out a cheer.

Ten p.m., and the bar at the Bellagio was buzzing with life. Jade sat back in her chair and observed her friends as they drank, all three in their own way thrumming with excitement. All three ready to get married in four days’ time, with her as their joint maid of honour.

It had already been quite the upheaval. Jade had moved out of the New York apartment she had shared with Piper a month earlier. Joey had moved himself in immediately, ready for married life. Leonie would be uprooting herself completely to live in her fiancé Darren’s home state of Iowa. As for Shaundra, no one knew what she would end up doing. She and Andrew were already sharing a studio apartment, spending money on the funkiest fashions and eating beans on toast for dinner.

Jade took a mouthful of champagne and scanned the bar, careful not to let her eyes linger on anybody for too long. The slightest hint that she might be man-hunting and she’d never hear the end of it.

"See anyone you like?" Piper murmured in her ear.

"Nope," Jade murmured back, restraining an eye roll. "These aren’t my kind of men, you know?"

Well, maybe. Maybe opposites did attract. But Jade knew her appearance set a lot of these men—rich men, businessmen, professional gamblers—on edge. With a modern mohawk in black and green, her tattooed arms and her nose and brow piercings, she made most men quail at the sight. They looked at her as though she was going to either punch them or stab them.

Tanith Davenport creates a well-defined introduction to the lifestyle, while explaining away the bad connotations that come with the acronym. Jade is far more approachable and developed in this story...

Share what you thought about Ready for Him and earn reward points.