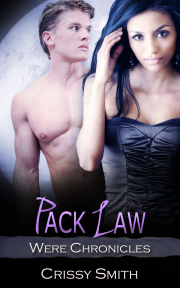 Book 15 in the Were Chronicles series

It’s the case that will change everything for shifters.

Mike Riley likes his small-town life and his job as an attorney in Clear Creek. When he’s asked by his Alpha to take on a case involving a shifter that has been fired for no reason other than for being who he is, Mike has no idea how big the case will become or how much it will affect every shifter around the world.

Shelby Holt is a reporter on the upswing of her career, and has secretly been sleeping with Mike for the last several months. As her feelings for the wolf shifter grow, she pushes them down, knowing he doesn’t fit in with the image she wants to show to the public.

She can no longer avoid him and her growing feelings, as the case Mike is working on collides with her career. When friends from the past join the wolf shifters in Clear Creek, Mike realizes how important the outcome of the trial truly is, and Shelby begins to crave the same fierce love she sees in their friends’ relationships.

Shelby Holt slammed her front door as hard as she could. The decorative windowpanes shook but she didn’t give a damn. With a scream, she launched her purse from the hall into the living room as she stomped farther into her home. A lamp crashed to the floor and she smiled. If she wanted to wreck her entire place, she would and no one could stop her.

“I hardly think throwing a temper tantrum is going to help anything.”

She whirled around, shocked at the audacity of the man who had followed her. Of course he wasn’t going to let their argument go. She should have paid attention as she’d driven home, and why hadn’t she locked the front door? Hands on hips, she glared at him. “I didn’t invite you in,” she snapped.

Mike Riley grinned—a wide grin with perfectly straight white teeth, which never failed to make her stomach flutter. Even as pissed off as she was at him, he still affected her. He stalked forward, and like prey caught by the big, bad wolf—because wasn’t that an accurate description?—she backed up slowly.

“Unlike vampires, I don’t have to be invited in but even if I did, you’ve done that plenty of times.”

Like she needed to be reminded! Shelby had no problem admitting her role in the disaster of their relationship, or whatever the hell was going on between them. Until now she’d enjoyed every minute of her time spent with Mike.

The only light came from the kitchen. She didn’t like coming home to a dark house, so every morning she left one room lit. In the dim glow, she could still see the scorching need in his gaze. Shit, just one look from him and she wanted to forget their fight and climb up his hard body. Mike was so damn solid and strong. At six foot one, with a body built from lots of hours at the gym—and his soft blond hair and bright blue eyes—he called to every part of her. But she wouldn’t give in so easily this time.

“Stop.” She pointed one perfectly manicured nail at him.

Mike raised an eyebrow then took another step.

Christ, he was right. As angry as she was, Shelby still wanted him. “You should have told me.” It was a weak argument but she wasn’t going down without a fight.

“That’s not our deal,” he reminded. “Your rules. We get together whenever one of us wants but we don’t share the details of our lives.”

Shelby knew the agreement and didn’t appreciate him throwing it back in her face. “Well, you still should have told me!” she yelled.

Mike strode closer while Shelby backed up until she had run out of space. She either had to stop or sit in the large overstuffed chair. Shelby stopped—there was no way that she’d drop low enough to have his cock anywhere near her mouth. Not yet anyway.

“I’m just obeying your rules,” Mike said. He reached out and placed his palms on the sides of her neck.

She repressed a shudder. The heat from his touch warmed Shelby from the outside in. It was always like this when Mike had his hands on her.

The main plot is interesting, and the romance is hot, sexy and fulfilling. I liked the outcome of both! The writing is smooth, and the pages almost turned themselves, as I couldn't leave the book until...

Share what you thought about Pack Law and earn reward points.