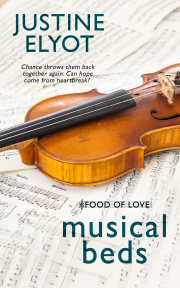 Book 2 in the Food of Love series

Can hope come from heartbreak? Music and passion rule the lives of Milan and Lydia, building bridges between them even when all seems lost.

After Lydia leaves a grieving Milan behind in Prague, their tempestuous relationship seems to be over. But chance throws them back together again when Milan is given the career opportunity of a lifetime.

Lydia is thrown off course by his self-destructive behaviour and, as much as she loves him, she can't be sure that she will ever be able to live with him. Then the issue is further confused by the arrival of a handsome and intriguing conductor from Germany…Meanwhile, Lydia's friend Vanessa is finding herself strongly drawn to her percussionist colleague—a man young enough to be her son.

Affairs of the heart run riot through the Westminster Symphony Orchestra. Will they ruin an important television broadcast, or will the musicians find love and peace at last?

Publisher's Note: This book has previously been released by Totally Bound Publishing. It has been revised and re-edited for re-release.

Whoever it was that said April was the cruellest month had it wrong, Lydia thought. It was May. Her slow amble through the park, on the way to her first rehearsal after a fortnight’s sick leave, found her ambushed at every turn by chirruping birds, falling petals, laughing children. All this unrestrained joy everywhere, all this rising sap—she should be taking part in it, with her lover. They should be promenading hand in hand along this lakeside, pointing at the swans, feeding the ducks, all between kisses.

But her lover was gone. And so was his other lover.

She had spent the two weeks following Evgeny’s funeral with her parents, suffocated in suburban semi-detachment, watching box sets of American dramas with glassy eyes and a tissue permanently in hand. She hadn’t played her violin once. She wasn’t sure she still could. Milan was in Prague, and there he would stay, and she would never see him again. She had to get used to it. She had to.

In the end, her parents had sent her back to London, fearful of her losing her place in the Westminster Symphony Orchestra if they let her spend too long sinking into their couch.

"I know you don’t feel ready, love," her father had said. "But you can’t give up your dream for this. It’s what you’ve always wanted. Don’t let it all go over some fella."

She knew he was right. But Milan was a lot more than ‘some fella’ and the dream seemed to have slipped away from her somehow, its melody mutated into a tuneless jangle.

Her journey took her past the park and the palace. She drifted, violin case in hand, on her way to the rehearsal hall, under a sun that seemed to be mocking her.

In the alleyway alongside the orchestra’s home, a young couple were kissing. She shoved past them. Her eyes filled with tears.

Her vision was still blurry when she reached the top of the steps and barged through the double doors into the lobby.

"Lydia!" A friendly voice, clucky and concerned, greeted her, and suddenly she was caught up in a tight embrace. Her nostrils filled with Armani Diamonds, and expensive fibres brushed her skin.

"Vanessa. Hello." The tears spilled out. She was unaccountably moved by her friend’s warm welcome. She’d had no idea what to expect on her first day back at work—she had feared whispering and averted eyes. This was a huge relief.

"Sweetie. Come and sit down." Vanessa hustled Lydia into the cloakroom and sat with her on the bench until her friend’s exhausted sobs died away. "I’m so glad to see you back. I was really worried you’d had a breakdown or something."

"But you have friends, and you have your music. They’ll see you through. I promise you."

"The music’s been awfully quiet lately."

"Then it’s time to get into the thick of it. Throw yourself into it. Talent like yours shouldn’t be wasted."

Lydia bestowed a watery smile on Vanessa. "I’m just a fiddle for hire," she said. "I’m not Paganini."

The thought hovered in the air between them. That’s more Milan’s style.

Vanessa dismissed it with a shudder.

"You’re wonderful and you should know it. Come on. Let’s forget the past. The future’s waiting for us."

In the rehearsal room, orchestral players milled about setting up music stands and tuning up instruments. There were no whispers or averted eyes, but plenty of genuine smiles and words of welcome. Lydia perceived an immediate difference in the atmosphere. Back before the disastrous central European tour, the orchestra had been a nervous beast—het up and highly strung. Now there was an air of playtime, a sense of freedom. Was it because Milan was gone? Was it really?

Her uneasiness wouldn’t quite fall away, despite the best efforts of her colleagues. Nobody mentioned Milan’s name, but there were a lot of sad and regretful allusions to Evgeny’s fate and polite enquiries about his funeral.

"There are a couple of new people I should introduce you to," said Vanessa, steering Lydia away from some cellists who were getting a little too emotional about the loss of their fellow player.

"That’s the new harpist, Sarah." She pointed out a polished blonde in a scarlet wrap dress, who looked over and smiled one of those professional smiles that don’t reach the eyes.

"Who’s the man on the timpani? What happened to Vernon?"

"He decided to retire early."

The timpanist was tall and rangy, with a mop of dark curls and a face made of shadows and angles. One second he looked like an endearingly gawky student, the next like a warrior poet. He was immediately intriguing.

Vanessa’s voice had gone all soft and fond. Lydia, forgetting her woes for a moment, widened her eyes, noting the twin spots of cherry red on her friend’s cheeks.

"Of course not. He’s young enough to be my son."

Share what you thought about Musical Beds and earn reward points.