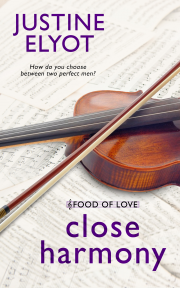 Book 3 in the Food of Love series

How do you choose between two perfect men? It's like choosing your favourite music—certain pieces suit certain moods. Which mood is Lydia feeling the most?

The autumn season of the Westminster Symphony Orchestra finds Lydia unable to choose between passionate Milan and dominant Karl-Heinz—so she decides to give them both a chance. She hops from one bed to the other, trying to weigh up her options. Milan has a hold on her heart, but has never been reliable. Karl-Heinz is a good man, but what is the secret behind his strange repression? Old rivalries and new jealousies are kindled while Lydia works hard at having the time of her sex life.

No trio has ever practised quite as hard as this…But there is trouble in paradise for Ben and Vanessa, too, as a face from Vanessa's past makes an unwelcome appearance and all seems impossible to resolve.

Amid turbulent emotions and orchestra rehearsals, the musicians work hard to negotiate a path to happiness. Will music prove to be the food of love, or a poison, infecting the future?

Publisher's Note: This book has previously been released by Totally Bound Publishing. It has been re-edited for re-release.

"I’m going to fall through the gap," said Ben.

"I’m sure the brochure said there was a double bed."

Vanessa squealed with laughter as her lover’s body forced the two jammed-together single beds apart and fell between them, with her on top.

"Shit!" she whispered, hearing him groan. "Are you okay? No bones broken?"

He lay motionless for a heart-stopping few seconds.

She knelt up and looked wildly around her, as if expecting to find emergency medical equipment instead of whitewashed walls and shuttered windows.

"Don’t panic, darling. I can speak a little Spanish. What’s Spanish for 999?"

She frowned down at him.

Already his hands were wrapped around her waist, bringing her down onto his chest, against which she beat outraged fists.

"I don’t know why I ever believe you." She tried to pull herself aloft, but he held her in a tight bear-hug and growled into her ear.

"Get back on that bed, woman. We have unfinished business."

Vanessa Robertson, still delighted and enthralled to be taking a summer holiday with her twenty-seven-year-old lover, pretended to slap his face before throwing herself back on to one of the beds. Ben rose from the gap like a foppish sea monster, all floppy hair and loose linen shirt, ready to pounce.

"What was it you had in mind again?" he asked, rolling smoothly beside her after shoving the beds back together. "Oh yeah." He looked down at the hem of his shirt, underneath which the outline of a cock in full erection was clearly visible. "I had some dessert for you."

"I don’t know if you deserve it now," grumbled Vanessa.

"No, I have some dessert for you. You get cream. I just get the pleasure of giving. It is more blessed to give than to receive, after all. Don’t feel bad."

Vanessa snorted. "You’ve got a bloody cheek. Trying to make me feel guilty about giving you a blow job. That’s spin-doctoring on a grand scale."

"I’m sorry you feel guilty, Ness. Perhaps you can make it up to me afterwards."

"Shut up or these lips are sealed." She drew an imaginary zip across her scarlet-lipsticked mouth.

He put one of his fingers to his own lips and nodded, then he knelt up and took off his shirt, revealing a tanned torso with a bit more definition than it had had when Vanessa had first met him.

His cock, though, was no different and just as mouthwatering as ever.

Vanessa had worn a bikini and sarong for supper, but now only the bikini remained, a red and white polka-dotted number that showed off her trim curves to perfection.

Kneeling opposite Ben, smiling wickedly, she reached behind to unclip the pair of triangles that constituted her top.

"Ooh," he said, when her breasts bounced out. "Want to touch."

"No. No touching. Just kneel up where you are and let me work you."

She bent her spine and let her breasts dangle either side of his upright shaft, then she pushed them together and gripped him tight. Slowly she rubbed him up and down in that generous cleft, sometimes bobbing to kiss and lick his uncovered tip.

"Fuck, that looks hot," he breathed. He reached a hand underneath to cup his balls and give them a squeeze. "I’m so tight. I’m going to burst."

"Impatient," she said, flicking her glance up at his pained face. "There’s lots and lots of things I want to do to you first. If you come before I’m ready, I’ll have to do even dirtier things to you."

His urgent whisper drifted over her head and she increased her pace.

"Never you mind. I’m not going to encourage you. You’ve a filthy enough mind as it is."

She laughed throatily, then released him from the breast-clamp, batted his hand off his balls and took a firm hold of the base of his shaft.

"Ready to go deep?" she asked. "And remember—don’t be too hasty."

"I’ll do my best but I’m not making any promises."

She held up an admonitory finger then she crouched low, circling the tip of her tongue down his cock as an introductory move before she sucked him all the way inside her mouth, from the swollen head to the rigid base, inch by inch.

Share what you thought about Close Harmony and earn reward points.