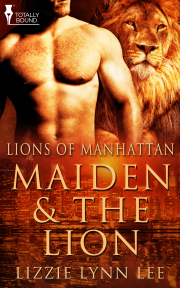 Maiden and the Lion

Book 2 in the Lions of Manhattan series

Some lions in town aren't locked in the zoo…

Twenty-one year old receptionist Beatrice Summer has the hots for her new boss, Alexandre Larousse. But Alex seems never to notice her. Bea understands. He's too handsome, too rich, and a tad too mature for someone like her. But it doesn't stop Bea from wanting him in secret.

One night, Bea witnesses a man being shot from a bridge. She swims after him and drags him to safety. She is shocked to find the victim is nothing but the boss she's enamoured with. What makes it even more shocking, the unconscious Alex turns into a lion before her eyes.

Bea doesn't think shape-shifters are real. Seriously. Werelions? They are nothing but a myth, right? Feeling more curious than a fickle cat, Bea is hell bent on spying Alex—especially when Alex tells her not to. Then, Bea discovers the reason why Mr Hot Boss pretends he never interested in getting into her panties. Bea had never thought playing detective can be so thrilling, sexy…and deadly.

The gunshot woke her up from her dream.

Beatrice Summer had been half asleep in the backseat of her ’96 Plymouth Voyager. She was startled, feeling groggy at first. When she realised where she was, her heart plummeted. Had she picked the wrong place to park for the night? She had chosen it because it was near the gym she had a membership with—where she took showers and did her bathroom business. She had been living in her minivan for the past two weeks, ever since she had left her drunken, abusive father’s house. She didn’t have enough money to rent an apartment, especially after her father had swindled her out of her savings. She only had forty-five bucks in her purse to tide her over until her next pay cheque. Then, maybe, she could afford a cheap motel room. But until then, the backseat of her car would have to do.

Bea sat up, peering into the rear-view mirror.

Nothing. Nothing but gloominess.

She had parked on a clearing at the base of the bridge, near a railroad track, where nobody—including police patrol—could harass her for illegal parking and sleeping in her own car. The Harlem River gleamed in the darkness beyond the windshield. A sliver of moonlight squeezed between the dark, cloudy sky, illuminating the surroundings. The scenery at this time of the year was quite picturesque. Leaves started to turn yellow in early fall. Temperatures cooled down. But having been homeless for the past two weeks, Bea found nothing thrilling about the outdoors. She would happily trade the uncomfortable seat of her car for a nice warm bed, if she could.

A second gunshot jolted her from the remnants of her sleepiness.

There it was again.

Bea cringed. She craned her neck past the driver’s seat. The sound had come from up front—the bridge.

Then, she saw it. A figure fell from the bridge and plunged into a river.

She’d just witnessed someone falling. Or an attempted suicide. Assault?

She caught herself when she slid open the van’s door. Did she really want to do this? Involve herself in something dangerous? She should call nine-one-one and let the police sort it out.

But that person could still be alive.

Shit. What should I do?

Bea decided to poke around a bit. If she was careful, nobody would see her. Yeah, Bea, you’re a big girl. You’re brave enough to walk out from that drunken monster of a father, so you can face this type of situation.

She tucked away her glasses in safety and slipped into her flip-flops. She climbed down from the van. After the gunshots and the big splash of water, all she could hear was near-silence. Not even a car passed by on the bridge. She crept towards a low-growing thicket and crouched. She eyed the bridge. Didn’t see anyone. Or a car. Or the person who had fired the gun.

Bea dared herself to crawl farther into the river bank. There was a gravely spot where she could get into the water without having to jump and make unnecessary noise. She squinted, trying to distinguish between the reflections from the water and if there was a body floating.

She looked up to the bridge again.

It was pretty damn high. If that person had survived the bullet, there was only a slim chance he or she would still be alive after diving from such a height. The impact alone would crush that person’s lungs the moment the body hit the water.

Did people float after they plunge into a river? Like dead bodies on TV?

She should call nine-one-one and report what she’d seen.

Her breath stalled in her throat.

She narrowed her eyes. At first, it was rather hard to spot, but it was there. A body slowly drifted along the current. The man was wearing dark clothes. Suit. Dark hair. His face was obscured by the water. Would he still be alive? Or was he dead already?

Her stomach lurched at her thought of touching a dead body.

But there was a chance he could still be saved.

Bea ditched her flip-flops and tiptoed into the water. She shivered. It was freaking cold. She crushed the last wave of hesitance and finally decided to swim silently into the river. Luckily, she was a pretty decent swimmer. She’d been part of the swimming team when she was in high school. A few dozen strokes and Bea was able to snatch the man’s collar. She pedalled back towards the bank. The man weighed a ton. Chills seeped into her bones. By the time she had reached the river bank, she felt as if she had competed for a marathon. Her lungs were burning.

Bea panted. She inspected the man.

Loved the cover who could not want to read about all that yumminess...Alex can no longer hold on to his feelings about Bea and let's his feelings be known. Oh how lives change for both. He still has...

Share what you thought about Maiden and the Lion and earn reward points.

Other books in the Lions of Manhattan seriesView Series Page