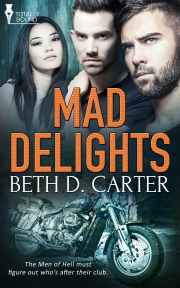 When violence sweeps through their town, the Men of Hell must figure out who’s after their club.

Someone is watching Romeo Barrigan’s every move. Chloe Matsumoto’s favorite pastime is studying the Men of Hell Motorcycle Club’s president. Ever since he helped rescue her deaf cousin from the hands of a human-trafficking ring, Chloe has become fascinated with him and now wonders how she can repay him.

Daxton Squire is the enforcer of the Men of Hell. He’s filled with self-loathing after failing to recognize the threat from the former club president. When he spots someone tailing Romeo, he vows to protect him at any cost. Only Dax didn’t expect to be so attracted to the little stalker.

Violence sweeps through Bair, Nebraska, threatening the town and the club. Romeo has a lot on his plate. Not only does he have to figure out who’s after his club, he also has to determine how the hell he ended up in a ménage relationship—and keep those he loves safe from the menace.

Publisher's Note: This book is the prequel to Madness Ends and is best read in sequence.

Publisher's Note: This book is linked to the Red Wolves Motorcycle Club series.

Romeo stood alone in the club’s chapel staring at the tainted chair that Shepard had corrupted when he’d sat in it as President. Much like the club, the piece of furniture had a dirty air about it that reeked of greed. He wanted to burn the damn thing, or take an ax to it. Shepard was dead, but that didn’t stop the self-loathing pumping through Romeo every time he remembered Shepard’s smug face. He’d known the bastard was the wrong leader for the club, yet he had accepted the VP patch and decided to drown the bad vibes in drink, drugs and pussy.

He ran his fingers over the large, oval table made of polished concrete that symbolized the unity of what the club should be. There was no fucking way to move it except by a crane. Wheels had always joked that it was their own version of the Round Table, taken from the mythology of King Arthur, and just like the legendary king, this table had its own share of treachery. Romeo had been with the club since he was thirteen, when Wheels had taken him under his wing to raise him as his own. The old biker had made sure Romeo could take apart an engine and put it back together, had taught him how to shoot straight but keep his nose clean. And, above all, Romeo had learned about loyalty.

The Men of Hell now seemed to lack that basic yet utterly important quality. Other than Dax, his best friend and the enforcer of the club, he didn’t know whom to trust. So many issues needed to be addressed. He hadn’t a clue where to start, although the logical place would be weeding out those still loyal to Shepard’s memory. Some of Shepard’s followers had left, some had sworn they didn’t know about his double cross or how he’d stolen money from the club. Some still stuck around.

Romeo jerked out of his morose thoughts and turned to see Daxton Squire standing in the doorway with his hands on his hips. They’d been through a lot of shit together. He hoped this brewing storm would simply be rocky waves they could ride out.

“Yeah,” he replied. “I’m trying to come to terms with the realization that Shepard wasn’t working alone. I know of at least one brother who had to be in on his trafficking operation.”

Dax sighed and Romeo saw his own feeling of resentment mirrored in his friend’s dark gaze.

“I know. I came to the same conclusion.”

“Either the books were doctored or there were two sets, I’m not sure which. And we have no clue as to how many others were involved.”

“A Ponzi scheme turned sour,” Dax said. He pushed his tall, muscular body from the doorframe and took his seat at the table. “You gonna sit?”

“Eventually. I just… It feels weird for me to sit in the chair, you know?”

“You belong in that chair,” Dax insisted. “You should’ve had it when Wheels decided to step down.”

“Maybe.” Romeo ran his fingers through his long hair. Guess it’s time for a trim. “I suppose I thought Wheels would be around forever. Stupid of me, or what?”

Dax shook his head. “No. Not stupid. I always thought he’d be around too, but that’s what kids think, Rome, that life is forever.”

“I didn’t want this shit.” He bowed his head. “This…responsibility.”

Dax tapped a finger for emphasis on the table. “Wheels told me you had the most level head out of all of us. If anybody is fit to lead the Men of Hell, you are.”

Dax opened his mouth to fire back, but Romeo waved off the argument. No, he didn’t need Dax to blow smoke up his ass. He knew his faults were glaringly obvious—at least in his eyes. Doubts crept into his mind now as he tried to figure out just what to do about the disloyalty inside the club. Shepard’s supporters still grumbled the old president’s name when they thought Romeo couldn’t hear. In those moments, he wanted to let his rage out, but he knew bashing heads wasn’t the answer. Yet he couldn’t be soft, else he’d lose the tentative grip he had on the club.

Other fully patched-in members entered the church and took their places around the concrete table. His VP, Boone Tempest, was the oldest member of the club, now that Shepard was dead, and that was the only reason he’d asked the man to be his right hand. Boone was a decent enough guy, big with sharp eyes that seemed to see everything. His ever-present shadow, Gabby Dixon, followed behind him. The man’s real name was Gordon, but he rarely ever said a word. Wheels had given him the ironic moniker of Gabby way back when, and the name had stuck. A scar ran from his temple to chin, but he never talked about it. The only thing Romeo understood was that the only person who knew anything substantial about the man was Boone. Romeo didn’t pry. Shit, they all had personal secrets.

The patched-in members allowed to sit at the table were from all walks of life. The MOH Bair chapter didn’t discriminate. Burrito was Hispanic, Sioux was Native American and Hook was African American. Romeo didn’t care about the color of a man’s skin. It was a person’s integrity that counted. His gaze lingered on the club accountant, Cipher. It was time that fundamental principle was made crystal clear.

The Brothers were quiet, and Romeo missed the joking and jostling from days gone by, when they’d had nothing else to worry about except the next drug run. When the last Brother had settled and looked toward him, he reluctantly sat in the goddamn chair and banged the gavel.

“There are some pressing issues we need to deal with,” he began. He glanced at each man, meeting their stares head on. “Obviously, we need to find a new supplier. This club is flat broke. The only thing keeping us alive is the whorehouse, so unless someone can cough up the money Shepard stole, we need some fast cash soon.”

He took a mental note of the glowers he received from Drifter and Bandit when he mentioned Shepard’s crime. Two more Shepard holdouts he put on his list.

“I might know of a crack and snow source,” Boone, the vice president, said. “Believe it or not, from Canada. Straight up Interstate 29.”

“Convenient,” Dax murmured. “We could get cheap Viagra while we’re up there.”

Romeo held up a hand, silencing them all in an instant. “Who?”

“A man calling himself Red Eye. It’s not meth, but I’ve heard his stuff is good, and the word is that he’s looking for a new distributing partnership.”

Romeo frowned. Could they be that lucky? “Sounds too good to be true.”

“That’s why we need to move now,” Boone replied. “If we get his shit, then we can blow the Shanks away. It’s far superior to the stuff they’re peddling.”

“Whatever drug we run, we don’t use it,” Romeo reminded him. “I don’t want the Men of Hell turning into fucking junkies, got it?”

The spot between Boone’s eyes creased as he frowned. “Of course.”

Romeo relaxed and nodded. “All right. You’ll follow up with this Red Eye?”

A chorus of ayes rang through the large, paneled room.

“Passed,” Romeo said. “Now, the next thing I must bring up is Shepard.”

He took notice of the way Drifter and Bandit stiffened, but they weren’t the fish he was after. Right now, he wanted the person who had helped in nearly leveling his club to the ground.

The chemistry between the three of them was amazing...so thick and raw and downright delicious. Chloe is one seriously whackadoodle chick, and I am utterly in love with her! Her special brand of cr...

Share what you thought about Mad Delights and earn reward points.

This is linked to your Red Wolves Motorcycle Club series. Why did you choose to write this as a spin-off?

Sometimes, a secondary character can be really charming simply because there’s no pressure to develop their backstory.  They can be larger than life.  So when I wrote the fourth Red Wolves MC book, Lily Roar, I introduced a new character named Romeo.