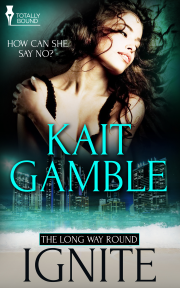 Book 2 in the The Long Way Round series

Natalie Carter raked her hands through her hair for what felt like the millionth time that day. Or was it night? She had no idea. The hours had started running together not too long after she’d sat at the computer to stare at the screen. Judging by the number of mugs on the desk, it was either very late or really early. Not that it mattered, she wasn’t going to quit until she found the glitch in the code that mocked her. It defied logic—at least, her logic. She reached for her coffee mug and sighed when she found it empty.

A look at the clock at the bottom of her screen caused a groan to rise up her throat. She’d been at it all night and had resolved maybe three of the issues. The last one proved to be the most stubborn, as always.

Leaning over the back of her chair, she stretched. Going to bed was out of the question. She needed to keep working while it still made sense in her head. A short break was in order. A little fresh air, a tankard of coffee and she would be fine.

She stood and quickly did a few squats, toe touches and arm stretches. It helped, but it wasn’t enough. Spinning on the spot, she shifted books and magazines out of the way, so she could do some burpees. That would get the blood flowing.

She managed four and was mid push-up for number five when her cell rang.

Natalie hopped to her feet and grabbed it. A quick look at the name on the display brought a curve to her lips and unleashed a torrent of butterflies in her stomach.

She answered with a swipe of her finger. “Sebastian? Long time.”

“Nat, I’m a few minutes away. Just wanted to give you a heads up.”

Her breath hitched at the deep, husky timbre of his voice.

Natalie’s panicked gaze swept over the room as she managed a throaty, “Great. See you soon.”

Natalie dropped the phone and immediately started tidying. It wasn’t as though she lived in a sty. There just hadn’t been enough time over the past week to put things away properly. Industry books and magazines lay where she’d dropped them. A mini mountain of shoes had made a home under her desk where she usually kicked them off mid-brainwave in an attempt to get comfortable. A basket of clean laundry sat unfolded on her couch. Take-out containers littered her kitchen counters, along with a parade of coffee mugs.

She ran through the small space like a reverse tornado, clearing up the debris of her daily life.

Natalie had managed to clear it all up, open the curtains and windows, change into a pair of jeans and a top that was relatively unwrinkled and pull her wavy chestnut hair into a ponytail by the time there was a knock at the door.

She jammed a stick of gum in her mouth as she crossed the room to open the door and was greeted by Sebastian—all six foot four of him. He looked good. His black hair was tousled as if he’d run his hand through it a few times. Gunmetal gray eyes sparkled with mischief and—even with the comical grimace twisting his features—he was as handsome as ever. Dressed in an impeccable suit and tie, he could have just come out of a meeting. The impact he had on her was immediate. A flush of heat climbed her chest as the air rushed out of her lungs.

Natalie flipped her ponytail over her shoulder and managed a breathy, “Hey.”

Sebastian bowed, a gallant knight presenting his queen with tribute he held out a cardboard carrier laden with coffee in one hand and the most decadent cream-filled scones in the other. “I come bearing gifts.”

Natalie wasn’t surprised to see the coffee, but for him to look so sheepish and to come with the one pastry that he knew was her weak spot? Something was definitely up. She stepped aside. “Come on in.”

The friends to lovers trope is one of my favorite – something I never get tired of. That is the theme within this story and I absolutely adored Natalie and Sebastian together! As college friends, they...

Share what you thought about Ignite and earn reward points.