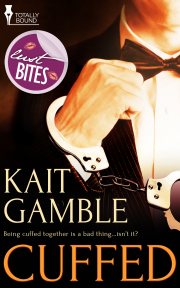 Being cuffed together is a bad thing…isn’t it?

Scarlett never imagined that she would be famous from her YouTube channel, but to be popular enough that a rival decides to cuff her to someone else as part of a publicity stunt? Ludicrous! Most unexpected of all is her attraction to the man she’s chained to—fellow YouTuber, Jackson.

Jackson has always thought Scarlett was an attractive woman, only he never thought she felt the same about him. So when he realizes she isn’t totally against being cuffed to him, Jackson decides to take advantage of the situation and see just how far he can push her limits.

It turns out that handcuffs are the best kind of torture.

There were only a few time and place convergences on the planet where a person could walk into a room and see The Joker hanging out with Ahri from League of Legends or The Team Fortress guys flirting with GI Joe’s The Baroness. The magical madness of Comic Con was never lost on Scarlett.

A blinding burst of camera flashes slowed her pace. It took a moment of blinking before she could see past the spots in her eyes.

“Scarlett! Oh, my God, it’s really you!” A gaggle of teens swarmed around her. “Will you take a pic with us?”
“Of course.” Scarlett immediately found herself surrounded and quickly blinded yet again by flashes. After a flurry of weird poses, a rotating carousel of selfies and much squealing they dispersed to share pics and upload to the social media site of their choosing.

Only one of the girls hung back and stared at Scarlett. It was obvious there was something she wanted to say, but she just couldn’t work up the nerve.

Scarlett smiled. “These things are always insane, aren’t they?”

Her face lit up. “Yeah. Have you been to many?”

“The past three, actually.”

Color flushed her cheeks. “I knew that. I’m a huge fan. I’ve watched all of your videos at least three times. Especially the one where you call out Jackson Reach for being an asshole. I mean, his channel, Reach Round? What even is that?”

Scarlett laughed. “That was quite a while ago. Jackson and I have come to an understanding.”

Her eyes widened. “So he believes that you’re a gamer now? Just like that?”

Scarlett leaned in and whispered, “I might have destroyed him in Halo a few times.”

The girl burst into laughter. “That’s amazing. You’re awesome. I’m thinking of starting a channel. Was it hard to do?”

“Nope. Just be you and make sure to keep it up even if no one’s watching. The viewers will come. If you tweet or email me the link, I’ll bring you up on my next show, if you want.”

Scarlett could almost count the stars in the teen’s eyes and she bounced excitedly in a little circle before throwing her arms around Scarlett. “Thanks so much! You’re amazing!” She let go and squealed her way back to her friends.

Moments later, there was a collective scream and more flashes. It was quickly followed by a string of Twitter alert chimes from her phone.

Feeling good, Scarlett wandered around more. She wasn’t due to be on a panel for a little while so she didn’t see the harm of roaming and soaking in the atmosphere. It felt great to be around people who were interested in similar things.

Then she saw something that made her stop dead in the middle of the heaving mass of people. It took all her faculties to forcibly stop herself from pointing and giggling herself off her feet.

Amid all the costumes, one figure stood out from the rest. It might have been the perfect black tuxedo, or the figure that filled it out so nicely, but the rose top hat and mask just put the costume into the realm of ridiculousness that made the wearer stand out like a sore thumb. Scarlett had to grab the wall to keep from falling over in laughter. Not only because it was the silliest thing she’d seen in a long time, but because of who was in it.

Kait Gamble's Cuffed was sizzling hot fun wrapped in a pretty little package. It was definitely one of those short stories that I would give anything for it to be longer. I loved the instant c...

Cuffed is a short but exciting & super hot read. While I had a great time getting to know Scarlett and Jackson, it was their moment alone together that had my breath hitched and my heart stopped f...

Share what you thought about Cuffed and earn reward points.

I love trying out new things, whether it involves travelling to a new place, trying out new food or drink, or a new activity—I’m usually up for it all. Well, all except the biggest and fastest rollercoasters. There are just too many things about them that put me off, but I digress.