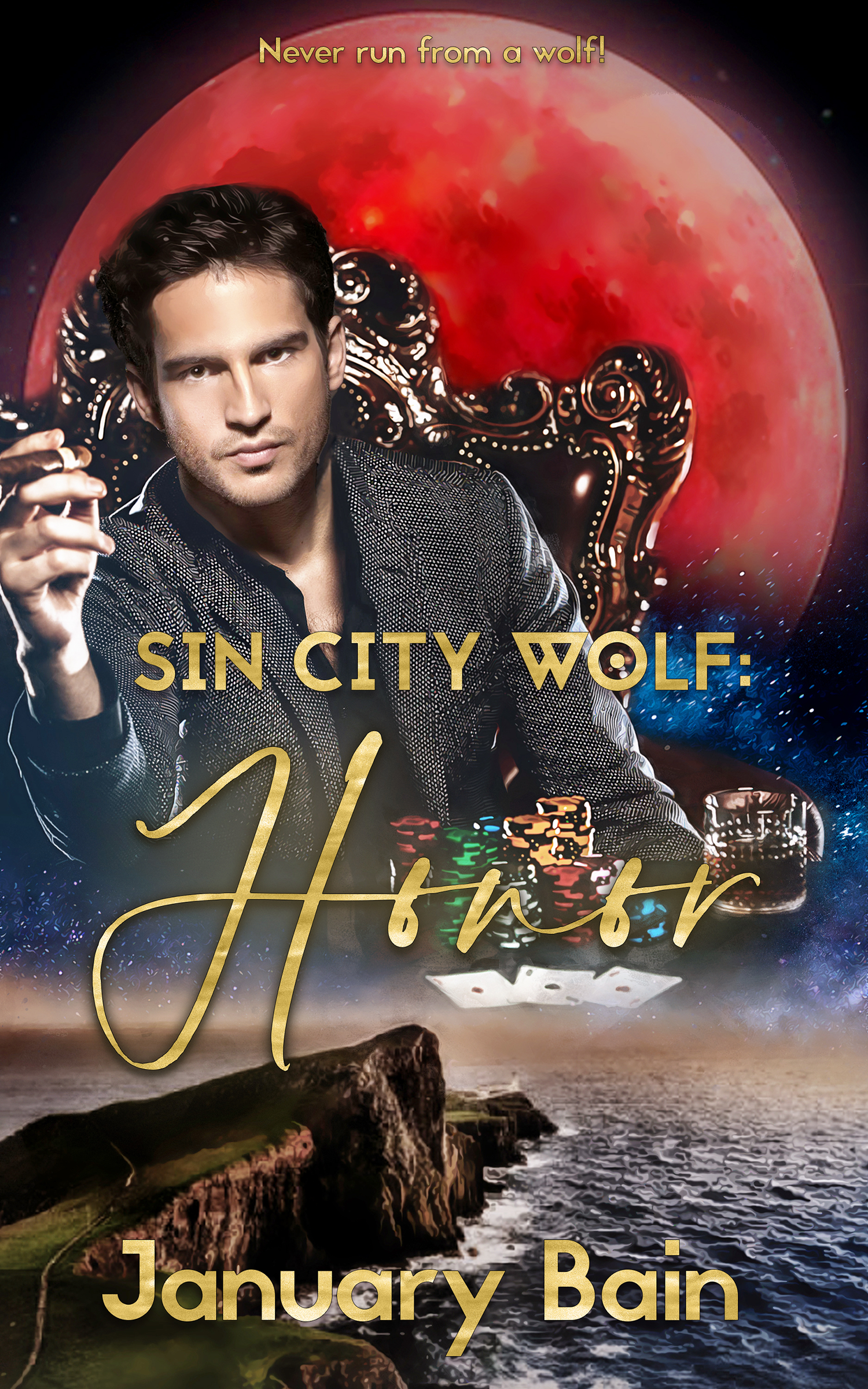 Never run from a wolf!

Isadora Champagne is a witch on a dangerous mission—to take down Lucius Luceres. That bad boy alpha billionaire doesn’t deserve to have it all his way. Thinks he can dump her baby sister and get away with it! But now that she’s met the shifter, keeping her heart safe from him is going to take more than the curse she laid on him…it just might cost her a pact with the devil himself.

Lucius of the House of Luceres is an alpha werewolf, secure in his bad-to-the-bone reputation. But when confronted by the beautiful Isadora one fateful night, even he can’t ignore the extreme attraction that instantly ignites between them. But what he hadn’t counted on was how useful her magic gifts can be to the House of Luceres when one of their own goes missing.

Will he be able to set aside the centuries of mistrust between witches and shifters and allow her special brand of courage and caring to heal even the most jaded heart?

“Look! There’s a halo around the moon tonight, Lucius. You know what that means?” Veronica purred. Her mouth was coated in far too much red lipstick for my liking, though I more than appreciated her luscious body and adventurous spirit.

“What do you think it means?” I asked, not particularly interested in her take on it. I couldn’t imagine the notorious party girl having done much digging into mythology or history.

If I wanted facts, my twin brothers, Maximus and Alexandro, would be the ones I’d call on. One of the things I did like about Veronica’s type though—easy to forget. I didn’t need any complications as enforcer for the House of Luceres beyond those necessary to protect my pack.

“It means something momentous is on its way. Could be good. Or evil. It depends on the intentions of the spirit.” Veronica shivered for effect in a dress that barely covered essentials. She looked up at me, her eyes huge, reflecting not only the light of the roaring bonfire kept alight for the entirety of the Lupercalia festival, but I swear I caught a glimpse of myself.

Easy to look at, I’ve been told. Like all my pack brothers, I kept my GQ looks highlighted with exercise and good grooming. And all the Luceres were blessed with good genetics and lots of money.

The howling of a lone wolf in the distance cut short the woman’s unexpected announcement and I went on high alert. In the desert, on a clear night such as this, sound was deceptive. The interloper could be miles away…or nearby.

I glanced around the firepit, checking out the pack members milling about. Emily, one of the cousins, was dancing with wild abandon. I frowned. Wasn’t she a bit young for this? The festival was notorious for events that would curl a human’s hair. Rumors abounded and things that probably should not happen…happened.

Case in point, headed right toward me was a former one-night stand, her finger pointed at me like she had something to say. Something I was certain I would prefer not to hear. What was her name again? Serena, Simona, Sawyer…

Before it came to me, she was right up in my face. “Lucius Luceres, I got some…thing to say to you you’re not go…ing to like.” She poked at me with a sharp red fingernail, her words slurring and her body language suggesting something vastly different.

“Step back, if you know what’s good for you, cur!” Veronica yelled at her.

Right, Simone, one of the more jealous ones. Why was one night never enough for them? Not like I ever promised anything more. I stepped back. Let them have at it. A gorgeous female standing farther from the fire winked at me, her eyes taking in the foolish provocation with obvious interest. I gave her my patented cool-billionaire smile.

She replied with an air kiss, pulling me forward with all the magnetic pull of true north. Just the way I liked it. And man, those curves, highlighted in a tight dress that leaves nothing to the imagination.

“Hey, where are you going?” Veronica quickly noticed my mental desertion…soon to be followed by a physical one.

I turned back and sighed. The two women had each other by the hair. Soon they’d shift, by the look of things. I didn’t want the hassle, but after all, I had caused it, even though they’d both been warned that I never dated.

“Come on, ladies, the festival is almost over. Wouldn’t you rather be having fun than fighting?”

“This is fun! I’m going to beat her ass!” And with that Veronica shed her clothes and shifted, one second vanishing through the otherworldly portal in a shimmer of light, and in the next back again as a blue-eyed gray wolf. It had been explained to me by my scholarly brothers that the dimension was only one of the eleven that create the multiverse. Whatever. I was just satisfied it worked.

I mean, who doesn’t want to be wolf?

One second later, Simone followed Veronica, her leaner and meaner wolf appearing in a flash of light. Of course, she was the more perturbed of the two, giving her the edge. The pair squared off. Simone growled as she lowered her head to bully her opponent, the thick ruff on her spine fully erect.

Instantly, others picked up on the change of energy. Bodies began streaming in from everywhere, surrounding the two females in mere seconds. This was what the pack wanted. Craved. The music shifted, became a louder drumbeat that stirred the blood.

I gave a nonchalant shrug to the gorgeous female on the sidelines watching the antics as if to say, What can I do? Females will be females. She rolled her eyes.

Turning back to the action, I decided not to intervene in the fight, not unless they began to inflict real damage. These kinds of fights could be more about posturing than anything else, useful for ratcheting down minor disagreements and aggressions. Which was why this festival was held in the first place. It allowed pack members time to listen to their wolf, step away from the imposing limits of civilization. Freedom, baby.

But I had apparently misjudged the level of anger and animosity between the pair. Claws and fur flying, they lunged at each other, rolling in the desert sand and sending a blanket of dust into the air.

The crowd roared their approval. Someone had appointed themselves the holder of the bets and numbers were being tossed around the ring like confetti. Eager faces, alight with the excitement I’d imagine rather common to the Colosseum of ancient days, began to holler loudly for their favorite. Seemed that Simone was holding sway, her anger the most apparent to the catcalling crew. Hell, half of them were half undressed now, probably looking to take a turn.

Great, a bloom of blood had appeared on Veronica’s fur. Now I had to shift. Not really a bad thing, as I loved to be wolf. The power, the freedom, the pure sense of being removed from this world—it didn’t get any better.

I shucked my clothing, knowing I was being checked out by the new female. Have at it. I’m choice. I jumped into the fray and in seconds, had Veronica by the scruff of the neck, subjecting her to dominance, forcing her to give over to her alpha. She whined, then lay down. Simone stood on four stiffened paws, her tongue lolling, still defying me.

I flew at her, catching her by the throat, taking her down to the ground. Not hard enough to break the skin, but enough to inflict some pain. She needed to learn her place.

When she gave me proper respect, I let her slink away, then dusted myself off and redressed. The interested female was still watching, and I nodded at her. She sauntered over, her spectacular hips swaying to the rhythmic beat of the snare drum one of the pack members was pounding on, her smile coy.

The crowd clapped and stamped their feet loudly, naked breasts bouncing to the delight of the males who watched with approval, obviously having enjoyed the show. Money was paid out to the victors and backs were slapped. Just another night at the Lupercalia. And mild compared to some events I won’t get into.

“Nice moves,” she said, getting closer enough to pick an imaginary piece of lint from my jacket.

“I take it you’re not worried that a rare witch moon is causing chaos this night?” The new female pointed at the night sky. A dark cloud was now creeping across the luminous surface, lending an even more eerie appearance to proceedings.

“Witch moon? Where did you hear that?” A cold finger traced my spine. I shook the odd sensation off. An old wives’ tale.

“Big strong wolf like you—you have nothing to fear.”

The warning from an elderly Italian relative came to mind. Well, not like I had any in my pack or knew of any in my round of acquaintances. And I certainly wouldn’t bed one. Now, the wolf throwing herself at me at the moment, sure.

Share what you thought about Honor PRINT and earn reward points.

Other books in the Sin City Wolf seriesView Series Page