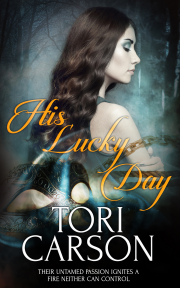 KT thought a quick romp in the forest with Stephen would vanquish him from her dreams, instead, their untamed passion ignites a fire neither can control.

Stephen was instantly attracted to the exotic KT Riley. Though she makes her desire for him clear, Stephen considers her forbidden fruit. His sexual passions aren’t for the faint of heart so he refuses to mix business with pleasure. When they become stranded together in the forest, the chemistry between them is more than he can resist.

KT is a woman on a mission. Seduce the handsome game warden who has been destroying her concentration and get him out of her system once and for all. Her plan was foolproof except for two small miscalculations. The man isn’t the forgettable type and the sex goes beyond physical gratification. It’s all-consuming—a craving from which she’ll never break free.

Kat had been methodical in her preparations. She’d researched Stephen until she knew his weaknesses, then she’d devised her plan. Ever since she’d met the tall ex-Marine at the Association of Fish and Wildlife Agencies—AFWA—annual meeting, he had become an obsession that she couldn’t afford at this point in her life. Her time was precious. With her doctoral thesis deadline fast approaching, she needed her wits about her. Instead of focusing on her paper, all she could think about was the firm jaw and challenging eyes of the local fish and game bureau chief.

In the agency’s parking lot, she leaned against her truck’s fender and went through her checklist one last time. Everything was accounted for. A smile lit her face. Twenty-four hours from now she’d have her life back.

She’d met his type before. Their confident swagger and hint of intelligence usually hid one of three things—a misogynist, a braggart or a bore. All she needed was to find which category to file the sexy man in, then she’d be able to concentrate again.

She stuffed the list into her pack and entered the lobby.

The perky blonde with her sun-kissed waves held in place by a thick hairband set Kat’s teeth on edge. So the man likes a bit of eye candy in his office. Strike one. “KT Riley to see the bureau chief.”

“Could you please let Stephen know I’m here? I only need a few minutes of his time.” She didn’t know him well enough to call him by his first name. They’d only spoken a few times, but she could repeat each conversation almost word for word. His deep baritone voice had a way of reaching inside her and curling her toes.

“One moment.” The blonde spun her chair around and headed deeper into the office.

Kat couldn’t hear the receptionist but she could understand Stephen clear as a bell. “About five foot eight, brunette, green eyes?”

It took a bit of doing, but Kat maintained a professional mask as Miss Eye Candy led her into the bureau chief’s office. As soon as she entered, he stood and reached out to shake her hand.

“Ms. Riley, this is an unexpected pleasure. How can we be of service?”

“It’s good to see you again, Dr. Andersen.” She couldn’t help but notice the way his hand engulfed hers. She wasn’t a demure woman by any stretch, yet next to this man, she felt petite and feminine. It was distracting.

“We don’t stand on ceremony here. Please call me Stephen.” He waved her into the chair opposite his.

“Thank you. KT works better for me. When I hear Ms. Riley, I think my mom is in the room.” She sent him what she hoped was a megawatt smile. “I know your time is precious, so I’ll get right to it.” He’d been much more personable than she’d expected. From what she’d heard, he despised small talk and tended to be strictly business. “I’m in the home stretch of my doctoral program.”

He interrupted her, “I caught your talk at AFWA. Very informative. I think your management suggestions were right on the money.”

The air left her body in a rush. You agree with me? She didn’t have to try to sell the importance of her project? Kat had anticipated all the various arguments he’d throw at her and she had counterpoints to all of them. Never once had she imagined he’d just agree with her. She didn’t know what to say. He’d done the impossible. He’d thrown her off-balance.

Why is it suddenly so warm in here? Did Miss Perky decide to sweat me out?

“Thank you. I’m glad to hear you say that.” She stumbled through the pleasantries and tried to get her mission back on track. “I’ve had a report of an ocelot sighting in the Huachuca Mountain range. We’ve caught a glimpse of her on a camera at a watering hole. She appears to be pregnant. If I can get proof, it will be a huge boon to my project.” She could tell by the raise of his eyebrows and upward tilt of his chin that he understood the importance of the sighting.

He gave a soft whistle then sat back in his chair and swept a hand through his immaculate, sandy-blond hair. “We’re outside their home range. Every now and then we’ll sight a male exploring new territory, but it would be quite the coup to spot a female. If she has a den in the area, you’re talking a major breakthrough.”

Kat pulled her tablet from her pack and brought up the series of pictures. She slid it onto his desk, a little shocked that he hadn’t demanded proof or discounted her tale.

He took his time reviewing the images. They were grainy, black-and-white night shots. She’d already had one professor argue that it had to be a bobcat. It clearly wasn’t, but there was no convincing the pompous windbag.

He handed the tablet back to her. “Not the best photos. We really need to get some better equipment out there.”

“It would help if we didn’t have to disguise them as bird feeders and such to keep vandals from destroying them,” she pointed out.

“True.” He leaned back and placed his hands on the armrests of his chair. He looked as though he was ready to walk her out. “What do you need from us?”

“I’m heading out there to get scat samples and, if possible, identify her denning locations. I’ve got a professor on my advisory team that won’t look at any evidence that hasn’t been verified by an outside agency. I had arranged for a US Fish and Wildlife biologist to accompany me, but the forest fire shifted and they’ve called for all hands on deck. There’s a winter storm expected to hit the area early next week, so I can’t wait it out,” she explained.

He pointed to the roster behind her. “All my teams are out in the field. We’ve got five ongoing projects and nowhere near enough boots on the ground to gather all the data before field season ends. I’ve been stealing bodies from the fisheries branch to have ample hands available. I’m sorry.”

“She’s pregnant and due any time. I think she has a couple of dens prepared near the watering hole.” On her tablet, Kat opened her GIS program and brought up several maps. She laid them one over top of another until she could show him the area she believed the ocelot was using. “Those images were taken over a week’s time. That means the cat is likely foraging in this area.” She used her stylus to highlight the sectors she wanted to visit. “With your help, I think we can scout the area, collect the necessary data and make it back to civilization in time to enjoy a steak dinner—on me, of course.”

“You think she’ll be bedded down in a tree during daylight hours.”

She nodded. “We had a light rain in the area last night. We should be able to track her from the watering hole.”

Amusement passed across his handsome face as he shook his head. “Your talk made it sound like you were familiar with cats and our rugged terrain. How much time have you actually spent out in the field?”

There was the arrogance she was used to. “Would you like to see my resume? Perhaps you’d like to speak to my references and make sure I’m not wasting your time.” She turned off her tablet and slid it into her pack. “I wasn’t trying to make it sound like a walk in the park. It will be a grueling couple of hours. We’ll need to cover a lot of ground, and frankly, our chances of spotting the cat are excruciatingly slim. However, if we can find scat or other physical evidence that she’s in the area, I’ll be a step closer than I am right now.”

He sat with his fingers steepled for a moment. “I have meetings scheduled most of the day.”

Disappointment hit her hard. When he’d remembered seeing her then complimented her work, she’d thought she was all set. “Okay, I’m sorry I couldn’t persuade you to enjoy a day out in the wilderness. Sometimes hearing the wind whistle through the pines does a body good. Enjoy your meetings. I’ve got a cat to track.” She wanted to saunter out of his office like it didn’t matter whether he came or not, but she made the mistake of meeting his gaze. Like a field mouse staring into the fixed eyes of a hawk, she was frozen in place.

She watched as his eyes hardened and the cocky amusement vanished. The transformation riveted her. When he looked at her like that, she found it difficult to draw in enough air to keep her brain working.

“You interrupted me,” he said, “and you hit below the belt. No self-respecting biologist would prefer a day in the office over field time.”

“I will admit that I’m curious why a man with your credentials chose to ride a desk instead of getting his hands dirty.” As soon as the words left her mouth, she wished she could recall them. She wasn’t baiting an ordinary house cat or even a bobcat. Hell, she’d just baited the king of the jungle.

The tick of his jaw was the only evidence that she’d landed a solid blow.

He pulled a set of keys from his desk. “I’ll meet you out front in five minutes.”

Share what you thought about His Lucky Day and earn reward points.