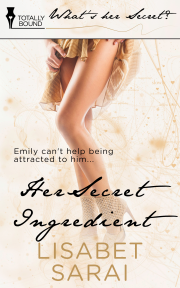 Stir in a pinch to stir up his passion…

When the Tastes of France food channel offers Mei Lee “Emily” Wong a series of guest spots, she jumps at the opportunity to take her culinary career to a whole new level. Ultimately, she wants a show of her own, but first she has to prove herself to Michelin-starred network founder and effective dictator, Etienne Duvalier. A legend in the world of classic French cuisine as well as a domineering perfectionist, Etienne is sceptical about the culinary abilities of a woman from Hong Kong. To make things more difficult, the master chef is also so gorgeous that Emily can't help being attracted to him.

Emily tries to solve both problems by spiking her luscious profiteroles with an ancient Oriental aphrodisiac. Unfortunately, Harry Sanborne, the low-key, bespectacled producer for Emily's show, samples the delicacies she intends for Etienne's consumption. His powerful reaction to her secret ingredient comes as a pleasant surprise to them both. Harry turns out to be far more impressive in bed than on the set. However, he can't do nearly as much to advance her ambitions as Etienne. Emily tries once more to tempt the exacting M. Duvalier with her special cooking as well as her feminine charms. The outrageous results threaten to end her TV career forever—until Harry steps in to save her reputation and claim her heart.

“Ginger? Do I taste ginger?”

Etienne Duvalier fixed me with a look that would have withered spinach. I straightened my spine, smoothed my apron and attempted a placating smile.

“It’s good, though—isn’t it? One of my signature dishes at Le Belvedere.” It had come out perfectly, the succulent meat melting off the bone at the first touch of a fork. I held out another portion, my own mouth watering at the rich, complex aroma. I wasn’t about to mention the hint of cloves to a traditionalist like Etienne.

He shook his head and wagged his finger at me like some cartoon schoolmaster. “A French restaurant in Hong Kong! Not exactly the place I’d recommend for the experience of classic Gallic cuisine.”

“A restaurant with three Michelin stars.” I wanted to go on, to cite the awards we’d won since I’d taken over as head chef, the praise heaped upon us by the local media, the favourable review in last month’s Gourmet magazine. But what was the point? He’d seen my résumé. Indeed, he’d signed the letter inviting me to the U.S. for a series of guest appearances on his precious Taste of France channel. Now that I’d arrived, was he having second thoughts?

My silence must have recalled him to some sense of etiquette. He leaned toward the morsel I offered, sniffing it before taking it into his mouth and chewing thoughtfully. His full attention appeared to be focused on the flavours unfolding on his tongue. I shifted my weight from one foot to the other and swept a stray lock of hair back under my cap, awaiting his verdict.

I’d known what I was getting into. Etienne Duvalier was legendary as much for his perfectionist dedication as for his culinary prowess. He took a purist’s approach to French cooking. As far as Etienne was concerned, fusion was a dirty word. He eschewed the creative syncretism practised by the latest generation of chefs, preferring to stick with the time-honoured recipes that had made French cuisine arguably the most famous in the world.

This delicious quickie read is easily navigable in an evening. I've always been a sucker for books set in the kitchen, and even as outlandishly over the top as this one is, it was a lot of fun…light-hearted and s...

Share what you thought about Her Secret Ingredient and earn reward points.