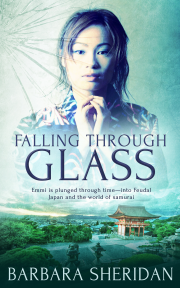 Emmi Maeda comes into possession of an antique and plunges through time—into feudal Japan and the world of samurai.

Emiko ‘Emmi’ Maeda set aside her studies following the sudden death of her father. Estranged from her mother and brother and burdened with guilt over her role in the tragic accident, she moves in with her godfather Jake and comes into possession of an antique mirror. While accompanying Jake to Japan on a film shoot, Emmi is caught in a freak storm and plunged through time—into the land of her ancestors.

The city of Kyoto is ablaze with violence and on the brink of civil war. Nakagawa Kaemon is a young samurai with a secret. He gathers information on those who claim to revere the emperor but harbor their own agenda to control the country. Kae is honor-bound to execute anyone who poses a threat to the throne—even if it is Emmi, the unusual young woman he has come to love.

Publisher's Note: This book has previously been published elsewhere. It has been revised and re-edited for re-release with Totally Bound Publishing.

Emmi Maeda couldn’t help but smile as she stuffed the registration paperwork into her bag. Six months ago she’d barely wanted to live, let alone think of attending college, but now she had a chance at a new life. How freeing it was to finally be moving forward again. Nothing could bring her down today…

She paused in the middle of the wide corridor, sadness stirring to life at the sight of the memorial plaque honoring her father. Inhaling slowly, Emmi concentrated on the photo near the plaque. Her father’s bright smile assured her that everything would be okay. At least it would be better. Stepping across the hall, Emmi touched her fingers to the photo frame and continued on her way. She clung to the hope filling her and bounded down the stairs into the sunshine bathing UCLA’s campus.

She was standing outside looking over the list of books she’d need when her godfather, Jake, rang her cell.

“I’m done with translations, kiddo. I’m about to head out to that meeting. Do you want to come along and get a free lunch on the studio?”

“Sure. I’m over by the student center. There’s a charity rummage sale happening. I’ll be wandering.”

Emmi tucked her phone into her pocket and stared at the long table before her. More specifically, she stared at the not terribly pretty and definitely not shiny thing that caught her attention. It was an old mirror, a vaguely familiar mirror.

The mirror was about eighteen inches tall and set in a badly tarnished brass frame. One of the side supports was loose. The rectangular, boxlike base had a dent on one side, and the silvered coating on the mirror’s glass was flaking terribly around the edges.

An old Japanese superstition she’d learned as a young child echoed in her mind—like Alice’s looking glass, there was another place behind mirrors where an oni, a demon, lurked. If you were careless and stared too long, or let the mirror look out into the room, you were leaving a door open. She’d thought it was silly, but could still hear her grandmother’s words. ‘The oni in the mirror will get you if you’re careless, Emiko-chan. Keep the mirror covered if you’re not in absolute need of it.’

If any mirror had an ancient Japanese demon waiting to take her soul, this one did. Still, she wanted—she needed—to own it, weird vibes be damned.

She touched her fingertips to the mirror’s frame, only to jerk her hand back. Surely she hadn’t imagined it. The metal had vibrated. She touched it again, picked it up. The vibration became steadier. She should put it down and run the other way, yet she had to have it. Curiosity overrode her fear. She needed to have this—

“What? Did someone beat you to all of the pretty and the shiny?” Jake asked, interrupting her thought.

Emmi opened the trash bag the girl at the table had just passed to her. “I can make this kind of pretty and shiny, once I find something to polish it with,” she said, a little defensively. “Do you think it’s brass?”

“Could be. The overall styling makes it look Japanese.”

“I know. It sort of reminds me of the wooden one my grandmother got from her grandmother.”

Jake nodded. “After lunch, we’ll find a hardware store and pick up some polish.”

The lunch meeting with the movie execs began with sympathetic looks and empty comments about how much Emmi’s late father would be missed in the industry. Emmi smiled cordially when one said he hoped she, her mother and brother were getting on all right. Things were far from all right, they could never be right again, but Emmi decided to just nod and let them get on to their business with Jake—coordinating stunts for a historical action film to be shot partially in Kyoto and Tokyo.

With the topic of discussion turned away from her life, Emmi thought about staying with her grandparents in Hawaii for a while. They’d been asking her to come for months, and since she’d arranged to make up some of her classes via a new online program, nothing was holding her back. The thought of staying with her grandparents was starting to sound good, despite their ultra-conservative belief that unmarried girls under twenty shouldn’t date unless an arranged marriage was part of the bargain.

Emmi was picking apart a breadstick and deciding between taking a tankini or a one-piece to Hawaii when Jake tapped her on the arm. That’s when she noticed the casting director was staring at her. A lot.

“I’m sorry. Did you say something?”

The man nodded. “How would you like to be in the opening scene? There’s no dialogue per se. All you have to do is look pretty and scream. You can scream loudly, right?”

Emmi looked around. The place was crowded, and this was a nice restaurant, not a fast food joint. People just didn’t go around “auditioning a scream” in a place like this.

Then Jake had to go and say, “Go for it, Em-chan. Kenny would want you to.”

Emmi smiled. Her father’d had a twisted sense of humor, and he would have liked to have seen this.

Still, her heart pounded, and she felt like such an idiot. How could she scream for no reason? She was no actress. She wanted to work behind the cameras someday, not in front of them.

Jake grinned his encouragement, making her feel even more pressured. Emmi tried to remember everything she’d ever heard about actors calling up personal things to help bring life to scenes.

Then, it came to her—the accident. She saw the kamikaze gull heading straight for the car. She heard its screech and the squeal of the car’s brakes as she instinctively slammed the pedal with both feet. She felt the impact of metal against metal…

Everyone in the place was staring, and Emmi wanted to crawl under the table and die. She pulled away and ran for the Ladies room. Her body shook. Her stomach ached and tightened. She went to the sink and doubled over, certain she was going to throw up. It seemed like forever before the queasy feeling passed, but once it did Emmi splashed some water on her face and forced herself to go back out to the restaurant.

Luckily, Jake and his movie friends were finishing their lunch. Some people stared, but she kept her head held high. The casting director smiled at her.

“Miss Maeda, you’ve got the part in the opening scene if you want it.”

Emmi looked at Jake. He gave her that same proud look her father used to give her. Tears stung her eyes—her dad would have been all over this moment. She was not going to cry. She’d embarrassed them all enough for one day. 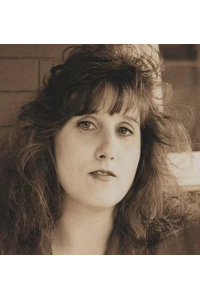 This story was amazing! I loved the way Ms. Sheridan wove the past and present together while maintaining the integrity of historical fact.

This book is so well written. The emotions...

Share what you thought about Falling Through Glass PRINT and earn reward points.