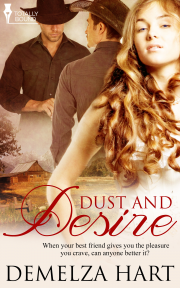 When your best friend already gives you the pleasure you crave, can anyone better it? But tough lives call for tough decisions.

Chase Truman is a man under pressure. He’s got a five thousand acre ranch to manage, he’s lost Blue Ridge mountain, and he can’t find himself a woman. But when he stumbles upon Riff Felton, the man who stole Blue Ridge from him, and finds himself held with a gun against his head, he doesn’t resist. His relationship with Riff goes way back, and soon Chase and Riff are making up for lost time, soothing each other’s pain in the way they love. But something’s missing. Chase wants more and thinks he’ll find it in the right lady. Luckily for him, a breakdown on the railroad is about to deliver Miss Adeline Monroe into his hands, a headstrong, wealthy young woman from Boston with a very modern attitude. But is there room for two in Chase’s life?

The setting sun turned the distant hills a burnished russet as Chase Truman set off on his dusk ride to scout the perimeter of Redhorn Ranch. After the wrangles and rows he’d put up with earlier, he felt himself settling as he looked over the unchanging vastness of his land. How could any man want more?

His father was on his back again, taunting him about the loss of Blue Ridge, hounding him over settling down and finding a good woman.

Fireblade, his mustang, shook his mane in agitation at something—rattlesnake maybe. The cool mystery of night brought out all kinds of creatures—Chase knew that all too well. His horse—ever steady, ever reliable—walked on, picking his way carefully through the dust and burrs of the west Texas earth.

Chase took him right to the edge of the near acres, to the point where the land became even wilder and more open. It was still the Trumans’, had been for an age, but out there was something else, wild and untamed. The cattle grazed and moved across it, and although the Truman name may have been on the deeds, it never felt as if it really belonged to them properly. He adjusted himself in the saddle and gazed out as the sun disappeared over the ridge. There it was, that far hill that haunted him, giving off its strange grey-blue tinge. They had thousands of acres—why more? But his father had wanted it all his life, and Chase, in his father’s eyes, had lost it.

That old familiar ache started in Chase’s belly and he cursed it away. He rode on until he came to the faded, bleached wood of the old ranch house. It was derelict now, long abandoned. Chase had spent many happy hours here as a child and since—it was his get-away.

The horse threw back his head and snorted. Something was there. Fireblade was never wrong, and this time it was more than an inquisitive rattlesnake, Chase could tell. He eased himself smoothly off the stallion and drew his revolver.

Chase took slow and steady steps towards the old house, every sense alert to danger. He edged around the corner, his Colt .45 primed before him. Nothing.

The sense of danger was familiar and exhilarating. He continued, peering through the broken windows of the old house, and turned the far corner. Whatever was there was eluding him skilfully. He let out a curse before backing up to try the other way.

Before he took another step he heard the ominous click of a revolver being cocked right behind him. He froze, his heart plummeting from his chest.

Chase’s blood seemed to turn to ice in his veins. He knew better than to argue with that voice, that low voice that ran like treacle. He could see the steel-gray metal of a Smith & Wesson out of the corner of his eye. Chase drew his hands up slowly, releasing his hold on the trigger and giving no resistance.

“You’re trespassin’, Riff. You know better than to try that on my land.”

“Your land? An’ here I was thinkin’ it was fair game these days.”

“You got a mouth on you, you bastard.”

“You should know, farm boy.”

Slowly, Chase turned and looked at the familiar face of Riff Felton, his old cowboy, the best he’d ever known, and the man who had been his friend, his best friend. Not anymore. Riff had gone, he thought. Gone to live his own life, forge his own dreams. Riff had taken Blue Ridge, and ol’ Joshua Truman would never forgive him. Once a part of Redhorn, always a part of Redhorn. Riff had broken that.

Share what you thought about Dust and Desire and earn reward points.