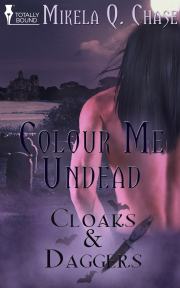 When Cora's cousin asks her to plan a wedding for the undead she doesn't expect to fall in love with the vampire king.

As a favour to her cousin, Cora agrees to help plan her undead wedding. Little does she realise that Basil Bloodthorn, the vampire king, has plans of his own.

When Basil catches sight of Cora he knows he's found his mate. Unfortunately not everyone agrees with that decision, and Cora's life is endangered when someone else decides she'd rather be the next vampire queen and Cora is an obstacle that needs to be removed.

Cora was going to kill her cousin. It wasn’t a big problem—few people would miss her, and as one of the undead, odds were good she would rise again. Still grumbling to herself, Cora pulled up in front of the spooky castle. Taking a deep breath, she tried to ignore the chills dancing up and down her spine and the goose bumps popping up across her flesh.

She couldn’t believe she let herself be talked into this, organising a wedding for an undead bride and groom. If she thought suicide would get her out of this she would willingly jump off a bridge. Unfortunately, her aunt—the voodoo queen—would then calmly bring her back to life and hand over her wedding planner.

Some days she hated her family. Today looked to be one of those days.

Sitting in her car, she stared at the forbidding castle. Gloomy grey brick—check. Gargoyles grinning down in a macabre manner—check. Lightning storm beginning...

Yep, it was like she was on a movie set. She could hear the director now. “Take one of ‘Scare the Crap out of Cora’.”

Shaking her head at her silliness, Cora snagged her pink laptop case and opened the door of her lemon yellow Volkswagen Beetle. She climbed out and slammed the door behind her. If she didn’t use enough force the door didn’t always close completely. It was an old car and even with a full restoration it still had its quirks. The sound echoed in the unnaturally quiet courtyard, rattling her already shaky nerves.

Cora didn’t know why she was so nervous. No one would harm her. Her cousin was marrying the second-in-line for the vampire throne. If anyone touched Cora, Melinda would rip off their head and show it to them. Still, that didn’t mean someone wouldn’t try something. She almost wished she’d taken the stake that her assistant, Becka, offered earlier. The perky blonde had popped into Cora’s office minutes before she had to leave and plunked down a suitcase full of anti-vampire paraphernalia. Her friend meant well and right about now Cora was yearning for those night vision goggles, but she didn’t think it showed good faith to come to a meeting equipped to kill your customer...even if they were family. Not that she planned on becoming known as the undead wedding planner, but money was money and the amount of cash her cousin promised her would more than finish paying off her mortgage.

“Are you going to stand here all night or do you plan on coming in?”

Mikela Chase also writes under the name of Amber Kell. She enjoys playing with her two boys, spending time with her husband and avoiding housework of all types.

Colour Me Undead is fast-paced and wonderfully fun.  Mikela Q. Chase starts things off on a high note with a sassy heroine who’s not afraid to take her powerful hero down a peg or two.  Basil and C...

The story flowed seamlessly and didn't seem forced in any way; the characters' chemistry felt real and the characters themselves are fully developed. This is a short story but don't let...

Share what you thought about Colour Me Undead and earn reward points.