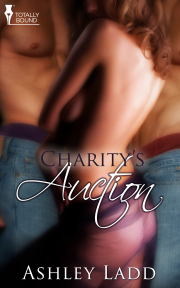 When Char bids on and wins both sexy doctors Hunky and Hottie in her hospital's charity auction, she knows exactly what to do with them and it's not tidily winks.

Although head nurse Char Reynolds is desperately head over heels for bad boy Dr. Dexter Graham, he's moved on. Still she gets caught up in bidding for him at the hospital's auction for the new children's wing and wins. His smug expression drives her to also bid on and win the very hunky Dr. Ben Price, Dexter's nemesis and to plan a very naughty, very sexy night with both men.

Share what you thought about Charity's Auction AUDIO and earn reward points.