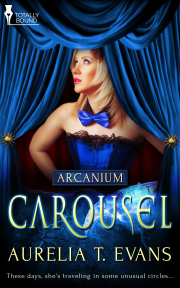 Book 2 in the Arcanium series

These days, she’s traveling in some unusual circles…

Before her father can kick her out of the house, Caroline runs away to join the circus. She’s far from the oddity or performer that Arcanium is known for, but the fortune teller grants her wish to become a part of his circus and assigns her to run the carousel.

It’s repetitive work and the quarters are cramped, but it’s the perfect job while Caroline figures out what the hell she’s going to do with her life.

Then some of the creepy carousel mounts—the ones that look like tormented human men—start coming to life at night. At first she thinks they’re just dreams, but she quickly discovers that Arcanium is no ordinary circus.

Caroline must not only come to grips with the shady motivations and affections of her new colleagues, but also with the driven desire inside her for Riley and Colm—the men bound to the carousel to atone for their sins, who beg her to save them.

Reader Advisory: This book contains horror-related gore and violence, a scene of miscommunication where sexual assault almost occurs, but all sex scenes within Arcanium are consensual. Includes MF and MFM sex scenes and multiple partners. Warnings for demon clown sex (it’s just as weird but hotter than you think— avoid if coulrophobic), sex with well-endowed demons, and voyeurism.

By the time Caroline reached the spiked, scrolled iron gate of the circus Arcanium on its last day in town, she was pretty sure she hadn’t thought her brilliant plan through.

Now that she was here, it all seemed so silly, the stuff a little kid’s threats were made of.

‘Fine. Then I’ll just run away and join the circus!’

She hadn’t been serious when she’d said it, but last night it had occurred to her… Why not? And this morning, it had seemed the logical decision. What could she say? The job market was crap.

And didn’t everyone have a secret wish to join the circus? The circus was magical, fantastic, beautiful, risky, rife with nomadic instability. Her father was all about stability. Stability, responsibility, accountability…a lot of abilities.

She was twenty years old, for Pete’s sake. Shouldn’t she have a little spontaneity before life sucked it all out with a crazy straw? Well, her dad seemed intent on ensuring said suck. He wasn’t being unreasonable, of course. On the contrary, he was being eminently reasonable.

It wasn’t that she hadn’t wanted a job this summer. It was the damn economy. She hadn’t been able to find a summer job to save her life. She’d written up over seventy-five applications and done fifteen interviews, and she’d come home every evening with nary a paycheck to show for it.

She’d tried offering her services as a babysitter to people in her apartment complex. That had gotten her a few gigs. Literally, a few. No one needed a babysitter with any kind of regularity, and most of them didn’t want a twenty year old. They wanted a teenager. It was the classic dilemma. Too young for a proper job, especially since she was going back to school in the fall. Too old for babysitting. And the part-time jobs had already been taken by the time she’d got home from college for the summer break.

According to her father, this was all her fault. Caroline didn’t quite understand why. She was burning gasoline looking for a job. She didn’t have any weird affectations like visible tattoos or piercings or colored hair. She didn’t think she stank. Yet she couldn’t seem to find anything in her suburban city, despite the fact it hadn’t been hit too hard by the downturn. To say she was discouraged was an oversimplification.

But her father didn’t just fail to understand why she couldn’t find a job. He refused to accept it.

‘Damn it, Caroline. I’m not going to have you stay under my roof and do whatever you want while you’re of able body and mind to work. I was working at sixteen and throughout college. I had to get loans and pay them off by my own sweat and blood. What are you doing when you go out? Catching a movie and getting a latte?’

Well, okay, once. But only because she’d gone on the movie theater circuit filling out applications.

‘Thank you for your interest. We’ll call you in a few days.’

She hated that response. They never called. She wished they’d just say no before she filled out an application. Or hell, they could say no after she filled out the application. The worst part wasn’t the rejection. It was the false hope every time the cowardly bastards said they’d call.

Maybe she should dye her hair some wacky color or get her septum pierced. Maybe the people hiring would at least remember her face.

In that case, though, Caroline thought her father wouldn’t just threaten to kick her out of the house and refuse to pay tuition—both which he’d been increasingly threatening to do. If she made herself ‘unmarketable’ like that, Caroline thought he’d actually do it.

So she’d beaten him to the punch. Or so she’d thought this morning, when running away and joining the circus had seemed like an awesome idea.

After paying the twenty-dollar cover charge, she passed through the gate to join the other visitors of Arcanium. Her duffel bag, which carried all her important worldly possessions, weighed on her shoulder. She was a small girl. Things she’d packed that had seemed essential a few hours ago were now unnecessary burdens. But what was she supposed to do? Go back home?

Everything looked much as it had last week when Grace, Lana and Caroline had walked past it on the way to the coffee shop. Sure, they could have driven, but the walk from their neighborhood past the wooded area and the empty fields was peaceful, and Grace had wanted to earn her empty calories. Besides, the longer they could make their coffee run, the longer Caroline could avoid home—and avoid those shaming glances telling her that having fun with her friends was just one more reason why she wasn’t employed—even though she checked for ‘hiring’ signs at the other stores around Starbucks every time she was there.

Caroline didn’t remember her dad being this much of a buzzkill when she was younger. He’d always been strict and exacting, but Caroline had had just about enough of blame. She wanted a job. She couldn’t stand another moment of feeling like a failure. Had a little bit of sympathy been too much to ask for? He knew she wasn’t lazy. He knew she went out every day except Sundays to look for a job. He knew she was a conscientious student and far from a troublemaker. Or at least, she’d thought he knew that.

Her father had made it abundantly clear she didn’t belong at home anymore. But for some reason, this morning she’d thought she belonged in the same place as the strange people she now stared at from under the canopies of their exhibition tents. ‘Oddity Row’, the signs called it.

Of course, now she realized the flaw in her fool-proof plan.

The more oddities she passed, the more she was convinced how appropriate it was that she’d been born a natural blonde. Her stupidity weighed on her with each step.

There was the woman who seemed lovely enough as she knitted, with beautiful, flowing chestnut hair that draped over her shoulders past her waist. Then Caroline noticed that the woman also had a full, long, chestnut beard pulled into a tail by a string of leather dangling with beads. The woman also had a few inches of thick but soft-looking chestnut hair over her arms, legs and the exposed part of her chest above the bodice of her dress.

Next, a man with smooth, oiled skin balanced a piano on his shoulders like Atlas holding the globe. His muscles bulged, vascular though not overly large like one might expect from a strongman. His dark gaze fell upon her as she passed by.

She imagined those muscles flexing during…other activities and shivered. She bit her lip at the way her thighs rubbed together as she continued down the line. Most of her friends preferred a sleeker form, but she’d always had a secret thing for beefcake.

In the next tent, a woman draped over a settee that had, in turn, been draped with giant serpents. Caroline hated snakes and didn’t linger, no matter how stunning the snake charmer was.

Rushing along, Caroline passed by a trio of steampunk harlequin clowns performing for a small crowd that stood around a wooden makeshift ring.

She actually jumped back when she noticed one of the clowns didn’t have the typical, overly affected makeup like the other two—one of the men happy and the single woman sad. This man’s face paint made his mouth look stretched from ear to ear and past the line of his chin, filled with a jagged, cramped cluster of pointed teeth made for ripping throats out. The artistry was so advanced that Caroline had to change angles to realize it was just paint. This man also wore rainbow suspenders, which Caroline was pretty sure wasn’t part of the typical harlequin design.

The trio danced around the ring like children to distant calliope music of unknown origin, juggling knives, handsaws and flaming torches, all things people generally didn’t want children tossing about. A burst of applause followed when the happy clown reached into the bag of tricks at his side and pulled out a handful of sausages to join the juggling fray. Each link ended up sliced in two by the tossed knives and cooking over the tossed torches before being offered to some of the audience members.

Caroline was impressed. She was also thoroughly creeped out.

She’d never been much afraid of clowns, but something about these three… Maybe because underneath their makeup, their mouths had no expression at all, lips pursed in an emotionless line.

Their yellow irises—contacts, obviously, to make them look reptilian or demonic—glowed with fervor in the blackened whites. They used their eyebrows liberally. The happy and sad clowns’ hair had been gelled into mohawks, and the monster-faced clown’s hair bushed out in two tufts on either side of his head. As well as it could, their hair whipped side to side with each exaggerated movement. But their lips remained still, depending on the paint alone to express a flat melodrama of emotion.

Caroline shifted her bag on her laden shoulder. A girl could only carry a giant duffel bag so far before giving out. She wasn’t a strongman—or strongwoman—after all.

Share what you thought about Carousel PRINT and earn reward points.

Other books in the Arcanium seriesView Series Page