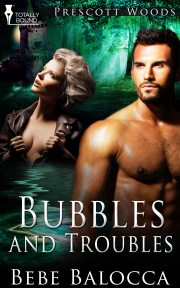 Book 1 in the Prescott Woods series

Prescott Woods is in trouble! A belly dancing lawyer, a stray cat of highly questionable origin, and a particularly malodorous gnome come to the rescue.

Carmen loves living in Charade, Kentucky. The quirky Appalachian village is everything that Chicago wasn't. Populated by modern day New Agers, Charade is like Mayberry with tie-dyed shirts, organic food, and incense thrown in for flavour.

When Calvin Prescott makes plans to sell his land to a high-end property developer, Carmen fears that the town she calls home will be changed forever. A new neighbourhood of multi-million dollar mansions would spell disaster for Charade's simple, small town charm.

Brock and his family moved to Prescott Woods over two hundred years ago. Like the other magical beings of the woods, they are immortal and imbued with special powers. Destruction of Prescott Woods would mean more than a change of pace for Brock and his kind—it would mean death. Brock can take on the appearance of anything—including animals of all sizes and shapes—in order to get closer to Carmen and save his home.

As Carmen learns more of the secrets of Prescott Woods, she finds that Brock is irresistibly strokeable, regardless of his appearance. She also uncovers danger, family drama, and the most luxuriant subterranean spa she can imagine.

He was tall, lean, and corded with muscle. He slipped through the shadows like mist. Carmen chased him, frustrated, and called out. He’d disappeared into the rustling leaves, and she felt utterly bereft. Would she never feel his touch again?

She whimpered in the silence of the woods, lonely and cold. He was gone, and she was alone.

Then he was at her back once more, solid and warm, towering over her. Carmen leaned into him, overwhelmed with relief and longing.

"You’re back," she breathed. "You came back for me. I hoped so much that you would."

He cupped her breast with his right hand and slid his other down her belly. The skin of her abdomen warmed and moulded to the shape of his fingers and palm.

His erection pressed into the small of her back and he moved his left hand lower, yanking down her skirt and panties. Carmen’s breaths quickened. She reached behind her and drew him closer, gripping the clenched cheeks of his bare ass with her hand. "Yes," she whispered.

He stroked between her legs, teasing the edges of her pussy lips with the lightest of touches, before sliding his fingers inside. Carmen arched against him and felt wetness flow from her cunt over his knuckles. She writhed in his embrace, twisting her spine so that his hardened shaft ground against her lower back. He shoved his fingers deep within her, stretching her, and Carmen spread her thighs wide. She covered the hand that fucked her with her own, urging him to push deeper and faster.

Abruptly, he forced her to her knees on the woodland floor. Carmen caught herself with her hands and gasped to feel the tip of his cock nudging the entrance to her pussy. She lowered her weight onto her elbows and thrust her ass high into the air.

He entered her with one aggressive stroke. His shaft, impossibly thick and long, seemed too big for her, but her dripping wetness eased the snug entry. "Fuck, yes," Carmen whispered. She feared that she might split into pieces, skewered by that magnificent organ of his. It was a delicious, searing, perfect pain.

She flattened her chest on the ground, bending in two. The dry leaves rustled beneath her, delicate and feathery on her sensitive nipples, as his thrusts shook her entire body.

Then he shoved it all in, fucking her furiously, and came with a roar. She fell into her own shuddering, raging climax. The walls of her pussy contracted in rhythmic spasms, matching beat-for-beat the spurts of thick fluid that gushed from his shaft.

Carmen bucked against him, drawing out her orgasm, and scraped her tits on the leaf-strewn forest floor.

Carmen exhaled and pulled her slickened fingers from between her legs. Cool grey light flooded the room.

Once more, that huge stray cat was sitting outside her window on the ledge, staring in.

The fluffy grey cat meowed, brilliant blue eyes flashing, and leapt away. Carmen made a mental note to buy some cat food at the store and try to convince the big tom to stick around. Recently, she’d noticed signs of mice in the chicken coop—she could use a good mouser.

Life on Carmen’s little farm meant rising at the crack of dawn, but she loved every day of her life in the eastern Kentucky country. She stretched with a satisfied groan and then used a tissue to wipe off her sticky fingers.

"Come on, girls! Breakfast time!" Carmen opened the door to the henhouse and scattered scratch feed over the ground. Agatha, the dove-grey Silkie, and Bella, the black-and-white speckled Andalusian, trotted over and began pecking away. Scarlett and Melanie, the fluffy, fancy Faverolles, stuck close together and approached cautiously. The other birds sometimes bullied them. Carmen thought they must be jealous since Scarlett and Melanie were by far the prettiest chickens in the flock.

Gretel, the robust black Jersey Giant, sidled up next to Carmen. Gretel was as friendly as she was hefty. Suellen, the orange New Hampshire Red, worked her way in between Agatha and Bella. Spare Tire, the Bantam rooster, hopped down from his favourite black rubber perch and strutted around his girls. Carmen’s mellow golden Labrador, Dax, exited his doghouse and sat by Carmen’s feet with a proprietary air. He and Spare Tire had an uneasy truce. Both felt it was their job to protect the girls—the chickens and Carmen—and Carmen had made it clear that peace between her boys was the only option. Dax locked eyes with Spare Tire and huffed, then trotted back to his doghouse to observe the scene from the comfort of his cedar chip bed.

Rewind it all five years and Carmen would never have imagined that she’d be living here in this old cabin next to the woods, with six chickens, a rooster, and a big yellow dog as her foster children. Not to mention working at an organic vegetable co-op. Oh, and belly dancing. I’m a regular hippie, she chuckled to herself. City-boy Ian would be totally appalled.

Share what you thought about Bubbles and Troubles and earn reward points.

Other books in the Prescott Woods seriesView Series Page