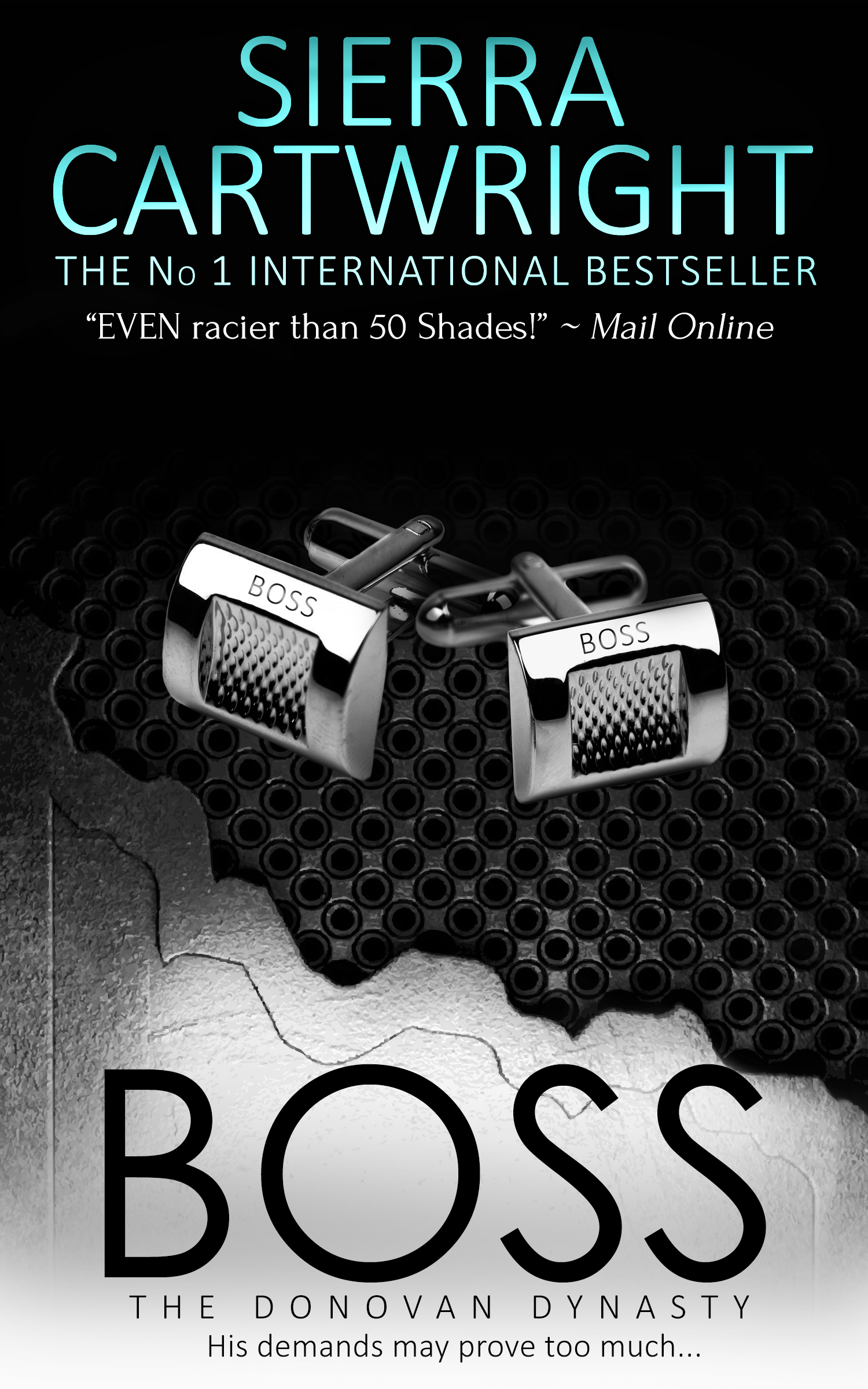 Book 3 in the The Donovan Dynasty series

When the fearless, larger-than-life Nathan Donovan becomes her boss, Kelsey Lane’s life is turned upside down. The multimillionaire wants her by his side, but his demands don’t end there.

Kelsey avoids romantic entanglements, especially with overwhelmingly dynamic men like Nathan. But she quickly discovers his attention and sensual desires ignite something deep inside her, leading her on a journey that tests everything she believes.

The youngest, boldest of the dynamic Donovan brothers, Nathan is accustomed to getting what he wants. And he focuses his attention on the smart, sexy Kelsey Lane. He quickly discovers she’s unlike any woman he’s ever known.

She meets him, desire for desire, getting deep inside him, destroying the barriers he keeps around his heart. He wonders, though, if she’s willing to give him the one thing he demands…

“Is that Kelsey Lane?”

Startled, Nathan Donovan glanced up from his phone screen and looked over at his older brother, Connor. “Yeah. I just got her file.”

“On a Saturday night?” Connor raised his eyebrows. “At Grandfather’s centennial celebration? Better not let him see you working.”

Nathan had snuck off to a corner of the big fucking tent where he’d hoped he wouldn’t be disturbed. Since there were nearly a thousand guests in attendance, he should have known better than to think he could work instead of socializing and not get caught.

“Anything interesting?” Connor asked, after a glance around.

Realizing his brother wasn’t going away, Nathan turned off the screen and dropped the phone back into his pocket. “She has a master’s degree. Been with Newman Inland Marine around six years, including internships. Loyal. Trusted. Exemplary record. Promotions faster than expected.”

Connor nodded, as if the information wasn’t a surprise.

“What do you know about her?” Nathan asked.

“Not much. Her name crossed my desk a couple of days ago. A recruiter was searching talent for BHI.”

Connor’s wife owned BHI, and Connor had a seat on the board of directors. As CEO, Lara counted on Connor’s support and opinions. “Interesting,” Nathan said. As their businesses grew, these types of conflicts were inevitable. Unwelcome, but inevitable. He knew that BHI had interests in shipping and logistics, but since they were ground-and-air based, they were at best minor competition. “What capacity are we talking about here?”

“We don’t have to pursue her.”

Nathan refused to stand between her and success with another company. And if her skill set would benefit BHI, they deserved the chance to woo her. “You’re welcome to go after her.”

Connor no longer seemed to be listening, and Nathan followed his brother’s gaze. His wife Lara was talking to a tall cowboy who leaned toward her. Too close, if the sudden scowl on Connor’s face was anything to judge by.

“Excuse me,” Connor said, jaw set. Without waiting for a response, Connor strode toward his wife.

He took out his phone and returned to the information on Kelsey. Info? If he was honest with himself, he would admit he wasn’t only interested in her biography. He wanted to look at her picture.

Her smile appeared a bit forced, as if she were impatient with the photographer. Even that didn’t detract from the beauty of her hazel eyes, the fullness of her lips or the sight of her long, dark hair.

Everything about her appealed to him.

If the acquisition went through, the gorgeous Kelsey Lane would be his assistant.

That was incentive to work longer and harder.

A couple whose names he couldn’t remember stopped to chat. Hiding his annoyance, he put his phone away and shook the man’s hand.

It took a full five minutes before their attention wandered and they excused themselves.

He wondered how many more times he would be required to smile before making an escape. Unbelievably, people were still arriving. Some were even in limos, which was supremely impractical on a ranch, not just because of the dirt roads but also the distance from a major town.

Straddling the line between irritation and impatience, he glanced at his watch. Not that it was a watch, even though it told time with the accuracy of an atomic clock. The unit was more like a mini-computer. It never needed recharging since it was powered by his body’s movements. Barring that, light reenergized it. The Julien Bonds-created masterpiece wasn’t just intuitive, it often anticipated Nathan’s actions.

The unit vibrated. In response, he swiped his finger across the sapphire-glass surface. A tiny hologram of his sister-in-law Sofia appeared. Beneath her, in script that advanced forward as he read each word, Sofia said, “It’s not yet eight o’clock, Nathan. You’re expected to stay at least two more hours. As a reminder, please ask your mother to dance. And oh, Connor just told me to lock you out of the Wi-Fi until eleven p.m., even at the guest house, so even if you run away, you won’t be able to get online. He says it’s for your own good.”

What the fuck? He went to swipe away the image, but she started speaking again. “You might as well relax, have something to drink and enjoy yourself. Bye-bye!” With a cheery little annoying wave, her image vanished.

Everyone apparently knew he’d rather be anywhere but here. Fucking parties. Waste of time. Even bigger waste of money.

He ran his finger along the inside of his shirt collar. Even though it was October, it was hotter than hell at the family’s Running Wind Ranch in South Texas.

If it had been his choice, he’d have stayed in Houston to work on the Newman Inland Marine deal. It was getting close to crunch time. He was sleeping fewer and fewer hours, fueled by the challenges and opportunities. It was heady stuff. To him, it was like a drug. And he was all but shaking with the need for his fix.

As if on cue to save him, a server passed by, bearing a variety of wines all from locally grown grapes.

“Don’t mind if I do.” He snagged a glass of something red.

“Glad we didn’t burn the ranch house down?”

“Stop it, you cheapskate. This is fun.”

“Fun?” Maybe to some people it was.

Even he had to admit that, despite the exorbitant cost. He’d secretly scoffed at her idea of erecting tents on the grounds. He’d even wondered aloud if the whole thing were a circus.

But the inside didn’t resemble a tent. The thing was massive, had windows, tables, a dance floor, French doors and, blessedly, air conditioning. She’d even managed to get the Matthew Martin band to interrupt a nationwide tour to provide entertainment. It was world-class, from covers to their own top-ten hits, ballads to country swing, and they’d even managed a few obligatory line dances. Not bad for a band that had won country music’s most prestigious award three out of the last five years.

“Granddaddy says this will be good for business.”

“Not sure how that’s possible when we’re locked out of the Wi-Fi.”

“For Christ’s sake, Nathan. You won’t die without your phone. Have you always been such a bore? I used to enjoy hanging out with you.” She frowned. “At least I think I did. Maybe my mind is playing tricks on me.”

Sometime during the evening, she’d ditched her shoes. Her hair was piled on top of her head and she’d woven some small white flowers through the strands.

She’d chosen an interesting outfit, a short leather skirt and a black corset. Of course. “Dressed to spite me?”

“Please.” She rolled her eyes. “Get it through your thick skull. Not everything is about you.”

This was an old argument. He and Erin saw financials differently. She insisted he was overly cautious, to the point of being out of step and stuffy. He didn’t mind the accusation. When his father had died, Connor had inherited a company headed toward disaster. Nathan had seen how close the Donovans were to losing the hard-fought legacy that had been handed down through the generations. When he’d been appointed CFO, he’d vowed to be a good steward so that future Donovans would have something to be proud of.

Erin preferred to live for the moment, determined to do what good she could for the world. She was a dreamer. He was a planner. And when she’d approached him to invest in her friend’s corset store, he’d refused.

Undaunted, she’d used money from her own trust fund to help her friend.

“So, do you like it?” she asked, interrupting his musings.

“Helping visibility of the shop by showing how versatile the piece is. It can be worn anywhere, even a fancy event. Corsets are not just for the bedroom.”

“And the necklace…? Are you also modeling it?”

“Oh, this?” She touched the exquisite—and if he didn’t miss his guess, fucking expensive—teardrop pendant. “No. This was retail therapy.”

“Was there a reason you dropped money on an extravagant piece of jewelry?” She’d inherited a treasure trove full of stuff from their great-grandmother. Surely she could have just reset some of those stones.

“I bought it right after Connor’s wedding reception,” she answered vaguely.

Before he could ask anything else, she took a sip of wine. “This is good,” she said approvingly before taking a second, longer drink. “So, why didn’t you bring a date? That would have helped.”

He regarded her. “To this command performance?”

She shrugged. “I know what you mean.”

Since all of the family members had arrived Friday and planned to stay until Sunday, he’d nixed the idea of bringing a woman he barely knew to meet the family, endure endless questions and share his space.

I loved this latest story in the Donovan Dynasty series.

I enjoyed watching Kelsey and Nathan’s relationship take shape. Seeing their attraction turn into something deeper made for a great...

Share what you thought about Boss and earn reward points.

Sierra Cartwright now has her own microsite for The Donovan Dynasty series. Check it out to find out more about this acclaimed series!

Other books in the The Donovan Dynasty seriesView Series Page