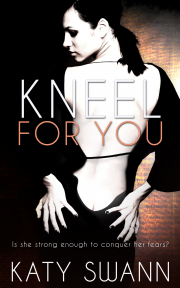 Should she agree to be spanked? Just the once? It would all be in the name of research, of course…

Returning to the club and watching the scenes around them reminds Kirsten what she’s missing. She’s envious of the girl being flogged by her Dom nearby, but she’s so busy denying it that she doesn’t recognize the burning need inside her. Until she spots Eddie—a colleague she’s got a secret crush on—working in the club as a Dungeon Monitor.

Eddie reintroduces her to the joys of Dominance and submission, the delicious sting of a spanking and the incredible sex that follows. But is she strong enough to conquer her fears?

Publisher's Note: This book was previously released as part of the Over the Knee anthology by Totally Bound Publishing.

“No, Kirsten, I need you to work on something special for me.”

I glared at my boss in irritation as she cut me off mid-sentence. Okay, as Editor-in-Chief, Tina’s time might be worth more than its weight in gold, but she could at least have heard me out. We were sitting around the large oval table in the boardroom, as we did every Thursday for the editorial meeting, and I’d just begun to pitch my brilliant idea for my next feature. She gave me a hard look over the top of her glasses that clearly said ‘shut up and listen’.

I swallowed my angry retort, acutely aware of the interested stares now directed at me from my colleagues around the table. Okay, maybe now wasn’t the time to argue my case, so I tried my best to smooth away the frown I knew would be giving away how pissed off I was, and waited for Tina to continue.

Tina rolled her eyes in exasperation. “Well, do your research, then,” she snapped, giving me the look she usually reserved for idiots.

Eddie, who I’d secretly had a crush on since he’d started six months ago, gave me a sympathetic smile across the table while Britney, from the beauty section, smirked. Bitch.

The rest of the meeting passed in a blur as I struggled with a combination of memories and panic. I briefly considered telling Tina that I absolutely refused to do it, but if I did that I might as well clear out my desk before the meeting was even over. And I didn’t want anyone asking questions about my kinky past. That chapter of my life was permanently sealed tight with superglue. So I had no choice but to grit my teeth, act clueless and write a convincing piece about the joys of kink. And I only had a bloody week.

When the meeting was finally over I glanced across at Chloe as we rose from the table. She’d become a good friend since she’d started at the magazine just over a year ago and we often bounced ideas off each other. She saw the hidden message in my face and nodded. She’d know what to do. Although she wasn’t aware of my past, she’d once admitted over a few drinks that she had occasionally dabbled in BDSM with her ex-boyfriend and had even been to a couple of fetish clubs. Should I tell her about what had happened three years ago? But that would mean raking up painful memories that I’d tried so hard to bury. No, it was best not to say anything.

As I headed back to my desk my phone bleeped and I quickly checked the text. It was from Chloe.

Meet me at two-thirty, usual place.

This is a great little story. It’s intriguing and well-written, with likeable characters. I was eager to find out what happened next, whether Kirsten would indeed conquer her fears. Overall, a boo...

Share what you thought about Kneel for You and earn reward points.

When I started plotting the story for my new book I was so full of ideas that I couldn’t get them down quickly enough. I had pages and pages of notes, knew exactly how the story would unfold and had a clear image of the characters in my head. I couldn’t wait to get started. At first everything was fine. The first few chapters almost wrote themselves and I quickly became drawn into the story. And then I hit a brick wall – writer’s block.