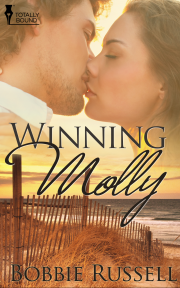 A one night stand with a beautiful, mysterious stranger should have been enough, but soon Win's involved in a race against the clock to prevent a murder.

Her bike was parked in the sand by his beach house, but when Win Coulter catches up with Molly at the water's edge and accuses her of trespassing, she wants much more from him than the right to walk on the beach.

Win, a gentle computer wizard, is happy to comply with her request for hot wild sex, but he quickly becomes both lover and protector when Molly and her father are threatened.

Win dropped his computer case on the overstuffed chair in the living room as he made his way to the wide, sliding glass doors that opened onto his deck. His furniture was arranged so that nothing interfered with his beeline each day from the front door.

He took a deep breath, sucking in the clean ocean air like a starving man, and perhaps he was. The critical role his computer company played in national security was at times unbearably stressful, and the only saving grace in living on the east coast anywhere close to Washington DC was his beach house.

The entire east side was nothing but glass, and while he had drapes and blinds, they were rarely closed to the magnificent ocean view. The floor-to-ceiling glass partitions receded back into the side walls, and when he wanted, which was almost always, his house was totally open to the beach and ocean. His deck ran the length of the house with doors to both the living room and his bedroom. The bathroom and another room he used as an office sat at the front of the house, and his kitchen was to the right of the living room. The cottage was small but perfect for his needs.

He closed his eyes and let his senses soak in the smell of the salt in the air, the cries of the gulls and the lingering heat from the setting sun.

“Ouch, damn.” The soft expletive wafted across the distance on the breeze.

Win’s eyes popped open. His house sat on a solitary stretch of beach, the surf and undertow stronger than was safe for a public swimming area, which was fine with him. So who was invading his space?

A slender figure, her back to him, shook her hand as she walked away from a bicycle leaning against the section of picket fence that ran the length of his property towards the water. Another section of fence ran perpendicular to this, helping to keep the sand from blowing and supposedly acting as a barricade to keep people off his beach.

His eyes narrowed as he watched her weave around one fence and then walk along the other to the end. What happened to his damned no trespassing signs, he wondered as he yanked off his shoes and socks and took off after her. Legally, he supposed that anyone could walk this beach, for it stretched along the entire frigging east coast, but he still considered it private. At least the path, she had taken to get to the beach was private, and that would be his defence when he kicked her off.

“Hey!” he shouted as he stomped across the loose sand. The storm the other night had left the usually pristine sand littered with sticks and debris, and he tried to watch where he walked at the same time keeping her in sight. She paid him no mind, walking straight for the water.

“Shit, do not go in that water,” he mumbled, knowing she wouldn’t hear him even if he shouted. The breeze blew his words back at him. He could see it now. Some unsuspecting woman deciding to take a swim in the cool September water, getting dragged down in the undertow and he would have to go in and save her. He glanced down at his gabardine slacks with a sigh.

When he looked back up, she had stopped at the water’s edge, the waves lapping at slender, bare ankles. Something about her demeanour made him stop and watch instead of approaching. She stood very still, looking neither right nor left but straight out to sea. She reached up and gathered her long brown hair in her hands, twisting it around and pulling it over one shoulder. Her other hand dropped back to her side.

Win had always appreciated the female form, and even though this woman had trespassed—well, sort of—he still admired her slender frame. The skirt she wore came to mid-calf, but with the wind, he caught a glimpse of the back of her knees and a little of her pale thighs. His mouth watered, thinking about kissing that sensitive area, and sliding his tongue up along the inside of her thigh to the very centre of her.

That was all it took for his cock to come to attention. He’d been so busy with the latest security endeavours there had been no time for a relationship. Lydia, his last girlfriend, had broken off with him six months ago for just that reason. The sex had been great, but truth be told, she was right. She deserved better. Still, he missed the sex.

He dropped his chin to his chest, shaking his head. Hell, he didn’t even know this woman’s name and he was thinking about sex? “Well, you never know unless you ask,” he muttered, stepping forward. “Excuse me?” he said as he approached, not wanting to scare her. She didn’t turn.

This sexy novel is a perfect book if you want to cozy up with something warm during the cold winter nights. Winning Molly is a great romance featuring a computer geek turned hero and a young woman in...

Share what you thought about Winning Molly and earn reward points.