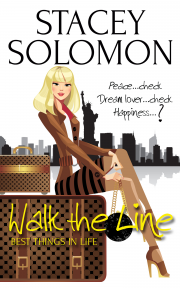 Book 2 in the Best Things in Life series

Blake Hudson is back, standing on Charlotte Taylor’s doorstep. After a wonderful reunion, a year soon zips by with Charlotte trotting all over the globe to develop her exciting career.

She begins to think about the future and where her relationship with Blake is going. They need a permanent base, a home they can call their own, but Blake doesn’t appear to agree, and once again they’re battling uncertainties with an ocean between them.

As if that isn’t enough to contend with, Blake’s sort-of-brother, Connor, is playing a mean game. He doesn’t trust Charlotte and has made it clear he doesn’t like her. He’s up to no good—and not just by trying to persuade Blake that he’s better off without Charlotte. With her detective head on, Charlotte plans to uncover Connor’s deceptions.

But the question is: Will Blake believe her when she discovers the truth, or will family loyalty get in the way?

A shock revelation involving Rupert, her gay best friend, helps Charlotte to take matters into her own hands, pull up her big girl panties, and fight for what she wants.

And what she wants is Blake Hudson.

I stared at Blake standing there on my doorstep, my vocal cords frozen, my heart thudding like no one’s business. Oh my word, if I wasn’t careful I’d faint from shock. Blinking didn’t make him go away, and usually, when I was dreaming, blinking was the way to go—it woke me up and I’d realise I’d been somewhere else other than reality. My daydreaming really did have a hold on me. But I wasn’t daydreaming. There he was, suitcase sitting on the ground beside him, his face expressing hope and fear and the expectation of rejection.

That was hardly what I’d planned to say if I saw him again, but it was all I could get out. My mind had gone AWOL on me, leaving me to fend for myself in the minefield I’d been thrust into.

Come back and rescue me, brain!

Aretha Franklin’s voice answered me instead, singing Rescue Me, and I struggled to make the earworm go away. Now was not a good time to start dancing to her fabulous song.

“Well?” he said, raising his eyebrows like he always did.

I’d missed that. Missed him.

Then I squealed in true Lola fashion, the enormity that he was really here hitting me suddenly. The certainty of the moment slapped me on both cheeks, and they flared hotly as I worked my mouth to stop another mad noise coming out. I was conscious of sounding like a deranged monkey.

I stepped back. He walked inside and dropped his suitcase on the floor. It made a clattering sound and scooted forward on its little wheels. It came to a stop in the middle of the hall, and I stared at it, still dumbfounded.

He closed the door, and all the while I held my breath, wanting him to ravish me senseless and erase the past month and more away. There was so much that needed to disappear—emotions, thoughts, my reasons for leaving him in New York. And there was so much to talk about. I’d had no preparation for this, and I was totally out on a limb.

My chest hurt—everything I felt for him had curled up into a ball there, tight and protected, a secret only I knew. If I could find the words to share my feelings I would, but his surreal manifestation had rendered me senseless and—

“Well…” I managed, that one word a choked whisper. “You’re…here.”

What a silly thing to say. Of course he was here, but perhaps I’d just needed to say it to make it real. The last message I’d got from Blake prior to him being here right now was ‘So, in answer to your question asking how much more time I need, I’m almost there, Herman. Listen, I have to go. I’ll let you know my answer soon.’

I’m almost there… I thought he’d meant that he was nearly at the point of finding his answer, which I hoped would be that he couldn’t be without me and we should start all over again, putting the past behind us. Oh… That would be delightful, all my Christmases rolled into one. A gigantic present, one I’d treasure for the rest of my life.

“Oh my goodness…” I backed into the wall, bumping my hip on the kitchen doorjamb. Ow. I might need the wall for support sometime in my immediate future if what he’d come to say was negative. If it was, could I slide down to the floor with grace if he told me to get lost and never darken his life again? Could a woman appear elegant, slumped in a heap in her pyjamas and terry-towelling dressing gown, crying her eyes out and begging for another chance? Was scrunched-up tissue ever a good look?

Er, no. Get a grip on yourself!

Now he was standing in my hallway, his presence filling the air and making me vibrate all over—it brought home to me how much I loved him. Yes, I’d missed him while we’d been apart—it had been an absolute nightmare, horrible—but conjuring his face in my head wasn’t the same as seeing it for real. Remembering how the atmosphere changed while he was around wasn’t the same as feeling it.

I need to pinch myself really hard.

“What’s…?” I’d been about to ask what his answer was but stopped myself. “You said,” I began again, my breathing going all skew-whiff, my pulse thudding hard in my throat. “You said you were almost there.”

“And I was. At the time of that message I was in a taxi.” He flexed his hands in and out of fists, keeping his arms at his sides as though fighting off the urge to lift them and pull me into a hug.

Or maybe I just wanted it to be that.

“I…” I fiddled with the front of my robe, crossing it more comfortably over my chest then clutching it at my neck with one hand. My subconscious at work? Creating a barrier over my heart so it was protected and wouldn’t get broken?

Oh, stop it with the dramatics and ask him what he’s going to do.

“What’s your answer?” I blurted.

He took a step closer, appearing bigger than he was, a giant version of himself that I could be pulled into a hug by, protected and soothed.

Don’t you give up on me now. Keep me upright, oh pins of mine.

“My answer…” He took another step closer. “Is that I…” Another step, so he was inches away from me. “Can’t live without you.”

A strangled sound popped out of my mouth, and I clamped my lips together. I knew it. He’d said he couldn’t live with me, and I could hardly blame him. I’d flown away from him without telling him the truth about me—that I was famous here—and left him to find out for himself. Oh, the reasons for me doing that had been valid to me at the time, they’d made perfect sense, but I should have stayed, told him to his face, and watched the dice fall where they had a mind.

“You don’t look too happy about that,” he said.

A frown streaked across his forehead. I hated that it was there—that once again I’d put one there. I searched my mind for something funny to say to make that frown disappear but all that floated through my head was Aretha doing her thang.

He lifted a hand to rub at his brow. “Have you changed your mind about us? Has being apart given you a different perspective?”

His body heat seemed to shimmer between us, and warmth spread up my chest to my neck, flouncing up past the tight lock of my dressing gown to splash all over my face. He really was right there, all manly and beautiful, his lips there for the taking if I had the courage to lean forward a bit and press mine to them.

To feel his mouth on mine would be Heaven.

Kiss him. Go on, kiss him until you can’t breathe.

The multi-talented Stacey Solomon was the X-Factor 2009’s last standing female contestant after coming third in the show.

In late 2010, she entered ITV’s I’m a Celebrity Get Me Out of Here and was crowned Queen of the Jungle. She was also voted Mum of the Year in 2011 and is currently the face of Look Again.

2015 saw Stacey release her first fiction novel, a new single and her own perfume.

Check out the series website for Best Things in Life here

Share what you thought about Walk the Line PRINT and earn reward points.

Other books in the Best Things in Life seriesView Series Page