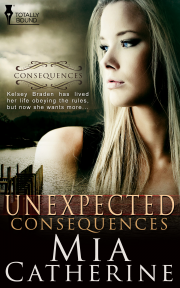 Book 1 in the Consequences series

While working to recruit his former best friend to join sides with a notorious mob boss, Nick Jensen unknowingly falls in love with his best friend's sister.

Kelsey Braden has lived her life obeying the rules, but now that she's back in her hometown of Brookfield after accepting her dream job, she wants more. Stuck in her protective shell and desperately wanting a way out, she finally decides to be spontaneous and acts on impulse.

Nick Jensen has lived a life full of challenges and pain. An intimidating loner, his history of mistakes and bad choices have alienated those once close to him. Now he finds himself working for the wrong people, and struggling with his current assignment—betraying his former best friend.

When Kelsey finds out the hot stranger she's fallen for is not only working for a well-known gangster, but that his target is her brother, she vows to cut him from her life. Unfortunately, the powerful men Nick is involved with have discovered the connection Kelsey has with both Nick and her brother, and decide to use her as an insurance policy. Nick has to find a way to save his new love, protect her brother, and prevent Kelsey from hating him, all while battling demons of his own.

"I expect you to stay in touch, Jensen. I don’t give a fuck if you did get to town a day early. Don’t get distracted by whatever whore you’ve got in your bed," the person with the gravelly voice ordered, over the phone.

"Oh, yeah?" Nick snapped. "Well, I got news for you, asshole. I’m on my time, not yours. The clock starts at noon tomorrow. Until then, lay off."

A reply of curse words followed, but he couldn’t have cared less. Nick disconnected the call and climbed off his Harley. It was time to relax.

Loud music, the clack of pool balls, and the smell of stale cigarette smoke greeted him when the door squealed open. Having been unexpectedly dragged back to Brookfield, Nick desperately needed to release some of his pent-up energy. The Rusty Spoke was the perfect place to hustle some pool and throw back a few beers. It was just as he remembered it from the old days—sticky floors, broken mirrors and burned out neon. Short of spending the night with a hot woman, it was exactly what he needed.

He set his coins on the pool table, indicating his challenge to the winner of the current game. He’d barely had a chance to hang up his jacket and order a beer before his turn arrived. As his opponent sized him up, Nick gave a terse grin. Candy from a baby, dude. Bring it.

Even at six foot one, Nick wasn’t what many would consider a physically intimidating man. Genetics assured his body remained lean, despite his efforts to bulk up, but his dedication in the gym kept his shoulders broad and his muscles well defined. He had learnt early on that respect was to be gained from fear, and he enjoyed putting that fear into any man who dared cross him. It was a trait that came in handy when dealing with a sore loser.

An unwavering pool shark, he handily beat his first challenger and a couple more before he even had a chance to order another beer. He wasn’t sure if it was his skill at the game, or the way he managed to unnerve his opponent that made him unbeatable, but he was cocky enough to think that, regardless, no one here could best him.

"Wanna take me on?" a pretty blonde asked, tilting her head to the side and giving him a sexy smile.

"Well, that depends," Nick replied as he drank in the sight of her. She was much too classy to be a hooker, at least compared to the hookers he’d known. If anything, she seemed too innocent to be in a shitty place like this. Still, if she was selling, he might have to reconsider his rule of never paying for sex. A fine young thing like her didn’t cross his path on a regular basis.

He took his time as he looked her over. Her tits were full, yet pert, and he could only imagine how sweet she’d taste, if given the opportunity. Her skin was flawless, her cheeks had just the right hint of pink, and her perfectly plump lips rounded in the most enticing little pout. She was beautiful, and sexy as hell, but what caught his attention most was the incredible depth in her clear blue eyes. They sparkled, even in the dimly lit bar. She could’ve had her pick of anyone in the joint, not that she even belonged there in the first place, but here she was, hitting on him.

"On what you mean by take you on."

"Well, how about we start with a game of pool? You up for it?" She walked past him, closer than necessary, and reached for a pool cue from the rack on the wall. The faint fragrance of lilacs trailed behind her. He couldn’t tell if it was her perfume or shampoo, but as soon as it dissipated, he wanted to close in to figure it out.

He watched the way her skirt hugged her curves. Her ass was every man’s dream. "Baby, I’m up for whatever you’re offering. What are the stakes?"

"How about loser buys dinner?"

"Works for me." He was tempted to throw the game if it meant taking her somewhere private and getting to know her better, but he had to keep his cool. "Wanna break?"

"Winner’s table. She’s all yours."

He did his best to concentrate on his task as he chalked up his cue. His ultimate goal was getting her somewhere alone, or, better yet, in his bed, but his pride was at stake. He couldn’t allow himself to look like a fool by losing to her. With one fast swipe of his cue, the smack of the pool balls rang through the bar.

Nick sank two more balls in quick succession, trying his best to balance skill with brevity. When he circled the table for his next shot, he caught sight of what was happening on the other side of the table, and his hopes for the evening began to fade.

A young dark-haired man was now sitting beside his beautiful opponent, showing obvious interest. He was exactly the all-American type he’d expect a beauty like her to go for. Well, so much for that.

Trying to keep his attention on the game, he rounded the corner for his next shot. The distraction caused him to miss, but he could now hear what the two were saying.

"Can I buy you a drink?" the intruder asked her.

"No thanks, I’m fine," she curtly responded.

"Oh, come on. Give a guy a chance. I know how to please a woman." He gave her a smile he’d no doubt perfected on many unsuspecting girls.

"Then please leave me alone." Although talking to the young man, her attention never veered from Nick, and his hopes for the evening renewed.

The intruder continued, clearly not giving up. "I think you want me."

She turned and looked him dead in the eye. "Oh, you’re so right. I want you to leave!"

Nick admired her feistiness and waited for the young punk to walk away with his tail between his legs. When it was clear that wasn’t going to happen, he intervened.

"Is there a problem here?" Nick asked the intruder.

"No, no problem, buddy. I was just talking to the lady."

Nick’s gaze left the punk and moved to her. "It’s your shot."

"Oh, great, it’s time to earn my dinner!" She smiled at Nick and walked towards the table.

Nick turned back to the punk. "Looks like the lady isn’t interested in anything you have to say." He then leaned closer and, with his practised grizzly voice and gritted teeth, snarled, "Buddy."

He chuckled when he saw the intruder lean back and avert his gaze. It was a sign of fear Nick had come to enjoy in unsuspecting assholes such as him. Without another word, the punk slunk away. "Smart boy," he muttered to himself.

Nick returned his attention to the pool table, where he found the beauty lining up her shot. The vision made blood rush towards his growing erection and he had to adjust his stance to allow room in his jeans. Damn, but she’s sexy. 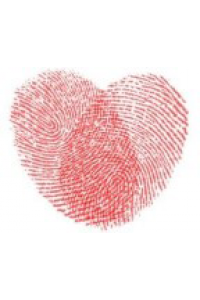 Born and raised in Wisconsin, Mia Catherine is a proud Cheesehead living with her husband and their three young sons. An avid fan of television dramas, Mia looked away from the small screen when she became disillusioned with the lack of substance on current shows. Enjoying the fantasy involved in a good love story, she turned to reading and quickly discovered a little voice in her head. That voice led to writing her first chapter, and the second, and the third…

Now, translating that voice in her head to words on the computer is Mia's escape when times get tough. As words begin to form a story, she's allowed to escape the trials of everyday life and live in her own little world, if for only a short time.

Knowing others find some pleasure reading what she's written is just an added bonus.

Enjoyable from the lust-filled beginning to the pulse-pounding dramatic conclusion, Unexpected Consequences is a thoroughly satisfying read and a great start to a new series.

Share what you thought about Unexpected Consequences and earn reward points.

What is your writing process?

I wish I could say I had a set process. Inspiration comes in strange ways, but in my hectic life, I grab it where I can. When I sit down to write, I try to lose myself in the characters. What would he say? What would he do?  I don't plot my stories, they just seem to come organically—sometimes from the most innocuous action or phrase. I may describe something completely unrelated and I'll think, "Oh! I think this character should have that trait." It can dramatically change the direction of a story, but that's when I know I'm on my game.