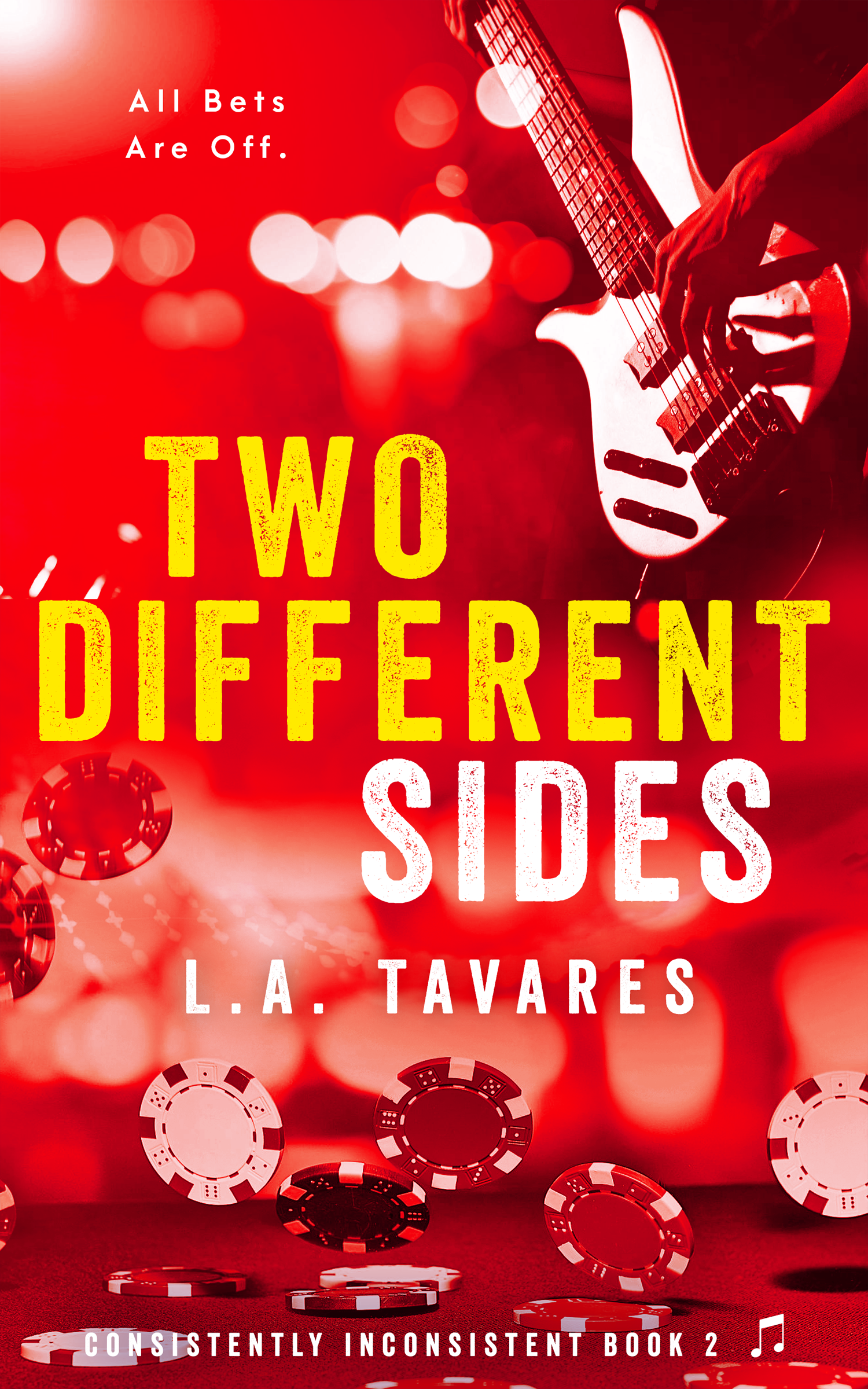 By L A Tavares

Book 2 in the Consistently Inconsistent series

All bets are off.

Blake Mathews is out of luck.

The music, the fame, the love of his life… They’re not enough for him. His tendency to make large bets at expensive tables could cost him everything—the band, the money and the girl.

Blake thought things couldn’t get any worse, but he lost that bet too. Someone from his past shows up after a decade of silence with new information about who Blake is, where he came from and the fact that he has family who is closer than he thinks.

Told on two different timelines—now and then—the story recounts the upbringing of the bass guitarist and his friend, lead singer Xander Varro, dating back to the two meeting, starting the band and the trouble and triumphs that unfold as the two grow to the present-day versions of themselves.

For Blake, history tends to repeat itself, but with the help of his band, the girl he’s been chasing since his teen years and the family he didn’t know he had, the chance to break the dark cycles is in the cards for him, if he chooses to play the game.

Reader advisory: This book deals with a gambling addiction and parental abandonment. This book is best read in order as part of the Consistenty Inconsistent series.

It was about damn time I took things into my own hands.

I’ve loved her for too long and have nothing to show for it. For years I’ve admired her from afar and she’s given me none of her time and even less of her heart, yet she holds mine in her hands. She always has.

Touring and being on the road is exactly what I always wanted, but I wouldn’t have any of it without her—in more ways than she even knows.

Now, I stand outside the doors of The Rock Room, ready to give the performance of a lifetime without ever stepping on the stage at all.

The doors creak as I push them open and strut across the venue floor. My steps echo and my heart rate quickens. She’s on the stage walking back and forth in heeled knee-high boots. Her blonde hair falls in curls down her back.

“Kelly!” My voice echoes as it leaves my throat and bounces off the walls of the empty venue. She looks at me and her mouth parts, but I don’t give her time to speak. I have to get this out. If I don’t say the words now, I never will. “I have loved you since the first time I saw you. I’ve never been able to give my heart to anyone else because it has always only been yours. I’ve wasted a lot of time trying to get your attention and the truth is, I’ll keeping wasting it if you ask me to. I will wait for you, but I’m hoping you won’t make me.”

There is a long pause. She’s completely still—unmoving and holding her breath. I swallow, hoping she speaks because…I’ve got nothing else.

“Blake,” she says, my name echoing through the venue. “Can we…can we do this later? We’re auditioning musicians for the house band…” She lifts her hand and points to the seats where bodies fill the spaces that I’d assumed were vacant. I rub my hand at the back of my neck while my cheeks flush something fierce. With no other option, I turn on my heel, leaving without the girl but with my fill of embarrassment for the next few years.

I slam the doors open and stomp through a two-day-old puddle in the alley behind The Rock Room, but the doors reopen and she runs out behind me, her boots hitting the water as she heads toward me.

“Do you ever stop talking?” She grabs the collar of my leather jacket, pushes my body against the cold brick wall, then pulls me toward her—against her—and places her mouth on mine in a kiss that was more than worth the wait.

“I’ll come by tonight,” she says through the kiss. “I have to go back to work.”

“Mmm, you should quit.” I keep her close to me.

“Not a chance.” She steps away, adjusting her clothes and hair before giving me a smile over her shoulder and heading back inside. I slide down the brick wall and sit in the alleyway. Though the ground is wet and cold, this all feels too good to be true—a dream.

Hours later, I’m still convinced I made up the whole event—fabricated it to fulfill some decade-plus-long unrequited love quest I’ve been on since my preteen years. But I sit here, playing new riffs and exciting patterns on my guitar that I’ll never remember later because my mind is occupied with thoughts of only her. There is a knock at the door. I ditch my instrument and head to answer with my expectation bar low. With my luck, it will be a package to be signed for or my band mate and best friend, Xander, dropping by without notice.

The knob clicks as I open the door, slowly and cautiously, preparing for the worst but hoping for the best.

“Where were we?” Kelly speaks in a velvet tone and she waltzes in the house like she’s been here a million times. She slides off her jacket and drops it to the floor, turning toward me and pressing me against the door as I close it.

Soon she is lying in my bed and arches her back as I slide off what little clothing she has left. I can hear her inviting, requesting breath in my ears as I lean forward over her with my chest touching hers.

She’s the very picture of alluring—her body bare and lit by only the moonlight peeking through the windows. Goosebumps appear at the surface of her skin, following the trail of my fingers.

My gaze falls to her ribcage, where a tattoo of song lyrics is scripted into her skin. I press my lips to the inked words.

“I like this.” I run my thumb over the black script.

“You should. They are from one of your songs.”

“How long have you had it for?” I ask between kisses.

I think for a moment that all the years I spent watching her from afar, she was watching me too.

“I’ve always wondered about these.” She lightly glides her fingertips over the right side of my chest and shoulder, touching the pictures embedded into my skin. “What’s the story?”

“I was young, stupid and best friends with Xander.” I laugh but she’s still staring at the design, tracing the image with both her hand and her eyes. “Seriously, Kelly. There’s no story.”

The image is a half-sleeve that extends over my shoulder and to my chest. The collage features a pair of dice, a shamrock and one-hundred-dollar bills twisted to look less like money and more like roses. At its center sits five cards meant to be a royal flush, all hearts in suit. The ten card starts the piece and a Jack sits next to it. At the other end there is an Ace and a stern-looking King. A fifth card ties the flush together. Well, it would…if it were filled in.

I push my hair back off my forehead and sigh. She’s not going to like the answer to this question.

“I read about this tattoo in a magazine once,” she admits. A pink color blushes at her cheek.

“So, you already know then.” I lean in and kiss her in an attempt to distract her, but my efforts fail, and she continues to press for an answer.

“I know what the magazine says. I want to know if you tell a different story.”

I give up and roll off her, collapsing in a heap.

“In the article I read you said you didn’t fill it in because there is—and I quote—no one Queen.” Her lip curls at the corner and she raises one eyebrow.

That part of the story is somewhat but not all true. At the time I was young, single and carefree. I had developed quite the reputation and nothing anyone said bothered me. If they photographed me in some trash tabloid every day with a different woman? So be it. I wasn’t sorry for how I had lived my life.

But I’m older now. I’m changing, hopefully for the better. I gave them the answer that magazine wanted. They printed the words they thought would sell.

I roll to one side and look at her then run my fingers through her mess of blonde hair. “It’s not that I couldn’t commit to only one Queen, Kelly.” I graze her neck with my lips, and she tilts her head back. I pull my body up over hers and look into her perfect eyes. “I just hadn’t found her yet.”

A short while later in the pitch-dark hours, she breathes even, slow-paced breaths as she sleeps next to me. My phone buzzes wildly on the bedside table and I answer it, groggily, rubbing the tired from my eyes.

“Xander?” I say once I hear the voice, and Kelly wakes too, wide-eyed and wondering.

“Is everything okay? Is Natalie okay?” She jolts to an upright position, covering herself with the sheet.

“Yeah, yeah. Natalie is fine.” I stand from the bed then hop into my jeans, after I pick them up off the floor. I swallow hard. She’s not going to take this well. “Xander got arrested.”

Her eyes widen and she doesn’t need to ask the question for me to know she wants more answers.

“He went to Julian’s house. Mariah was there. I don’t know all the details, but he’s in real trouble this time, I think.”

“He…went to Julian’s house?” Her voice sways closer to anger than worry. “Do me a favor, Blake?”

“Anything,” I say, sitting at the edge of the bed beside her.

When it comes to romance, L A doesn’t have a type. Sometimes it’s dark and devastating, sometimes it’s soft and simple - truly, it just depends what her imaginary friends are doing at the time she starts writing about them.

L A has moved to various parts of the country over the last ten years but her heart has never left Boston.

And no, the “A” does not stand for Anne.

Share what you thought about Two Different Sides PRINT and earn reward points.

Other books in the Consistently Inconsistent seriesView Series Page