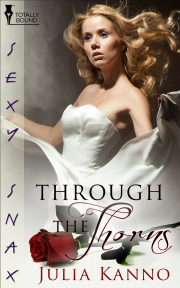 The woman he loves has come back from the dead—and unfortunately, this rose is all thorns.

Finally, after two years of mourning, Zac's brother has agreed to sell the house he all but abandoned after the death of his wife.

In the spirit of helping his brother move on, and of course the continuous harassment from his sister, Zac agrees to take a much-needed vacation from work and pack up what remains of Rose's belongings. What his family doesn't know—actually, no one knows—is that Zac never quite stopped being in love with Rose, not after they broke up in high school and certainly not after she married his brother.

Zac is well aware that a weekend spent packing up what's left of the only woman he's ever loved will be little more than torture…with a side of emotional hell (alcohol sold separately).

Upon arrival, he immediately notices how the house and the surrounding garden have fallen into disrepair. It isn't until nightfall that he truly starts to realise just how…disturbed the house really is. After a few doors slam and the phrase 'writing on the wall' comes to life before his very eyes, Zac is terrified enough to flee. But before he can make it to the door, he is confronted with the ghost of his sister-in-law, Rose.

However, the sultry seductress before him and his sweet, shy Rosie are two very different entities. And as much as he would like to believe otherwise, it seems this rose is all thorns.

Can he stop himself from touching her regardless?

Reader Advisory: This book contains rough sex, with a touch of dubious consent.

Sometimes good intentions just didn’t cut it. Zac tightened his grip on the steering wheel of his truck and found it a poor substitute for his sister’s neck. Was it something in Haley’s genetics? Were all sisters like that? Were they all hellbent on driving their brothers into the ground with their insanity disguised as concern? He didn’t think so. If they were, the murder rates would be steadily rising. He was sure of it. Thoroughly blaming his mother for the basket case he called ‘sister’, he turned into the suburban neighbourhood his brother and late sister-in-law had made their home during their short marriage. Virginia was on the cusp of spring and he rolled down the window, eager to sample the scent of flowers in bloom. The crisp, chilly air cooled the sweat dampening the back of his neck. It was a pleasant relief. Well, sort of. I don’t want to be here. Regardless of the blues and pristine reds of the houses flying by him, the place reeked of death. His colourful surroundings were almost morbid, considering the turmoil he knew was waiting for him in the last house on the left. Zac was as happy as any brother could be for Stacey. His brother had climbed through the depression that had nearly sent him spiralling into self-destruction after Rose had...died. After three years, Stacey finally seemed ready to move on. Unfortunately, moving on meant selling the house where it had happened. It meant boxing up Rose’s studio and trying to get things into some semblance of the realtor’s standards. Zac’s throat worked as his mind tormented him with a picture of Rose’s silvery-blonde hair and sweet blue eyes. He fought not to close his own eyes as he eased on the brake and flicked on his blinker. He didn’t want to see the house again. He didn’t want to be faced with her memory. Hell, he’d nearly worked himself into an early grave trying to find some sort of peace after it had happened. His heart ached, and he pushed aside the memories trying to claw their way to the surface. Almost of its own accord, his gaze wandered to the left, where the house he’d been trying to avoid loomed ahead. The place hadn’t changed. The white paint was a little lighter, but the red door still gleamed in the morning light, as if freshly painted. It was the doorway to certain hell. He tensed with the urge to stomp on the gas and leave this unpleasant task to his brother. He was the one who’d had the pleasure of being Rose’s husband, for however short a time. Why should Zac have to suffer the hell of sifting through memories of her death, without the buffer of blissful memories to protect him? Stacey should be here, not Zac. Memories of his sister’s nagging rang in his ears, and he reached for the volume, determined to use Axel Rose’s catlike whine to drown her out. Stacey was a big boy. He could pack up the house on his own. Zac didn’t need to hold his hand. And he had no intention of revealing anything to his brother that might shed light on Zac’s sudden need for a steadying hand. He bit the inside of his cheek and shook his head. No. He couldn’t run. That kind of behaviour would no doubt alert his brother that something was wrong, and he had no intention of ever letting his brother discover the truth. Stacey could never know Zac had loved Rose the way he had...and that he still did. As far as his brother knew, Rose was just Zac’s high school sweetheart, and they’d been over long before she and Stacey had started dating.
Buy Now

Share what you thought about Through the Thorns and earn reward points.