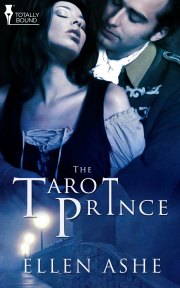 Echoes never end when the night begins to whisper.

Since childhood Annalise has listened to the mystifying songs that float over the Devon Moors to her cottage window. Suddenly its lulling gentleness changes into an urgent plea - a glorious Queen has stepped from the mystical world of the Tarot - showing Annalise the figure of a cloaked man, his head bowed to a crippling despair of loss and regret, blinded to the imminent threat of a blood thirsty enemy. He is her chosen and instantly Annalise understands her destiny is entwined with this tortured Nobleman. Only she can touch him…and warn him.

But how could this be? She is a poor peasant girl with humble dreams of being a lace maker like her Aunt Sadie. Yet when she explains the vision to her aunt, Annalise learns of a dark and powerful Venetian Soothsayer who was rumoured throughout Europe to be immortal, a godless soul, lost to roam the earth without love or hope. His name: Medardo de Vale.

The name alone unlocks her inner passion, produces memories of a past life that are not her own, and a love so profound its echo has survived the centuries. Annalise has no other choice but to find him and warn of an impending evil that draws ever closer, an evil that will stop at nothing to procure the secret elixir of Immortality. Will he believe what she says even though it makes no sense to her? And what perilous path might he take her if he does believe? It is a chance she must make.

Medardo de Vale is The Tarot Prince, and the love of a simple peasant girl is his only hope for survival.

She knew him only as the Soothsayer, recommended by her aristocratic friends to cast a prediction, assure her that her choice of a wealthy husband had been wise. She had presented Medardo de Vale with crimson wine and rich foods in a lavish boudoir, all of which he’d accepted with courtly etiquette.

Her intentions, however, went far beyond an interest in prophecy. She meant to seduce him. He would allow her to do so.

“What will happen?” she asked softly.

Like all those before her, she’d asked the wrong question. She shouldn’t have asked what will happen, but what could happen. Fate’s path was not etched in stone. It flowed like a slim silvery stream, winding past obstacles and taking the path of least resistance. She was not to know this, and the Soothsayer, Medardo de Vale, was far too wearied by the philosophies of life to explain.

He removed the Cards from his jewelled gold casket, spreading out those that revealed her choice of husband had not been wise and foretold the strife that would soon befall those who wallowed in opulence and power. She, too, would suffer its consequence. Escape was possible but not probable. As she watched him with glistening blue eyes he lied about her impending fate as not to frighten on these, her last days of life. “You will reap what is owed,” he said. “Your every desire will be fulfilled.”

Her toe rubbed against his leg beneath the table. Painted lips curled to a wicked smile. “I desire you, monsieur.”

He had told her not what was true but what she wanted to hear. And now she would reward him. For one night, he would be her lover. If there was peril involved in such an indiscretion, Medardo de Vale was not concerned. He was unlike other men. Nearly three centuries of anguish had taught him to be fearless. No blade could sever his life from his body. No poison could afflict his blood. Age could not cripple him. Immortality and its twin eternal loneliness were his curse.

He graciously accepted her offer of an illicit tryst. For its duration he might be released from the pain that infected his timeless soul. Even if only temporarily.

Their first kiss was the last. He went to her bed, took pleasure from her pale flesh, but did not offer what wasn’t there to give—love.

The one woman he had loved was dust now. He was condemned to eternity without her. Fate had been unkind because he had learned far too late that he was arrogant man. The road he now followed was endless and barren. He had given the Dragon—the Beast—his soul in exchange for eternal life. The pain of endless life without love was excruciating. All joy had forsaken him. His Cup was empty. It was a cruel punishment, yet likely a justified one. Still, he could forget his trespasses while in a woman’s arms, while buried into the heat of an attentive body. There were only two avenues of pleasure left for Medardo—the passions of the flesh and inhaling the Dragon’s smoke. This night was for flesh. This night he would forget his curse.

In the predawn hour, he gently rose from her bed and dressed.

“Soothsayer,” she whispered. “Must you go so soon?”

He felt sympathy for the future he had seen in her Cards. The city was on the verge of vile upheaval, the barrier between opulence and paucity too vast. In the distance beyond the open shutters, he already heard angry voices, poverty’s cry, boiling into an inevitable revolution. He sat on the edge of her bed, stroked the shadowed line on her throat where the executioner’s blade would fall.

She sighed and turned, returning to her dreams.

He watched her, refusing to judge the morality of either an individual or the society in which they lived. He had drifted through Europe, venturing far, always on the move. He had seen much, the evil in mans’ heart as well as the virtues. But he was not one who could judge any of what he witnessed. He could judge only himself and his own pitiful weaknesses.

This day he would pass from the city, travel farther north to obey an unspoken urge to seek out London. Evil lurked in those streets as well, but if he kept moving, kept hiding, it would not touch him. Only that within him could. That dark void he could never escape.

He fastened his hair behind his head and shrugged into his velvet coat. Soundlessly, he crept to the table where he picked up the small gold casket that housed his precious Cards. Clutching it to his chest, he closed his eyes. If he inhaled the Dragon’s breath, rapture would open his mind. With the smoke, he could venture inside the Tarot’s mystical domain, sit with the Queen of Chalices and stare at her beauty while listening to her words of wisdom.

Since learning to unlock the door to the Card’s royal realm, he had always been welcomed and given the freedom to move amongst each picture, conversing with every character, great and small. They were his friends. Of late, however, he was too despondent to seek out any, including royalty. Yet by holding the Cards he sensed the Queen’s presence.

Loneliness was at its deepest during the hour before the dawn.

“Forgive me,” he prayed.

He squeezed the box as though clinging to the last fraying threads of hope. “My Queen, I am not worthy of a royal title. Close your Chalice for I am but a pauper in this world. I am less in yours.”

“Lips that are dry more so need the sweet kiss of wine.” His breath caught. Her poetry had always touched his heart. She presented an ancient wisdom simply, beautifully and eloquently. He had been an eager student of the unseen long before he discovered the path inside the Tarot. He had sought alchemists, teachers, philosophers, sorcerers, and he had walked a dangerous path with the collection of knowledge gained from each. He understood that secrecy was of the utmost importance and that his charm and good looks opened many doors. As a dedicated student he had heard much, even what was unsaid, and quickly combined all he had learned into powerful concoctions. He had discovered that by chasing the Dragon his mind opened even further, guiding him to the feet of the greatest teacher of all—the embodiment of virtue—his Queen. He had vowed to her then that he was her faithful servant. She had accepted his offer. And she had taught him ancient wisdoms in a voice both musical and pure. Her poetry had filled his spirit and swelled in his heart.

But it could not do so now.

Time had darkened that first purity of enthusiasm. Time and, the greatest burden of all, travelling through each day without his one true love.

“No, Dardi. Faith is not lost. And Hope is a cherished friend.”

A streak of anger slashed through his breast. “I have no hope,” he protested. “Love lies buried in a Venetian crypt, and I wish to lie there, as well! I am condemned without her!” 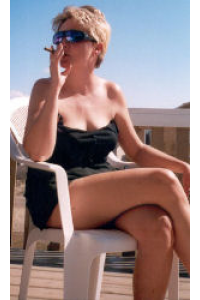 You have an energy, the Clairvoyant told me. "People are attracted to you because of it." She paused. "Both living and dead."

This revelation was shared with me not so long ago. Looking back on forty some years I could see how this simple statement could explain much. Strangers who feel comfortable telling me their problems, children who smile and take my hand, even stray animals- unapproachable- yet they respond to the sound of my voice. But most of all it has been that sense that I am never alone. A voice when no one is there, footsteps following me, my name called out in an empty house, a weight sitting on my bed in the dead of night…

"You are an old soul," she smiled. "It comes through in your creativity."

I write because my mind has always been a tumultuous rush of noise- voices- continually chattering. One by one these ?people' have come forward to tell me ?their' stories. I listen and I type. I wonder sometimes just how thin the line is between reality and madness. Yet I believe in what is unseen. I believe that shadows move. Each voice has a story, and I am pleased that they have faith in me to tell those stories.

Ms. Ashe is a master of her craft as she certainly got me to enjoy reading her book.

Share what you thought about The Tarot Prince and earn reward points.