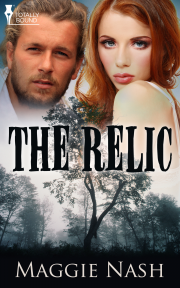 They used to be a great team, but could they forget the past long enough to save their lives?

Finding herself in the wilds of a Penang rainforest wasn't something Magda was exactly happy about. Being there on a mission to recover an ancient relic that threatened world peace certainly had its appeal, but the heat, the bugs and wild animals quickly cancelled out any of the excitement of the chase. Adding to her misery was the arrival on the scene of the last person she ever wanted to cross paths with. Vincent Stone, her rival in the search for the relic, and her ex-lover. The man who'd ripped out her heart and trampled on it had no business being in the same country as her, let alone the same town.

Vincent isn't doing much better as he tries to remember why he'd broken it off with her. She made him feel more than anyone else but in his line of work, and with his past history, he didn't have room for a relationship. But damn, she made him want one.

Fate has a way of playing with realities though and as they teamed up they both came to realise that sometimes it was better to just go with the flow. They used to be a great team, but could they forget the past long enough to save their lives?

This will be the last time.

Vincent Stone lay on his back, his arms crossed behind his head, trying to convince himself that making love with Magda one last time would be make it easier to leave.

They hadn’t been together long, but Vincent knew a long-term prospect when he saw one. Magda was definitely a lifer, and no way was he ready for that kind of relationship. He hoped he hadn’t left it too long.

Tonight was meant to be a break-up dinner, but all thoughts of that had gone out the window with just one look at her gorgeous body, those legs that went on forever...not to mention those amazing turquoise eyes. Lips—let’s not forget the sexiest lips on the planet. Bloody hell. Instead of dinner, they’d skipped the main course altogether and gone straight for dessert.

And what a delicious dessert.

He didn’t do long-term for a very good reason. He sucked at them. Not only that, but he lived with what happened to his parents. Long-distance relationships didn’t work, end of story. No way did he want to be responsible for the pain he’d seen in his mother’s eyes every time his dad had left. No way would he bring a child into the world only to go through what he’d gone through.

The problem was he really cared for Mags, and if he wasn’t mistaken, she really cared for him too. There weren’t many women who could keep up with him, or keep him entertained on an intellectual level as well as in bed, but Magda was a dynamo in and out of the bedroom. He knew she would never accept his reasons for breaking up. As always, she’d come up with some logical reason to shoot his argument down in flames and he’d be stuck. That’s why he had to kill any feelings she had for him for his plan to work.

Tomorrow, she would hate him, and as much as he knew it was necessary, he wasn’t looking forward to it one bit. However, he refused to think about that now. He looked over at the beautiful woman standing before him, and even as he thought about how it was going to make things more difficult for him, he knew he had to taste her one last time.

“Come back to bed, gorgeous.”

Magda smiled, turning her head as she stood naked leaning against the balcony rail of her Sydney harbour-side apartment. It was almost dawn and no one was about to see her, She’d always had a bit of an exhibitionist streak in her and Vincent knew the thought of being caught naked more than turned her on. From the slight flush of her skin, he could tell this time was no exception.

Pushing away from the edge, she moved back to the door, her hand resting on the handle of the sliding door. “I was just admiring the view.”

Vincent sat up, the satin sheet sliding off his body. “The view from here is better.” Anyone with half a brain wouldn’t be able to resist the molten desire he saw in her eyes, and since he never missed an opportunity when he saw it, he wasn’t about to ignore that particular invitation. She walked slowly back to him, swinging her hips and rubbing her hands over her breasts, squeezing them gently and presenting their tightened peaks to him for inspection.

He jumped up, pulled her body against his and rubbed his hands over her buttocks. His tongue circled her ear, as he blew softly, his hot breath teasing her skin. “I love what I see, Mags, and I intend to love your body a lot more before I’m done.”

He nuzzled her neck, savouring the fruity smell he would always associate with Magda. “Mmmm...but you must be tired. We’ve already gone two rounds.”

Magda moved towards his mouth in a trail of open-mouthed kisses that sent tingles down his spine. “That’s what you do to me, baby. With you, Vincent,” she whispered, “I can go all night.”

Manoeuvring them around to the bed, he gently pushed backwards until Magda lay on her back and he was stretched out over her, rubbing his body back and forth over her mound.

His mouth came down over hers, devouring her, taking all she had to offer and demanding she give more. She moaned as he gently ran a finger along her folds, his nail scraping her tender bud before sliding inside her. His mouth left hers, making its way to her breast, suckling hard on the tip as his free hand squeezed her other nipple between his thumb and forefinger.

He inserted another finger and looped them both in a circle, catching that spot he knew would drive her wild. “Is this what you mean?”

She moaned loudly now as he felt her lose control. He eased back slightly as he didn’t want her to come just yet and if he wasn’t careful, she could explode at any minute.

“Your wish is my command.” His mouth left her nipple and kissed its way down her body until it latched on to her clit, sucking and biting it alternatively.

She nearly jumped off the bed when he inserted another two fingers, circling furiously inside her, repeatedly rubbing against that most sensitive bundle of nerve endings while his tongue and teeth continued their assault on her throbbing clitoris.

“Oh God!” The first waves of her climax racked her quivering body, sending her over the edge as her muscles clenched around Vincent’s fingers.

Vincent moved back up her body and reclaimed her mouth as he entered her.

“So good,” she whispered against his mouth. “So fucking good, Vince.”

Opening his eyes, Vincent caught sight of the look of ecstasy on Magda’s face as her internal muscles clenched around him. He was going to miss that the most. His body stilled for just a second before that one last thrust, and he felt every last drop of his enjoyment emptying into her body.

As he rolled to his side, hugging her body close to his chest he felt the sharp pain of loss, knowing that their time together was at an end. His last thought as he closed his eyes was that he had to agree with Magda.

It was a fabulous fucking.

Share what you thought about The Relic and earn reward points.