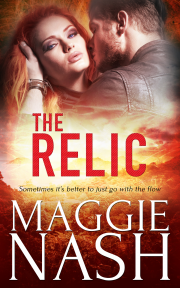 They used to be a great team, but could they forget the past long enough to save their lives?

Finding herself in the wilds of a Penang rainforest wasn't something Magda was exactly happy about. Being there on a mission to recover an ancient relic that threatened world peace certainly had its appeal, but the heat, the bugs and wild animals quickly cancelled out any of the excitement of the chase. Adding to her misery was the arrival on the scene of the last person she ever wanted to cross paths with. Vincent Stone, her rival in the search for the relic, and her ex-lover. The man who'd ripped out her heart and trampled on it had no business being in the same country as her, let alone the same town.

Vincent isn't doing much better as he tries to remember why he'd broken it off with her. She made him feel more than anyone else but in his line of work, and with his past history, he didn't have room for a relationship. But damn, she made him want one.

Fate has a way of playing with realities though and as they teamed up they both came to realise that sometimes it was better to just go with the flow. They used to be a great team, but could they forget the past long enough to save their lives?

Publisher's Note: This book has previously been published by Totally Bound Publishing. It has been expanded, revised and re-edited for re-release.

Magda wiped the sweat out of her eyes for what felt like the hundredth time in the last hour. Bloody stinking rain forests. How did she get so lucky to score this assignment? Just wait until she got back to The Mansion—she intended to have something to say about always getting the dirty jobs. Phoenyx and Lyonene were probably lying around in the spa drinking champagne instead of manning the computers and digging up the research to help her with this mission. And as for Joell—ha! Next time there’s a job babysitting hunky male models, I’m getting in first! That crazy woman even had enough time to find a man the last time she’d gotten that cushy job.

Oh no…no more cloak and dagger and crawling through steamy, insect-infested jungles for Magda. No way, José. Next time she got sent out in the field, it was going to be a fun assignment. Limos and five-star hotels all the way, baby!

It wasn’t like they needed the money. All of them were bestselling romance authors, editors and graphic artists. They did the super heroine bit on the side because they liked to help people. Of course it was a fantastic way to keep up the training, and the research was invaluable. But that wasn’t the point! She must have been insane to take on this job!

She turned her head at a loud shrieking noise and reached for her Browning Pro nine millimeter. She never left home without it. The noise could be one of two things. Monkeys or birds—neither of which she was particularly fond of. The shadow that briefly swept overhead confirmed the creature was of the feathered variety. She replaced her gun in the special holster inside her shirt and waited for her heart rate to return to normal. It had to be a bird of prey of some variety, no doubt, and thank the Lord she was here on the ground.

Half an hour later, when she found another tear in her cargo pants courtesy of the thick undergrowth, she wasn’t so sure.

Bloody hell. This was supposed to be an easy job.

No danger. Go in, find the lost relic and get out.

It’d been two days now and she still had no idea where the object was, and from the stories she’d been told, this wasn’t your average, everyday, garden-variety relic. This one had some pretty amazing legends attached to it that she had only just begun to learn about.

Boss, the unofficial office manager of The League of Amazing Women, had neglected to tell her that this particular relic was made from a chunk of crystal from Alexander the Great’s crystal sarcophagus. Even she had heard the stories surrounding the mystery of his burial place. Several different groups claimed they knew its location, but were hiding it to prevent wars over its ownership.

And protect it they should, if the stories were true—that the holder of the sarcophagus would assume power in the country in which they resided. Just imagine if terrorists got their hands on it?

Of course this little piece of crystal wasn’t the whole shebang, but hey, someone must believe it had some sort of power. The locals had definitely closed ranks and that was the one thing she was sure of. Since she’d arrived in Penang, she’d hit one brick wall after another.

Damn. She looked down at her ankle and saw the trickle of red seeping through her sock.

Why is it always leeches?

She stopped and reached in to her backpack for the salt. The slimy little creature curled up and came off in her fingers while she squished it the best she could before she wrapping it in a leaf and hurling it to the jungle.

Looking up, she squinted at the sun and wondered just how much farther it was to the small village the guide at the hotel had told her about. Okay, he hadn’t exactly come across as the honest type. He wouldn’t even look at her until she flashed a wad of money at him. However, one thing she did know about human nature was that people did not want to lose their meal ticket. So if he wanted her to come back for more, he would at least have to steer her in the right direction the first time. Unless, of course, someone was paying him more to send her on a wild goose chase, but she didn’t want to think about that right now. Nope. She was going to think positive all the way. And if she continued to say it, it might actually be true.

Another five minutes and the vegetation began to thin a little. In another ten, she walked into a clearing to find a group of three huts.

The walls were made of some sort of mud concoction and from what she could see, no windows. No doors were visible so she walked toward the edge of the closest one to investigate more.

This short novel is packed full of intrigue, danger, and a whole lot of passion! I thought the plot was a lot of fun, and the sex was steamy hot in all the best ways.

Share what you thought about The Relic and earn reward points.