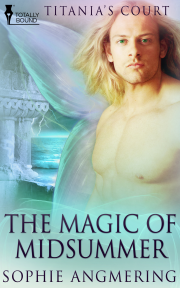 The Magic of Midsummer

That's the problem with screwing your boss once… maybe twice. And Maggie knows Jack Greenfellow is a great boss. A really great boss…really professional. Well most of the time…

On the very odd occasion.

Maggie is still struggling to recover from a bang to the head, the kind of thing that happens if you are crazy enough to drive your car into a ditch on the shortest day of the year. Fiercely independent, Maggie is annoyed because the incident has resulted in people treating her as if she is now, suddenly, an exceptionally delicate individual. Puzzled, because it has also left her with some really strange memories from the night of the winter solstice.

Fire fairies, bonfires, magic, mayhem and the dark king of the fae.

A Jack Greenfellow that is very special.So special, that if she told anyone she would be back with the men in white coats again.

Something that is so not going to happen.

Maggie sighed for the umpteenth time and crossed her legs. She scanned the meeting room from her position in the back row. The security spokesman from Head Office droned on, and on, and on. Just how long is he going to keep this up for? Maggie thought, flicking her cheap biro back and forth, before craning her neck one way, then the other. Jack Greenfellow, her boss, was nowhere to be seen. The air conditioning in the office had broken and as a result the room was becoming unbearably hot and stuffy. A trickle of sweat made its way down the middle of Maggie’s back. One of the perks of being the boss was obviously a carte blanche to miss incredibly tedious meetings given by patronising specialists, Maggie concluded as she reached into her pocket for her mobile phone. She discreetly tapped the screen. The last text from Jack was still the simple, stark instruction—'Be there on time. Don’t miss it'. Jack had obviously reasoned that she would not disregard a direct request even though she had been booked to go offsite. It had been important, a technical specification with a new client to go through. What a waste of time. There was nothing new in the procedures being outlined by the speaker, most of it was common sense. The door to the conference room opened catching Maggie’s attention. Oh. My. God Jack Greenfellow as immaculate as always, right from the top of his perfectly groomed hair to the toes of his Italian handmade shoes, walked into the room. Greenfellow, head of the corporation that had purchased a controlling share in Outland Electronics just six months ago, certainly had presence. The speaker stopped his monotone delivery long enough to greet the boss in the most animated voice Maggie had heard him use so far in this interminable presentation. Oh, why don’t you just get a room? Maggie sniffed at the speaker’s effusive welcome. Jack scanned the room, acknowledged one or two people with a nod of his head, ignored a few others including Maggie, then sat down. As he did so, the exquisitely cut suit jacket shifted slightly across his shoulders before settling back into place again. He is without doubt the most gorgeous, gorgeous man. Maggie braced herself for the sensation of her stomach dropping so low she felt it virtually hit her clitoris. Every time she saw him, her insides seemed to lurch in reaction. It was most uncomfortable. Almost as uncomfortable as it was laughable that of all the men in the office of Outland Electronics, the one she had most recently had a sexual encounter with was...the beautiful Jack Greenfellow. Very funny, in fact Maggie could almost hear the sniggers as she sat surrounded by all her suited and booted colleagues. Of course they had no idea, and it had been over six months ago. Jack had been a complete gentleman about their encounter. The main feature of which had been Maggie throwing herself at Jack in the most forward way. She still died a little inside at the embarrassing memory of it, but the frisson of awfulness it brought her was far better than the suffocating fog of boredom that was currently settling in her mind. She had never been the most impulsive of people, but when she was close to him it had a most deleterious effect on her control. There was something about him that made her behave quite outrageously. But it’s okay, she reassured herself hastily as she felt a red flush prickle at her neck. After all, it had turned out quite well. Sex with Jack had been spectacular. From what Maggie could remember. Her relationship with Jack had cooled considerably since that first time. It was probably as a result of the accident. Or maybe the delusions that she had subsequently had about Jack Greenfellow after a forgotten knock to her head. The accident had happened when she’d been on the way to the Christmas party, alone. Maggie’s recollection of the night was vivid, but so disjointed that she had come to the conclusion that it must have been a concussion induced reaction to the injury she had suffered when she’d lost control of her car.
Buy Now

I'm British and live by the sea just outside Brighton in West Sussex. I've been lucky enough to have a huge range of occupations ranging from being a top European IT consultant through to mother of three. My jobs in the past have invariably involved a lot of travel and thinking up long involved plots, along with feisty heroines and controlling heroes, has always been a favourite way of mine to make time pass when I have been sitting at the wheel of a car or on a train.

I've a soft spot for happy endings, with characters who get what they deserve and with lots of sauciness on the way.

Hopefully you'll enjoy the same things I do.

Share what you thought about The Magic of Midsummer and earn reward points.