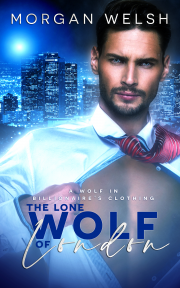 The Lone Wolf of London

Alexander Payne always gets what he wants... and he wants her.

Investment Banker Alexander Payne knows that the recent spate of murders in the City of London means only one thing: they are coming for him. Wolves do not belong in cities—that’s what he was always brought up to believe. But he is no ordinary wolf and has harnessed his lupine tendencies to become one of the wealthiest men in the country, if not Europe. Led by sharp, killer instinct he always wins. Always.

Now he has to fight against those who want to take advantage of his power and privilege—his own family. He has no intention of becoming like his father, a brute of a man and a poor excuse for a wolf. He will do whatever it takes to make sure that doesn’t happen. The bodies are piling up and fingers are starting to point to him. When Detective Sergeant Cora Daniels turns up at his office to question him, he is instantly drawn to her. Though she could be his downfall he has no option but to follow his instincts. Because he always gets what he wants… and he wants her.

Morgan Welsh is a UK writer of paranormal and fantasy romance. She loves everything dark and gothic and will never tire of reading or writing about vampires, witches and the fantastical. Add some steam and she’s in her element. She lives with her husband and two children and somewhere dark and distant in her head. She’d love for you to join her there.

Share what you thought about The Lone Wolf of London and earn reward points.