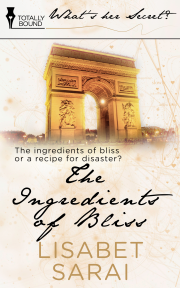 The Ingredients of Bliss PRINT

One sexy French chef. One kinky American TV producer. One ambitious Chinese gal who thinks she wants them both. The ingredients of bliss? Or a recipe for disaster?

Accomplished cook Mei Lee ‘Emily’ Wong knows exactly what she wants—her own show on the Tastes of France food channel. But life is full of complications. First, her deceptively nerdy producer, Harry Sanborne, initiates Emily into the delights of submission. Then her boss, legendary chef Etienne Duvalier, begs her to dominate him. Emily just can’t resist—especially when Harry orders her to explore her inner Mistress. Suave and sexy Etienne will do whatever she asks—in the bedroom if not in the kitchen. And Harry, her lovingly diabolical Dom, adores pushing Emily’s limits.

When the network sends the trio to France to shoot a series of cooking shows on location, Emily knows her career is on the upswing. Her plans fall apart in Marseille as a Hong Kong drug syndicate kidnaps both Etienne and Harry. The Iron Hammer Triad mistakes Etienne for notorious gangster Jean Le Requin, who has stolen their drug shipment, worth millions. Emily realizes she must find the real Le Requin, retrieve the purloined dope, and bargain it for Harry’s and Etienne’s lives. The secret she’s been keeping from Harry might prove useful. Still, what chance does one woman whose knife skills are limited to chopping vegetables, have against the ruthless cruelty of two criminal organisations?

Harry looked up from one of his favorite positions—crouched between my spread legs—and searched my face. The usual mischief gleamed in his cinnamon-brown eyes—a bit unfocused without his glasses—but his lush mouth showed no trace of a grin.

“Shouldn’t that be who, rather than what?” My laugh sounded forced, even to my own ears. It turned to a squeal as he swept his tongue along the length of my cleft, ending with a neat flick to my clit.

Sometimes his intuition scared me. “It’s nothing, really.” How did this guy know me so well, after a mere three months?

“Ow!” He’d pinched the sensitive flesh of my inner thigh.

“Do I have to beat a confession out of you—again?”

His casual reference was enough to send my mind spinning back to that wild night when he’d first revealed his kinky streak. Tied to the iron railing at the look-out atop Twin Peaks, my panties around my ankles and my dress bunched up around my waist, I’d received my first searing lesson in submission.

Unruly hair fell into his eyes, making him look younger, and rougher, too—a bit like Brando in A Streetcar Named Desire. I wanted to brush those black locks off his brow, to touch him, to soothe and reassure him—to feel his lovely muscles shift under the tanned skin of his broad shoulders. Bound hand and foot to the bedframe, all I could do was writhe and yelp as he burrowed his face in my pussy, while raking my thighs with his fingernails.

Pain and pleasure. Pleasure and pain. Wasn’t there a time when I could tell the difference?

Whatever he was doing, I liked it. I couldn’t pretend that I didn’t.

He knew exactly how to play me, when to suck my quivering clit like a piece of hard candy, when to back off and trace my labia with the barest tip of his tongue.

“Oh God…Harry…” Everything felt exquisite, but I was far, far from release. I knew this and so, of course, did he.

“Damn it, Emily, I thought you trusted me.” His lips looked redder than normal, maybe even a bit swollen.

The distress I read in his face felt like a physical blow. “I let you tie me up…”

“So why won’t you tell me what’s on your mind, love?” He settled back on his heels and regarded me gravely. “You’ve only had one orgasm, all morning. And it took half an hour of work to get you there. That’s not like you at all, Em. You’re preoccupied, or worried, or something.”

“I didn’t realise you consider making me come to be ‘work’.”

“Don’t change the subject. You know what I’m talking about.” With a sigh so deep it almost broke my heart, he stretched his body out on top of my bound form. The soft curls on his chest caressed my flattened breasts. His steely erection settled against my mound, reminding me that he hadn’t yet come at all.

For a moment, guilt smothered any traces of arousal. Then he nuzzled my neck and breathed in my ear, striking sparks and rekindling my terrible, unsatisfied need.

“I won’t mind. I won’t judge you,” he murmured. “You can tell me anything—anything at all.”

Oh really? Even that I want another man?

Had I spoken aloud? But no, his lips were on mine now, firm and familiar, relieving me, for the moment, of the necessity for speech. The flavour of my pussy mingled with the mint of his toothpaste. Sweet comfort flowed through me like warm honey. I stopped straining against the straps looped around my ankles and wrists and simply relaxed. He could take me wherever he wanted us to go.

I did trust him. He probably didn’t realise how much. I’d lowered my guard with him, letting him see both my fierce lust and my raw ambition. Neither had fazed him. And I’d allowed him to use my body in ways no previous lover had ever attempted—ways I’d never even imagined until he’d whispered his filthy suggestions in my ear and planted the seeds of new fantasies.

He broke the kiss and raised himself up on his forearms, gazing down at me. “I love you, Emily.” He didn’t need to say the words. The truth blazed in his face.

I love you too. I choked on the admission, unable to give back what he needed and deserved. How could I say I loved him after what had happened yesterday? Miserable, confused, drowning in self-reproach, I remained silent.

“What?” His insight shocked me into a response. “Um…no… I mean…”

“Whatever else you may or may not feel, don’t lie to me. Please.”

I swallowed the lump in my throat and scanned his handsome face. I saw no trace of anger. In fact, a hint of a grin played on his lips. I nodded.

“Tell me. Every detail.”

“Mei Lee Wong, I swear that if you don’t confess this instant, I’ll thrash you with that paddle we bought last week until you can barely walk!” Yet even as he voiced this threat, he levered himself off my body and thrust two fingers into my cunt, triggering a spasm of exquisite pleasure.

How could I refuse him?

“Well…the last few days—few weeks, really—he… I mean, Etienne, seems to have changed.” I stopped, trying to figure out how to approach a topic of such…delicacy.

“Yes? Go on.” He rubbed the pad of his thumb back and forth across the tip of my clit. When I arched up, seeking a firmer contact, he snatched his hand away.

“He’s been kinder. Less arrogant. More—I don’t know exactly—more deferential. He asks me my opinion about recipes. He even let me plan the last segment myself, everything from the appetiser to the dessert.”

“I’ve noticed the change myself. A positive development, given your career goals. But that’s not what’s making you blush, Ms Wong.”

No, I was blushing—at least partly—because he had wiggled one slick finger into my rear hole. “No…um… Oh, Harry, please…”

“Continue, slut, if you don’t want me to get out the paddle!”

“Ah…well, he has also been touching me. Just casual touches, you understand—touches that could be accidental. His hand will graze my arm—or my thigh. Or he’ll back into me when we’re in the kitchen together.”

“I’m not gay, don’t worry. But I’m not blind either. Monsieur le Chef has fine, round, muscular buttocks. And I’ve seen the way you look at them. I almost expect saliva to drip from your mouth.”

“Harry!” Was I really so transparent? Had anyone else noticed, or only my insanely intuitive and observant lover?

“I’m only teasing, love. Anyway, I adore the fact that you’re so—how can I put it politely?—easily aroused. Which is why I’m making you tell me this.”

I was silent. Mortified. My cheeks burned like the coals in a hibachi.

“Okay, okay. Yesterday I was in the dressing room, removing my makeup after the show. He knocked and called my name. I didn’t think anything of it, just got up and let him in. I figured he’d had an idea about next week’s menu. As soon as the door closed, though, he was on his knees, at my feet. Like that first day, when I’d spiked the choux.”

“Mmm.” He wormed his finger deeper into my back passage. Meanwhile, he brushed his other palm over my pubic hair.

My pussy clenched at the maddening delicacy of that touch. How was I supposed to concentrate on the story?

The bizarre scene was etched into my memory. Etienne had knelt before me, eyes cast down, patrician features composed and serious. His thick auburn curls gleamed. His Hermès cologne had tickled my nostrils. He hadn’t said a word, just waited with his head bowed, gorgeous and vulnerable. The bulge in his tailored trousers had spoken for him.

My nipples had snapped to attention. My panties started to dampen. “What is it, Etienne?” I’d asked, though I’d known perfectly well what he wanted.

“Ms Wong.” It was the same warm, cultured voice that had helped make him the most popular TV chef currently on the air. One could still hear the echoes of his Provençal childhood in the precise consonants and rounded vowels. Every iota of arrogance, though, was gone, replaced by an astonishing humility. “I think you know. Let me serve you. Please.”

Share what you thought about The Ingredients of Bliss PRINT and earn reward points.