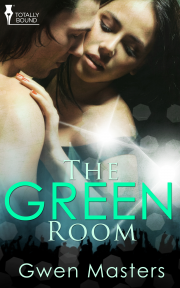 In the glare of the spotlight and the paparazzi cameras—can love really survive the rigors of fame?

Janey Mills has carefully cultivated a life that revolves around her work as a talent scout, with no room for anything personal. But when she stumbles upon Anthony Keenan playing his guitar at a smoky nightclub, the lines between her personal life and her professional obligations begin to blur. She believes in him in a way she has never believed in anyone, and she becomes determined that Anthony will be the ‘Next Big Thing’.

But at what price?

With Janey by his side, Anthony shoots to fame through a whirlwind tour, a record-breaking album release and all the trappings of sudden fortune. As the world of celebrity opens to embrace him, it brings along with it the darker side of fame—a side that might spell the end for their love before it has a real chance to begin.

The first time I saw him, I knew he was the one.

He was on the dark side of thirty, blessed with the kind of good looks that made people say he looked younger than his age. Shots of Jack Daniels poured out of the bottle and into the glass and into him, a constant circle. The bottle was sitting on the amp and rocking gently with the vibration. He held a guitar in his hands as if it were a wounded lover, cradling it, leaning so far over the instrument that he could almost peer at himself in the polish. The strings were golden in the stark lights of the stage.

“Who is that?” I asked my boyfriend.

He squinted through the smoke, over the five yards that separated patrons from guitar man.

“I think his name is Anthony. The blues guy.” David took a long drag of his cigarette and flicked the ash into his empty glass. The bartender shot him a look.

Blues guy closed his eyes and began to sing. The voice that came out of him surprised me so much that I upset my soda. David muttered to himself as he went to the bar to get a towel that smelt like liquor and stale chips.

I used it to clean the table, watching the blues guy all the while, listening to the sound of a deep southern drawl. David puffed his cigarette and laughed with the blonde to his right. Blues guy met my eyes once and looked away.

There were no lyrics then, only his hands flying over the fret board in such a way that a collective murmur began to grow. I stared even as I elbowed the tall man to my left. Keith was tapping his foot on the floor while his fingers drummed out a beat on the table. He hadn’t had too many drinks. This was work for us.

He nudged me back, grinning.

“I think so.” I picked up his drink. Keith glanced at me while I drank the rum, both of us pretending that the flush in my face was only the liquor. The blues guy in the centre of the stage had my whole attention, and Keith knew it.

“Looks like a guy on the cover of a romance novel. Tall, built, sexy.”

I shrugged with what I hoped was nonchalance. I tried to ignore the thrill that ran through me, but to say that I didn’t want blues guy from the get-go—well, that would be lying.

The number ended and the man onstage smiled with just the right mixture of arrogance and humble satisfaction. My boyfriend watched with interest as I stood and pulled a card out of my pocket. Blues guy noticed me but pretended he didn’t. I met him at the bottom step as he came off the stage.

“Hello.” His voice was deep and rough.

“I’ve been watching you up there.”

“I’ve been watching you, too.”

“That your boyfriend with you?”

“Yes. The other guy is the head honcho of one of our little record labels.”

His smile faltered a little. Wariness flickered in his eyes.

“We're impressed.” I flipped the cream-coloured card towards him, holding it between two fingers. When his hand brushed mine, I didn’t move away. His fingers were calloused, the hum of the strings almost alive in them.

“I’m the woman who can get you in the door.”

He held the card in front of his face, squinting to read it in the dim light. Laugh lines showed more clearly.

“Why would you want to get me in the door?”

“It’s all about the music,” I said, and he snickered, both of us knowing damn good and well that in the music business, the last consideration was always the music itself.

He stuffed the card into his pocket.

“Is there somewhere private we can talk?” I asked, knowing the only logical answer.

Share what you thought about The Green Room PRINT and earn reward points.