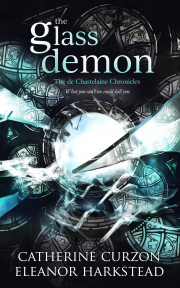 Book 2 in the The de Chastelaine Chronicles series

What you can’t see could kill you.

When Cecily arrives at her new home with her fiancé Raf, she’s looking forward to a happy life, with all her fears behind her. No longer a put-upon drudge, she is loved and free, ready to explore their new world.

After a summer spent battling the forces of darkness, Raf’s happy to get back to the garden of his chaotic ancestral home. There are flowers to tend and vegetables to harvest, and he’s determined to create a perfect sanctuary for Cecily to call her own.

But when a demon made of glass escapes from an ancient church window, the peace of their idyllic village is shattered. Neighbour turns against neighbour, crops turn bad in the soil and flies blacken the air. As a child lingers between life and death, bewitched by the glass demon’s bite, Raf and Cecily must remind the villagers of what really matters and unite the community in a battle to send their infernal tormentor back to hell.

Share what you thought about The Glass Demon and earn reward points.

Other books in the The de Chastelaine Chronicles seriesView Series Page