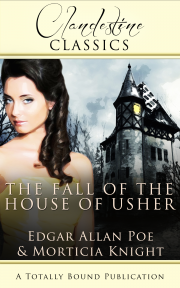 The Fall of the House of Usher

Gloom, dread and fear possess the House of Usher and its inhabitants. But Edward sees nothing but light and love in the fair Madeline. Can he save her from the deadly illness that has plagued the Usher family for centuries—before it is too late?

Invited to the gloomy, decaying House of Usher by a boyhood chum, Edward is perplexed by his friend’s mysterious affliction. Roderick tells him that it is a curse on his family, and that all of the Ushers must eventually succumb. Upon briefly viewing Roderick’s sister—the lovely Madeline—Edward determines to save both her and Roderick from their awful fate.

But there are strange twists and turns that Edward encounters in his quest to discover the truth of the puzzling illness. Is the valet Henry up to no good? Does the house itself hold some unnatural sway over its residents? Or is there an even more sinister explanation? When Edward finally chances to meet the Lady Madeline secretly, he has no doubt that only his love and resolve can save her.

One night, it appears that he hasn’t acted soon enough. Is there still hope that he can rescue sweet Madeline from the clutches of the evil House of Usher?

He admitted, however, although with hesitation, that much of the peculiar gloom which thus afflicted him could be traced to a more natural and far more palpable origin—to the severe and long-continued illness—indeed to the evidently approaching dissolution—of a tenderly beloved sister, his sole companion for long years, his last and only relative on earth. “Her decease,” he said, with a bitterness which I can never forget, “would leave him (him the hopeless and the frail) the last of the ancient race of the Ushers.” While he spoke, the lady Madeline (for so was she called) passed slowly through a remote portion of the apartment, and, without having noticed my presence, disappeared. I regarded her with an utter astonishment not unmingled with dread; and yet I found it impossible to account for such feelings. A sensation of stupor oppressed me as my eyes followed her retreating steps. For whilst she appeared almost as a spectre before me, there was still a radiant beauty of which I was captivated. Wavy tresses of a rich auburn hue flowed down her back, and even though her skin was as pale as alabaster, her features were powerfully outlined with a strong nose and high cheekbones. Full lips and large doll-like eyes made me long to get closer so that I might ascertain their colour. When a door, at length, closed upon her, my glance sought instinctively and eagerly the countenance of the brother; but he had buried his face in his hands, and I could only perceive that a far more than ordinary wanness had overspread the emaciated fingers through which trickled many passionate tears.

The disease of the lady Madeline had long baffled the skill of her physicians. A settled apathy, a gradual wasting away of the person, and frequent although transient affections of a partially cataleptical character were the unusual diagnosis. Hitherto she had steadily borne up against the pressure of her malady, and had not betaken herself finally to bed; but on the closing in of the evening of my arrival at the house, she succumbed (as her brother told me at night with inexpressible agitation) to the prostrating power of the destroyer by shutting herself in her quarters and accepting the comfort of her bed at last. I learned that the glimpse I had obtained of her person would thus probably be the last I should obtain—and my assumption was that the lady, at least while living, would be seen by me no more. I fretted upon this, for that brief glimpse of the Lady Madeline intrigued me to no end, and I hoped that Roderick was mistaken. I yearned for the opportunity to see her closer, and perchance to even have the occasion to speak with her.

For several days ensuing, her name was unmentioned by either Usher or myself between one another; and during this period I was busied in earnest endeavours to alleviate the melancholy of my friend. Initially, I thought to spare him the agony of being reminded of the one whose loss I knew he could not bear. We painted and read together, or I listened, as if in a dream, to the wild improvisations of his speaking guitar. And thus, as a closer and still closer intimacy admitted me more unreservedly into the recesses of his spirit, the more bitterly did I perceive the futility of all attempt at cheering a mind from which darkness, as if an inherent positive quality, poured forth upon all objects of the moral and physical universe in one unceasing radiation of gloom.

I shall ever bear about me a memory of the many solemn hours I thus spent alone with the master of the House of Usher. Yet I should fail in any attempt to convey an idea of the exact character of the studies, or of the occupations, in which he involved me, or led me the way. Had I been more aware of the coming events, I would have used these days for further analysis into the distorted thoughts of my once intimate associate.

So I shall try and convey each moment that passed at Usher, so that I can somehow reconcile all that occurred, and reassure myself that I acted in the best interests of everyone involved. I begin on that first oppressive night that filled me with such gloom and foreboding from the start.

After several hours of reacquainting ourselves – at which time I marvelled to myself at his sudden hardiness which belied my first impressions of him - I was shown to my quarters at another end of the sprawling manor by his bewilderingly silent valet. I entered upon a large sitting room, to which an equally spacious sleeping area was attached. The furnishings were opulent in taste, the antiquities as grand – yet also as ragged -  as elsewhere in the house. Still, the prevailing dreariness overshadowed everything, and stole any enjoyment I might have absorbed from my surroundings.

Heavy green and burgundy coloured drapes hung in tatters at the large windows of the bedroom, and as I unpacked my valise, I was aware of their fluttery movement. From the sounds of the scratching of bare tree branches outside, I surmised a storm must be approaching, and that the deterioration I had observed in relation to the house upon my arrival would undoubtedly contribute to many draughts throughout the house. The combination of my first impressions of the exterior, and the wild-eyed tales of my host, did not bode well for my night’s rest.

The hour had become quite late, and I endeavoured to get as much of an evening’s repose as was possible considering my strange environs, and the now raging storm. Oppressive thoughts were upon me as a result of witnessing the decline of my once robust friend, however I shall confess that the Lady Madeline also captured the wanderings of my mind. Such a lovely creature! And what a crime against nature that one so fair should be afflicted with some unnameable ill. What could it be that haunted the ancestors of Usher, that it now sought to destroy one so seemingly innocent?

I had but a fitful slumber – a few hours at the most – and my dreams turned into nightmares that tormented me with images of Lady Madeline in an open grave, the gravedigger tossing dank, moist earth upon her, and then her suddenly screaming and begging him to stop. It was a ghastly vision, and I awoke with a start - my skin clammy, my breathing quick and laboured. After that, I was unable to sleep any more, and all I could do was ponder upon the exquisite Lady of Usher, and determine that I would find a way to cure both her and her dear brother.
Buy Now

Morticia Knight spends most of her nights writing about men loving men forever after.

If there happens to be some friendly bondage or floggings involved, she doesn’t begrudge her characters whatever their filthy little heart’s desire. Even though she’s been crafting her naughty tales for more years than she’d like to share – her adventures as a published author began in 2011.

Once upon a time she was the lead singer in an indie rock band that toured the West Coast and charted on U.S. college radio. She currently resides on the northern Oregon coast and when she’s not fantasizing about hot men she takes walks along the ocean and annoys the local Karaoke bar patrons.

Share what you thought about The Fall of the House of Usher and earn reward points.