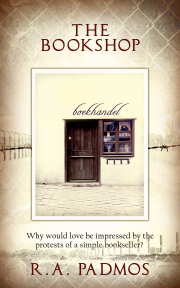 Even I, who had resisted kicking and screaming, had to admit defeat. Why would love be impressed by the protests of a simple bookseller?

Jakoba has had enough. It is 1999 and she looks back on her life that began at the start of the century. Her arrival was unexpected, but joyfully welcomed, by her middle-aged parents. In a time where a middle-class girl has one destiny, namely to become a wife and mother, Jakoba is allowed to start working at a bookshop. Books become one of the loves of her life. Later she will inherit the shop.

She values friendship, but romance has no meaning for her. She values her independence too much and knows all too well what price women pay for being married.

It is German army photographer Armin who will change the course of her life. Jakoba is forty when she meets him. Armin is almost thirty, and Germany has occupied Holland. It does not matter. For him, she’s the one, and despite her hesitation both because of the war and because she can’t understand what this handsome man sees in her—a plain woman—she has to admit her feelings for him.

Such love has consequences for both of them that will reach far beyond the war and in ways Jakoba could never have imagined.

Publisher's Note: This book has previously been published elsewhere. It has been re-edited for re-release with Totally Bound Publishing.

Let me be clear about one thing. I, Miss Jakoba Henrika Huyzen, born in February 1900, will not be part of the twenty-first century, just as I wasn’t part of the nineteenth. Even if no one knows the hour of his death, one who had to become as old as I am might be granted a clear look at the last boundary. I won’t be in the newspaper because the mayor won’t congratulate me with my one hundredth birthday, and no brass band will play their aubade.

My heart pumps my blood steadily through my veins, but at an ever slowing pace. Other people wash my no longer fitting skin, my gossamer-thin white hair. Those who live long enough seem to fall almost inevitably outside the very concept of beauty. We simply are. My young friends talk slowly and clearly, but they don’t really expect an answer from me. I am perfectly content with the silence. I do however understand their need to fill the space around them with sound.

In the time that I was born, almost no one had his or her own photo camera. My parents waited almost six months before they put me on the woolen sheepskin at the photographer’s so he could make that one picture of me. I know now there are no ugly children as long as one or two pairs of eyes adoringly witness the miracle. And perhaps I was indeed that miracle. I arrived at a moment when no one still expected me. Not quite three months after my birth, my mother celebrated her fiftieth birthday. I was her first and only child.

I was a child of the new century, born from parents who were no longer able to let go of the old one. Accidentally, one year before my birth, a photo had been made of my parents, likely to celebrate the day when my father, twenty years earlier, as a thirty-one-year-old civil servant had saved enough to ask permission to marry the two-years younger daughter of a textile merchant. I still have that photo of two middle-aged people with the solemn, unsmiling look that was so typical of the middle class. They were never affluent, although the deeply regretted absence of children saved them from poverty hidden by a thin veneer of respectability. This couple, that so looked like they were already grandparents in their dark, stiff clothes, joined their bodies during the last spring of the nineteenth century with so little hope left, and someone or something looked upon them with pity. My expecting mother hid her pride under her skirt, lovingly widened by her seamstress, but she embroidered enough tiny vests and bonnets to dress half a dozen babies. Many years later, I took every piece of linen and cotton in my own hands to bring the heritage of my mother to my own home. Later still, I saw my beloved admire every delicate stich and smile because of the miracle that had been passed on.

I was a quiet child in a quiet home. Still, my father took me on his lap from time to time to surprise me with a small tin toy or a piece of candy bought during his walk home from the office. I kissed his cheek above his graying beard. I didn’t have a grandfather, but did I need one with a gentleman in black suit with beard and smoking pipe as a father? So I held his hand while we walked through the park that had been opened eight years before to celebrate the coronation of the young queen Wilhelmina. It was then that I saw an automobile driven by a female chauffeur. A spectacle considered dangerous in more than one meaning of the word, and my father shook his head in calm disapproval. The lady driver wore a summer hat with white flowers, and I thought about that car and that hat for the rest of the day.

It was my mother, however, who took me to the bookshop of Mr. Beenstra. He can’t have sold many books, because most customers were lenders or they stepped inside the shop for their stationery. Mother bought her paper, pen and ink to write to her older sister, who once a year brought us a visit until her death in 1911, at Beenstra’s.

Without commenting on it, she must have seen how I admired a picture book with fairy tales while trying not to look greedy. Children learned at an early age not to ask for treats or gifts, because asking might result in not getting anything. Such a beautiful book must cost far too much and the mere thought that Mother or Mr. Beenstra would notice how much I wanted such a treasure made me blush. If Mother or Father would ask me if I had a special wish for my birthday or the feast of Sint Nicolaas, I might mention the book and who knew what would happen.

In no particular order: woman, writer, in a relationship with my wife since 1981 (though we had to wait until 2001 until we could actually get married), mother of two grown sons, owner of cats (I can pretend, can’t I?), reader and a lot more.

The Bookshop is a haunting story, unusual and full of memorable characters. This book will appeal to those who like a strong heroine and an equally unmoveable hero. These two are made for each...

Reviewed by Romancing The Book

The Bookshop by R.A. Padmos is one the most intriguing military novels that I have laid eyes on…readers will be blown away by one independent woman’s story. H

Share what you thought about The Bookshop and earn reward points.

We romance readers and writers all love a heroine who knows what she wants and goes out into the world to do whatever it takes to reach her goal. We want her to act on her own account, not react reluctantly to what others initiate. She has to be in the middle of the action, instead of being a mere observer.