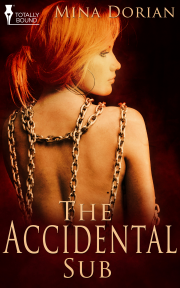 Jon has been a dom for years, but recently he has become bored with the lifestyle—until he sees Catherine kneeling in her office stark naked and in a beautifully submissive position. Jon knows he has to have her. Can he convince the gorgeous submissive to trust him? And will he be able to keep her safe from the demons in her past?

Reader Advisory: This story has been previously released as part of the Subspace anthology by Totally Bound Publishing.

The ringing of the phone disrupted Jonathan Udrow’s concentration. He frowned then glanced over at the sideboard, cursing his choice of a retro ring tone for the shiny new cordless device. Of course, when he really got into a scene and his partner was moaning with intense pleasure-pain, most other sounds were usually drowned out by the noise.

The phone gave another shrill ring, and the slender brunette squirmed in her ties. She stood spreadeagled with a metal bar between her ankles and her arms raised above her head, her wrists fastened to the elaborate suspension apparatus on the high ceiling of Jon’s bedroom. The room was large and sparsely furnished, its whitewashed walls still reminiscent of the warehouse attic it had been converted from. Only the bed and the big, old-fashioned bathtub in the corner of the room were proof of its current use. Jon had bought the warehouse in London’s East End earlier in the year after selling his small but successful software company to a competitor. He was in the process of converting the other floors into individual flats and offices but other than having a small bathroom and a kitchen put in behind a dividing wall, he hadn’t got around to buying much furniture for himself yet.

The room was almost dark except for a few strategically placed candles and some Christmas lights in the corner behind the bathtub, now blatantly out of season in April. The floor-length windows behind the woman’s naked body permitted a great view of the river as the lights from the buildings on the opposite bank were reflected on the black water. Of course, she hadn’t come here to admire the view. Jon had picked her up earlier this evening at an S&M club and taken her home to play out of sheer boredom. Lately, it seemed, he had begun to lose interest in dominating strangers and this one wasn’t really his type anyway. She was much too skinny, although he liked her perky tits, especially with the heavy nipple chain he had put on them. Jon grinned to himself wryly.

The brunette was blindfolded with a wide strip of shiny black latex. Her mouth formed a perfect O around the small rubber ball between her lips. He never as rule ball-gagged strangers when playing with them for the first time for security reasons, but the woman had begged him to fill her mouth and he had decided to grant her this small privilege.

The male voice on the other end was apologetic, but Jon could also hear fear and confusion. As an experienced dominant he had become an excellent judge of human emotions and, as far as he could tell, Greg was panicking.

"Jon!" the younger man started, without a formal greeting. "I need your help. There’s a woman here, and I think I’ve made her my submissive and now I don’t know what to do."

"Calm down. I thought you wanted to make Tiffany your sub. What went wrong?"

"It’s not Tiffany!" Greg’s voice was high-pitched with alarm. "It’s my new boss! I accidentally made her submit to me, and now I don’t know what to do!"

Jon stared at the phone in amazement. Accidentally made his boss submit to him? What the hell was Greg talking about?

"Tell me exactly what happened."

Mina Dorian lives and works in Berlin - one of the most beautiful places in the universe in summer and a real pain in winter. She is an avid reader who loves to escape to fictional worlds in both reading and writing.

Her real life alter ego holds a degree in English Literature and teaches literature and cultural studies to undergraduates. Her area of expertise and preferred reading material is Gothic fiction - from the historical variety with virgins in distress and dark abbeys to more recent stuff with cyborgs and sex with monsters.

Share what you thought about The Accidental Sub and earn reward points.