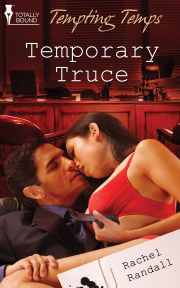 Between a cock and a hard case.

The rivalry between Caroline Kildaire and Hilary Swift is as infamous in London legal circles as their rumoured affair. And while a professional partnership would make them unbeatable, attempts to work together always turn to personal warfare.

With only forty-eight hours to coax a temporary truce, young facilitator Adam Bloom surrenders to their sexually-charged tension. He's risking it all to be the lucky man in the middle, hoping he doesn't get caught in the crossfire first.

If there's one thing the hot-tempered lawyers can agree on, it's that Adam's a tempting reward for cooperation. But in bending over for peace, he's sparked their next battle: who gets to the top.

The first shot took me high on the thigh, coming uncomfortably close to unmanning me. Next came the jolt of agony and, with it, a pleasurable rush of adrenaline. A red stain spread rapidly across my trousers, shockingly vivid in the sunshine.

I called out, but there was no offer of help, nor any reply from the hunter using me for target practice. Nothing, except for the menacing crunch of footsteps in the undergrowth. Heart pounding, I lifted my briefcase as a protective shield and headed up the driveway, but the safety of The Lodge was still a hundred metres away.

I’d requested this location on the outskirts of Richmond because I’d guessed it would be as far from the centre of London—and all the city’s distractions—as my notoriously difficult new clients would be willing to go. But, now, isolation seemed like a very bad idea.

I managed no more than a dozen limping steps towards the house before my would-be assassin stalked out of the woods, barring my way. She was a stunning redhead, wearing jeans that fitted her like a second skin. Suddenly, worrying seemed redundant. What was the point when the sight of her alone was already enough to slay me?

Bobbed hair fell across her serious expression. "Your leg looks painful." With a practised jerk of her hands across the pommel of her gun, she reloaded. "You’ll have to use your tie as a tourniquet."

There was something so business-like about the way she said it that I was tugging at my half-Windsor before my startled laughter caught up with me. The assault weapon she hefted so casually read ‘Paint and Play’ on the barrel, while most of the ‘blood’ coating me with scarlet had already gummed to a peelable latex.

She didn’t quite manage a smile. But she didn’t shoot me again either, which, given her reputation, was more than I’d expected. I found myself feeling sorry for those poor sods who crossed her path in the courtroom.

I collected my bags and dignity from where I’d abandoned them on the drive. "Actually, I was saving the paintball until Sunday," I told her. "You arrived early, I take it?"

"Not early enough. He was already here. Sorry for ruining your suit."

Scots. I’d always found the accent intriguing. But any pleasant speculation about how her voice would sound in the bedroom was ruined when she tempered her apology with, "Your fault, though. You really should have worn casuals."

Says the woman in the flak jacket, I thought, irritation and attraction warring within me. My conflicting feelings must have been blindingly obvious, because her lips twitched against a smile as she said, "So, you do have balls."

"Might have been a different story if your aim was better," I grumbled.

At that I got the full smile, the lighter expression softening the subtle lines on her face. It wasn’t reassuring, however, not when coupled with the laser intensity of her attention. "Oh, I always get my man."

Her relish gave me a sinking feeling. "Will Mr Swift be armed and dangerous as well, then?"

As if in reply, a murder of crows flew out of the trees in front of us, chattering as they were startled into flight by someone just out of sight. She aimed in that direction and blasted off a shot, exploding paint everywhere. When she immediately reloaded, searching for my still unseen second client, it was with a discomforting eagerness—especially given why we were all there in the first place.

My briefing had been to get two top barristers from opposing firms to cooperate long enough to win an important libel case. I hadn’t guessed, however, that I’d have to stop them from hurting each other first. The fact that the guns were toys made me feel only marginally more confident about the task ahead of me as a corporate facilitator. I made my living helping to smooth out difficult working relationships between colleagues—parents weren’t the only people in life that you couldn’t choose—but this job already looked like it was going to be an even bigger challenge than I’d imagined.

I sighed, thinking I should probably intervene. But when I turned back to her, my mouth went dry with lust. She was on high alert, every muscle in her tall body quivering with tension as she watched for her quarry. She was scowling, yet I didn’t believe that she was angry...she wanted this fight.

...another smokin' hot title in the Tempting Temps range from Total-E-Bound...I really enjoyed this sexy m�nage story � the professional and sexual tension really ratcheted up to fever pitch...

You can't go wrong with this one if you like lots of sex, an unusual plot and sassy characters. Temporary Truce is one for you.

Share what you thought about Temporary Truce and earn reward points.