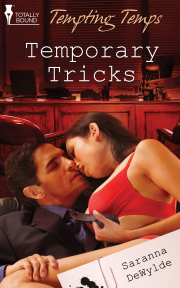 A temporary trick turned treat that could be the forever kind.

Khloe Bell knows full well that she's going to regret working for Reed Rothington. She's heard all the stories of mad shagging on his desk, in the limo, at charity balls, and across the filing cabinets. Yes, she'd heard it all from her dear roomie who has to take leave to visit her sick mum in England.

The problem? Bree needs a job to come back to and Khloe needs rent money. Reed needs a secretary to hold down the fort while she's gone, but Reed expects a little more than what's accepted or socially correct from his secretaries. He doesn't pay them for sex, he pays them to go away when it's over. No way is Khloe going to board that ship. She'll file, but there's no way she's taking dick-tation.

But this temporary trick could be just the treat they both need.

Rothington Towers stood like a sentinel against the skyline—tall and imposing. A massive structure that was nothing short of intimidating. Khloe had been directed to get into the first elevator and use Bree’s key to go straight to the top.

Khloe already felt like she was going to spray Chocolatini all over her borrowed Italian shoes. She had no idea who the designer was, only that Bree had deemed them the height of fashion and she must wear them for her first day.

Thank the little baby Jesus in Gucci that they weren’t insanely high heels—Khloe was already an Amazon at five-foot-eleven. Heels made her legs look great, she did know that much, but she also knew she teetered on them like a pregnant yak.

Granted, she maybe shouldn’t have had such a stout breakfast of champions, the two Chocolatinis in her kitchen which had given her the nerve to leave the apartment. She’d been popping mints like a junky needing a fix throughout the cab ride.

If she’d had any other option, she would have hopped right back in the next cab and burned rubber back home where she belonged. Unfortunately, she’d used the last of her funds to get there.

The elevator ride was not fun either. Khloe had no love for heights and an elevator with a view was not what she would call luxury. It was a horror upon all horrors and she forced herself to stare at the buttons, all the while she had a white-knuckled grip on the wood panel that separated her from the glass. As if that would help save her from plummeting to a certain and messy death. Just as she thought those Chocolatinis were going to win the revolt in her stomach, the elevator stopped and the door opened.

A deep breath was definitely in order.

The voice was kind enough to startle the ever-loving hell out of her. Khloe let out a small shriek and tried to step back, but found her way blocked by the closed elevator doors which propelled her forward into the man’s arms.

He caught her easily and with all the grace of a...well, not her.

"How about we see how your typing skills are before we rush into the 'mad shagging'?" He smirked.

He was devastatingly handsome. Too bad he was an absolute bastard. The complete sex appeal of the man who held her had shoved her out on the precipice between speechless and stupid. He was so hot, she’d been struck dumb. Maybe deaf too. His lips were still moving, but she couldn’t hear any of the words coming out of his mouth. If she were Bree, she’d simply call him a wanker or a git and slap him on his arm with all the cuteness of a baby seal. But no, she wasn’t Bree. She was Khloe.

"My apologies, I thought Bree had made it clear that I am only here for the typing part of the job, thank you very much." She reluctantly pulled herself out of his arms and straightened her borrowed suit.

Why had she said that? She should have simply sprawled herself over his desk and thanked the gods of sex that she had an opportunity to not only see a man like that naked, but actually touch him and be touched by him.

Dear Heaven and All the Saints, he was delicious. The embodiment of every romance hero ever written.

The man must live in the gym. Not only did he have the face of a Greek god, but he had the body as well. It had been very delightful indeed to have been plastered against the wide expanse of his chest, the steel vice of his arms, oh Lord. His dark hair hung over his brow in rakish rebellion...

"Oh, good. I wouldn’t want some silly girl who thought if I got into her pants she’d be on the fast track to Mrs Rothington."

She almost nodded as if she understood why they would think that. Instead, she mustered some backbone. "Why in the hell would I want that?" Except to fuck you sixty-three variations from sin on Sunday.

The dark slashes of his brows crashed together and he looked at her as if she were a new sort of tick he hadn’t seen before. "Yes, then I think you will do nicely." 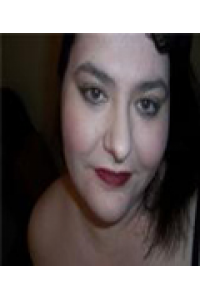 Saranna is a former corrections officer and full time Amazon Goddess who decided her pen was meant for Happily Ever Afters instead of disciplinary reports. Check out Saranna's blog here Follow her on twitter and be a fan on facebook

Share what you thought about Temporary Tricks and earn reward points.