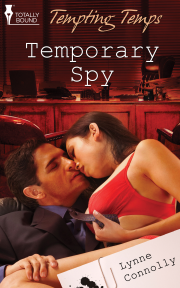 Lover to spy to lover

When Beth goes to work for millionaire architect Finlay Scott, she has an ulterior motive. She's a spy. But she's a spy at Finlay's request. They have history that neither have forgotten, but instead of ending their relationship, they rekindle it.

Unable to resist the sheer magnetic pull, Beth and Finlay plunge into a torrid after hours affair, but Beth is still determined to walk away at the end of the assignment. Can Finlay persuade her otherwise?

Finlay glanced up from his laptop and gave his PA a sweet smile. “Another temp you want to kick into touch? What’s wrong with this one?”

Joy threw up her hands. “Ditzy. I just caught her filing Citiseal’s information under Sealistic. I won’t find anything after she’s gone.”

Finlay folded his arms across his chest and studied Joy. This was about more than the new temp.

He knew his polite rejection of Joy’s offer to accompany him on his recent business trip to Rome had rankled, but after he’d discovered that she’d ordered one room with one bed, not two, he’d had no choice. Rome was only one small nail in the coffin of his relationship with his PA.

He’d pretended he hadn’t known she’d only booked one room, and that if the travel company hadn’t called to confirm he’d never have discovered it until they’d arrived. She’d stared at him in total incomprehension when he’d told her he’d be going alone. “But I always come with you!” she’d protested.

In a different room. “I’ve taken up too much of your time recently,” he’d replied. “I don’t think it’s fair to ask you to give up another four days for another useless conference.” Her dismay had been palpable, but he’d pretended not to notice.

He leant back in his wide leather office chair and smiled up at her. “After you’ve sorted the temp’s misfiling, why don’t you take some time off? Go somewhere you want, do something you want.”

He knew what she wanted, but she wasn’t getting it. No way would he go there, not now. Joy had been the best PA he’d ever had, or so he’d thought. He’d even wondered if he should forget his scruples and take her to bed. There was no doubting her attractiveness, neat figure, long blonde hair usually worn loose down her back, and a flawless complexion, but she didn’t do it for him. No spark, no fire, and he never mixed business and pleasure. He’d told himself it wouldn’t be fair on either of them, but by then he’d recognised the steely ambition under the skimpy underwear she’d let him see more than once.

She shrugged. “I might do that. Thanks.” The look of disappointment she sent him said anything but ’thanks’.

He returned to the subject of the temp. “I’ll talk to the woman, if you want. But not yet. Send her in at five.”

“Sure. I’ll watch her until then.” Her mouth turned in a sneer. “Maybe teach her the alphabet.”

Joy turned, making sure he got a good eyeful of her sassy rear, which was clad in a pencil skirt so tight she might as well not have bothered. She turned back before she left, hand on the door handle, as if asking him to change his mind. “Anything else?”

“Not right now, Joy. I have a report to finish.”

She pouted and left.

Finlay sighed in relief and put his hands behind his head, relaxing his cramped muscles before he carried on with his work. He had three straight hours in front of him. It should be enough.

This is a sweet and very sexy story about second chances, trust, and two people who are meant to be together...a satisfying romance, sexy and entertaining with just a dash of suspense...

Share what you thought about Temporary Spy and earn reward points.