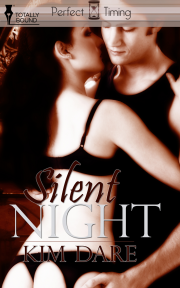 Hannah will give Vincent one silent night of pleasure, but that's it. If he wants more, he'll have to fight for it.

No one in the club has ever heard Hannah say a word, but they've all heard the rumours. She won't accept any man who approaches her - she insists on picking the lucky dominant herself. And when she makes her selection he can have her submission for one silent night, but that's it. She won't speak or agree to a second date.

Vincent is an experienced dominant. He knows how the game should be played. When he finds Hannah kneeling at his feet, he assumes she's just like every other submissive. But Hannah is different and Vincent soon realises one silent night isn't enough. He wants more time and he wants Hannah's voice.

Hannah really doesn't care what Vincent wants. She has her own reasons for keeping her relationships short and silent. It'll take a lot more than a display of dominance to convince her to trust him with the truth.

Reader Advisory: Although this book is part of a series, this book doesn't have to be read as part of a sequence. All the books in the series stand entirely alone.

Vincent Jennings raised an eyebrow at his friend. If his instincts were right, and Vincent had every confidence they were, the woman standing by the bar was just the sort of submissive lover he’d enjoy hooking up with for the night.

“Trust me. Just pick another girl and save yourself the trouble,” Frank went on, sitting next to Vincent on the low sofa.

Vincent studied the woman on the other side of the room. She displayed no obvious flaws, but Vincent was well aware the bar was Frank’s home territory, not his. He hadn’t moved back into the area long enough to know anyone on the local scene and even the most acute observations couldn’t compete with prior knowledge. “You know her?”

“Her name’s Hannah,” Frank informed him. “Do I need to repeat the thing about it being pointless to approach her?”

Vincent’s gaze trailed over the smooth curve of her neck. She wasn’t wearing a collar, so she couldn’t be committed to the pleasure of any competent dominant.

“She’s not owned?” Vincent checked, watching her take a bottle of Coke from the bartender.

“No. She’s free to play, but it won’t be with some idiot who hits on her at the bar. Hannah likes to choose the lucky guy herself.”

She turned around and scanned the room. For a moment, Hannah looked in Vincent’s direction. Their eyes met. Images flashed hot and vivid though his mind. A strapless leather dress hugged her curves, but her limbs were bare and begging for restraints to decorate them. In his mind’s eye he painted wide strips of black leather around her wrists and ankles. Perfect...

A chestnut ringlet escaped from the tumble of curls pinned up on top of her head. She tucked the lock of hair behind her ear and turned away from him.

His eyes narrowed. If she wasn’t already claimed, what the hell was the problem? “She’s a submissive,” he stated. He had no doubts about that.

Even more than the way she dressed, the way she held herself advertised her submission. All her movements were small and spare. There were no grand gestures. She didn’t look a dominant woman on the hunt for new prey. No, if anything, Hannah looked businesslike. That raised another question.

Frank shook his head. “She won’t take money—and I know enough guys who’ve offered her serious cash. But, those who kiss and tell say she has a signature.”

“Aren’t they reserved for serial killers?” Vincent still didn’t look away from Hannah. Everyone had to die sooner or later. She looked one hell of a fun way to go.

“Do you want to know what it is, or are you going to keep interrupting?”

Vincent said nothing. He wanted to hear it all.

“As I was saying, the woman has a signature. She comes to this club—and it is always this club—no one’s ever seen her anywhere else. She has a drink. She picks a man. She offers him her submission for the night.”

“She just says ’Would you like to be my master for the night?’“

Vincent imagined her kneeling at his feet and saying those exact words—soft and low—for his ears only. His jeans shrunk a fraction, but he forced himself to stay still in his seat and not draw attention to the fact he was slowly hardening in his pants at the very idea.

Hannah’s stroll around the room brought her closer. He caught a better view of her face. Close up she was pretty rather than beautiful, her face dominated by full, pink lips and big blue eyes. If it wasn’t for the air of submission about her, Vincent would have walked past her without looking twice—but no dominant in their right mind could walk past Hannah.

He was still waiting on an answer from Frank. When his friend let the silence draw out for another long minute, Vincent got the point. “Okay, I’ll shut up.”

That was the problem with Frank. Vincent might have grown up into an intimidating dominant, but Frank still remembered him as a skinny little schoolboy who couldn’t remember his times tables.

“No,” the other man finally resumed, “she doesn’t say that. She doesn’t say anything. I’ve never heard her say a word and apparently she only ever offers completely silent submission. One night—no talking, no repeat performances. That’s it, take it or leave it.”

“Has anyone ever left it?”

“Hell no! What sort of idiot would walk away from no strings sex with a walking wet dream?” Frank asked.

Vincent frowned. “So she walks in here, takes her pick and that’s it?”

“But she’s definitely a submissive?”

Vincent gave a mental shrug. Who was he to judge someone on their kinks? It was strange, though, that every dominant man she took a shine to...

“She always picks a dominant?” he checked.

It was strange that all the dominant men she hooked up with accepted being called to heel that way. Vincent knew one thing better than anyone. True dominants were chasers by nature. They all loved the thrill of the hunt. They all liked to make the choices. And they all liked to be in control—just like him.

If Hannah could take the chase away and still have every man in the room watching her every move, she had to be pretty special.

Vincent managed to tear his eyes away from her for a moment. He was right. Every man in the room was staring at her. He ran his eyes over man after man, saw gaze after gaze fixed on Hannah.

Idiots! They were turning themselves into the prey, playing the submissive for her before she said hello, or smiled at them, or whatever it was a silent submissive did to show a man he was the chosen one for the night.

...The story is beautifully told as if she were painting a lovely portrait...A story of trust while getting over one's insecurities and understanding another person's reasons for being different made...

One of the best D/s books I have read.

Share what you thought about Silent Night and earn reward points.