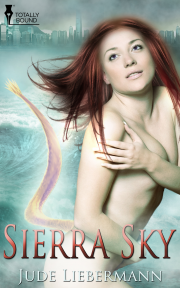 Half-breed Sierra must marry a prince from another planet in hopes she will someday be reunited with her enslaved love.

Sierra Sky is a half-breed of human and Klenarian but has been raised on Earth. Her father is king, and she is betrothed to the prince of a nearby warring kingdom on the far distant planet of Klenar.

The problem is she is in love with her protector, Dathu, who is from another planet of enslaved humanoids similar to Earthlings. She is forced to travel to Klenar and marry a man she does not know in hopes that someday she will be reunited with her love.

Along the way, she discovers more about her heritage and how exciting sex with aliens can be.

Reader Advisory: This book contains graphic sexual scenes, mild bondage, ménage and a tail that likes to get anally involved.

The first thing she became aware of was the pain in her head, and she tried to reach up to rub her temples. With the realisation that she couldn’t move, she grunted and forced her eyes open. The lids fluttered as the sun’s bright rays intensified the headache. Needing to know where she lay, her gaze moved about her surroundings. Nothing seemed familiar.

She grunted again as pain stabbed her tailbone and she shifted slightly to the side, relieved she could move at all. Feeling slowly returned to her limbs, and she bit her lip to keep from crying out. Painful tingles spread throughout her body, as if a giant weight had been pressed on top of her, then been removed. Blood as well as feeling returned to her extremities, and it hurt.

She bit down harder and tasted blood. The sting in her lip paled in comparison to the pain flooding her body, and tears filled her eyes. The gravel beneath her dug into tender flesh and she shifted again.

"Damn it!" she muttered as the sting in her tailbone returned. Realising that something was wedged under her butt, she groped beneath her, cringing as the torment in her arm intensified.

She searched the gravel with her fingers, looking for a large rock or stone. Her knuckles grazed her ass and her eyes widened in alarm and fear. Whatever had stabbed her tailbone was in her clothing...and it was moving.

She leapt to her feet, ignoring the intense rush of pain. It flew up her spine and exploded behind her eyes but her fear kept her moving. The snake-like thing had wrapped itself around her left leg, and she reached into her jeans to grab it. Hoping it wasn’t poisonous, she quickly pulled it out and tried to throw it away from her...and was only partially successful. She curled her lip as she stared over her shoulder to see the thing whipping the air . It had attached itself to her backside and was poking out from the waistband of her jeans.

"What the hell?" As feeling was fully restored to her body, a hard tug on the creature caused her to yelp in agony. Had it bitten her? She broke out in a cold sweat, unsure what to do next. Expecting her fingers to get sticky and damp from her own blood, she held her breath as she explored where the snake was attached. When she felt dry skin and no sign of teeth or fangs, she deepened her exploration. She stroked and probed until she became certain that it wasn’t a snake...but a tail.

"I have a tail." It was supposed to be a question but came out as a statement instead. "How can I have a tail?"

Humans didn’t have tails, and she was pretty sure she was human. It was then that she realised she had no idea who or what she was. The empty lot around her had obviously been vacant for years. Dust covered everything, as well as the broken-down car near the road. No sign revealed which road this was, or which town she currently stood in, and snow-topped mountains lined the horizon in the distance.

More curious about her body than her surroundings, she ran her hands down her front and between her legs. Everything her fingers touched felt normal for a woman, but her mind couldn’t stray far from the extra appendage attached to her tailbone.

A sudden breeze blew her long hair into her face, and she darted her hand up to grab a fistful. She stared at the blonde and red streaks in fascination, blinking a few times to make sure the red wasn’t blood. Grabbing another handful of hair revealed more of the diverse streaks. Had she actually done that to her own hair? Shuddering, she brushed the troublesome mane over her shoulders and crossed her arms over her chest. The breeze stopped as suddenly as it had started and her gaze travelled back to the abandoned car.

It would be a waste of time trying to start the vehicle. Even if it did still have gas or an engine that worked, the lack of wheels wouldn’t take her far. She stared at the metal rims and briefly wondered how long ago they had been stripped bare. Though there might be something in the car to let her know where she was.

The stench from inside nearly drove her back out, but she held her breath as she reached for the glove compartment. She grasped the rat by its tail and tossed it into the back seat before even being aware she should have screamed. She stared at its hasty departure in surprise before returning her attention to the compartment. She removed crumpled pieces of paper with her fingertips, and as she shook them out, rat droppings and dust scattered.

The Nevada address didn’t mean anything to her, but the state’s name sparked something in her muddled memory. Her gaze returned to the city. Though there was nothing special about it, she wondered if it was nearby. It suddenly became very important for her to know her location.

"What you hiding in those tight jeans, honey?"

Jude Liebermann has been a self-published romance novelist for over a decade and sells those books from her site at http://www.judesplace.com.

a fun,quick read. The story starts with a strong hook that grabs you and makes you want to read on to discover more. The characters are intriguing. The plot is fast paced...The sex is hot and varied,...

Share what you thought about Sierra Sky and earn reward points.