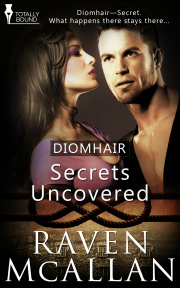 Book 2 in the Diomhair series

Pregnancy should be the happiest time of your life. What’s a sub to do, however, when her Dom won’t touch her? Kath can’t understand why Jeff is being so difficult. After all, she’s pregnant, not ill, and she’ll combust with sexual frustration if she can’t seduce Jeff into play.

Jeff can’t help but worry over Kath’s health. It doesn’t matter what anyone, including the doctor, says about sex being okay, his mind tells him otherwise. It’s his duty to protect his sub, even if he’s giving himself blue balls in the process. He’ll do anything to keep her and their baby safe.

With the two of them at an impasse, tension runs high, especially when the future of Diomhair is threatened by an unknown enemy.

As they pull together to secure their home, and their workplace, can they also resolve their personal problems, or does pregnancy spell the end of their Dom/sub relationship?

Her over-sensitive nipples should have raised red flags. If there was one thing Kath adored it was nipple clamps and chains on her when they played. Now she bit her lips to stop herself shouting red. Her arms were tied how she liked them—with soft buttery leather and pale pink silk covered cuffs, and her legs were spread wide, held by yet more comfortable restraints. Bent over the bench with the clamps weighted and dangling down into the air, Kath was wet with need and anticipation. This was her Dom and she loved how he made her feel. Usually.

You can do it. It’s fine, it’s what you want. She did her best to breathe through the pain like Jeff had taught her, and to embrace the sensations. It wasn’t working. When the first thud of the flogger hit her ass, she screamed long and loud. Oh, God, oh shit, oh fuck, ohhh it hurts. She thought she shouted red, but her mouth was full of cotton wool, and she couldn’t frame the letters. Kath gave in, and let the void swallow her as the world went black.

She came back to consciousness to hear Jeff swearing. Words alien to him. Words her mum would have washed her mouth out for. The room spun as he picked her up and his footsteps changed from the splat as he trod on linoleum to the heavier thud that echoed around as he walked over the parquet of their hallway.

“I need to be sick,” she said urgently, and Jeff changed direction to set her down next to the loo. He held her hair back as Kath, with no thoughts of embarrassment, upchucked everything in her stomach and then some. She felt wretched. Staring at the inside of the toilet bowl wasn’t one of the nicest things in the world. Even if it did have flowers on it.

“All done?” Jeff passed her a wet flannel, and she nodded as she wiped her face and hands.

Kath watched as the lime green pine disinfectant that coated the sides of the toilet bowl disappeared and the water flushed the evidence away. Her stomach ached with the violent exercise she’d given it, and the piny smell of the disinfectant that she usually liked was nauseating. What on… Oh grief. Could she be? Things began to add up.

The sudden craving for strong coffee when she’d always been mocked for her weak as dishwater preference was something to wonder about. The aversion to the Stinking Bishop cheese and pickle with crackers she’d picked at and then decided she wasn’t hungry. To say nothing of an achy back, sore boobs and a dislike of her favourite perfume. Her bustier dug in and her jeans were bursting at the seams. Kath added up weeks on her calendar and decided a visit to the chemist was needed. The only thing was—when should she tell Jeff what she suspected? Children weren’t something they’d discussed in any detail, apart from taking the usual precautions against conceiving. It looked like the condom gremlins might have been at work, but when? There hadn’t been any occasion lately when as Jeff so poetically put it, ‘this raincoat isn’t fit for purpose’. Pregnant? Surely not. Along with marriage it was in the ‘yeah maybe one day file’, not the ‘for immediate attention’ one.

He sponged her forehead. “Okay now?”

Kath nodded. “I think so. Once I’ve cleaned my teeth and used the mouthwash.”

He scowled. “I said that fish smelled fishy.”

Kath giggled, and he looked sheepish as he put toothpaste on her brush and handed it to her. She took it gratefully, pleased to be able to freshen her breath and not feel as if she was twenty and experiencing the after effects of a boozy night out at uni. Jeff waited until she’d finished and lifted her into his arms. His cock bounced under her ass, and she smiled. He might think it was all over, but his dick didn’t. There’s hope yet then. She remembered Jeff’s last statement and sniggered.

“Yeah well, you know what I mean. Okay, pet, bed and a drink of water. Will you be all right if I go to tidy up the playroom?” He tucked her under the duvet as if she were a child. It was both comforting and annoying.

“Of course. But, well…” Kath looked up at his cock still hard with tiny droplets of pre-cum coating it. “We haven’t finished.”

Jeff raised one eyebrow, all Dom and all dominant, and Kath shivered. She loved that masterful ‘I know what’s best’ side of him, but at that moment she wished he’d sat on it. She needed to come, and if he wouldn’t fuck her, then bugger it, she’d do it herself.

“You can wait, it’ll do you good, pet. None of this bratty attitude now, please.”

It seemed he understood her expression.

I loved book one, or should that be Part 1, of this series and this book/part just followed on as smoothly as ice cream on a hot apple pie. Of course, seeing as its been written by Ms Raven, it ends on...

Share what you thought about Secrets Uncovered and earn reward points.

Many moons ago I read a romance set in New Zealand. The descriptions of the scenery were so vivid I was hooked, and said immediately that I wanted to go and visit and see for myself. The author painted such a graphic picture of the areas the book was set in that I felt I was there with the characters. When eventually, many years after, I was lucky enough to visit the country, I had a fantastic sense of déjà vu. It was familiar. I remember walking around a corner in a village in Northland and knowing what was around the corner. All from a description in a book I’d read a long time before.

How lucky am I? The day I was able to put 'author' in the little box that asks for your status on a form was a red letter day for me. I swear my hand shook as I wrote the word.

I'm an author. I write romance. All sorts of romance.

Not only do I decide what my characters are like, but in theory I get to tell you, the readers, their story. I say in theory because I'm one of those people known as a ‘pantster’. I start off with an idea, know where I want it to go and then sit back and enjoy… or not… the ride. Whether I get to where I thought I was going is in the lap of the gods…or the characters.