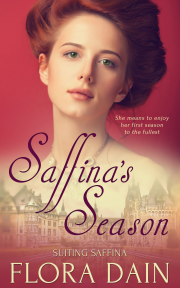 Book 3 in the Suiting Saffina series

When he treats her to her first London Season, she looks set to shine. But the more she sparkles, the more he despairs.

Now happily married with a baby son, Jacquard treats Saffina to her first London Season. He’s keen to show off his new countess, and she means to enjoy it to the fullest. She flirts outrageously, sees off catty remarks from jealous rivals with smart retorts and generally has a terrific time.

But when she’s waylaid by footpads one night in the backstreets of Chelsea, she’s unexpectedly rescued by a struggling artist. Inspired, she commissions a raunchy portrait for Jacquard’s birthday. As she struggles to keep it a secret, Jacquard grows moody. Soon he suspects an affair and thrillingly, steps up her discipline by giving her a taste of leather.

But at the Carlton House ball, when the prince reveals his new mistress, both she and Jacquard get a shock. He storms out, enraged.

Has she gone too far? Will she lose her husband, her good name and her son?

“You do this on purpose, I swear. Why do you torment me so?” His dark eyes glittered in the cushioned privacy of his carriage. His mouth twisted, sulky as a schoolboy’s.

“You torment me all the time.” I pouted. “Now you know how it feels. Just one day more, then I’ll be fresh for you.”

“You’re always fresh for me. You’re irresistible at these times. Your power is at its height. Even the ancients knew that. Please, Saffina, just once.” He growled in my ear, nipping my earlobe. “Please.”

I writhed as he slipped his hand up into my skirts, his touch light as a feather on my inner leg, his fingertips trailing tiny shivers over my soft skin.

He slumped back in the corner with a groan. “Now. And make it quick. We’re almost there.”

With a wry grin, he freed himself and sprawled back, pushing gently on my shoulders to get me in position. With a coy glance, I slipped down between his thighs then leaned up to kiss his hot, glossy cock.

“Like this, sir?” I folded my hand around it, fondling its silky stiffness for a moment, then dipped my head to taste, licking the crown with the tip of my tongue.

I glanced up to check his response. Thrilling to the heat in his look, I grew bold.

“Or like this?” I surged forward, driving my eager mouth along the hot manhood, arousal pooling between my legs as it filled my mouth and nudged mercilessly at the back of my throat.

Jacquard Forsley, the great Earl of Endale, stunning, distinguished and rich beyond reason, was now my husband. As his new countess, I belonged to him, body and soul, both in law and in my heart. Pleasing him was all my joy.

I had few powers over him, but this was one. I vowed to make it last.

Like all women, I cursed my time of the month. However gently I denied him, refusing him full access drove him wild. But teasing him with my mouth like this was a constant delight and drove him even wilder, it seemed, especially when I timed my caresses to match our arrival at some ball or other, when—surprise, surprise—we had to break off just before he came. It meant an evening of anguish for him and plenty of fun for me—and high risk of a severe and truly satisfying spanking when we finally met up again.

In truth, my worst had passed. Only traces remained. But for the fun of it, I’d deny him a few more hours.

Now, just to tease, I pulled away at his peak. “So shall I pick you up after the club, my lord?” My mouth was all moist softness, my look all innocence.

His flash of irritation betrayed his need. “I can walk, damn it. Finish me, for pity’s sake.”

He was en route to his club, I to an exclusive soirée. We rarely split up for the evening, but tonight we had to. Jacquard had promised to show me a Season. Our arrival had caused quite a stir.

I was a great curiosity, partly because my dashing husband had evaded marriage so long, partly because so many mamas longed for a glimpse of me, the hoyden who had finally snapped him up from under the very noses of their daughters. Jacquard was one of the richest men in Europe.

They could carp all they liked. I meant to have fun.

Now I leaned back on my heels, mock stern. “You can do many things, my lord. But walking alone in the capital at two in the morning? Far too risky.” I gave him a lofty smile. “Some poor footpad will accost you, and you’ll run him through. Then I’ll lose you to the gallows. Let me collect you in the carriage. Then we can arrive together.”

His eyes gleamed. “Arrive together? Surely you mean come together, ma’am? And did I not warn you that I require payment for lending you my carriage in the first place? You have your own phaeton. You could have come in that.”

I leaned up to kiss his cheek. “You know I’d far sooner come in private, sir.”

With a grin, he hoisted me onto his lap and edged my flounces up my thigh.

I drew in a sharp breath as he began to explore, quickly searching out my pleasure spots with his fingers, his persistent touch so exciting that it made me writhe.

“Are you going to lower the blinds, at least?” I sounded husky over the clatter of the carriage wheels. At this hour, the streets were busy. Any minute someone might look in and see me clasped in my husband’s arms, with his hand buried in my skirts.

Flora Dain caught her first heady whiff of success in 2012, when four of her short stories first appeared. Two years later saw the publication of her first three novels. Now her naughty novels, wicked novellas and spicy stories pop up all over in Kindle, e-pub and paperback, some in story collections and others singly.

She loves trying out fresh angles on old themes and even dips into history and the paranormal, but her focus is always on racy romance, both in reading and writing. When she’s not admiring someone else’s hero, she’s happily dreaming up her own!

Flora’s married and lives in the UK.

Share what you thought about Saffina's Season and earn reward points.

Other books in the Suiting Saffina seriesView Series Page