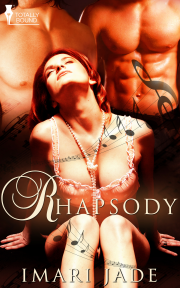 Two gorgeous male rockers, one sexy lead female singer. Both men want her. Who will she choose?

Bryanna Trosclair is the female lead singer for the successful rock group, Simmer. She is being forced to choose between having a relationship with her best friend and lead male singer, Axil Simmons, and the group's pianist, Collin Ripley.

Bryanna refuses to make a choice and decides to date both of them, even though the guys are ready to not only tear each other apart, but the group as well. When Axil and Collin call a private truce and decide to trick Bryanna into making a decision, their plan backfires. Can Simmer survive the fallout of the hot results?

Publisher's Note: This story has been previously released as part of the Treble anthology by Totally Bound Pubilshing.

"You have to choose," Axil Simmons told her.

Why should I? Bryanna Trosclair thought. It’s their problem, not mine.

He’s right. How could she choose between him and the twenty-five-year-old golden-haired Axil, who’d been her best friend and confidant since they were ten? "I’ll tell you what. The two of you fight it out and the winner gets me," Bryanna said, hopping from the stage and heading up the aisle.

"Come back here, Bryanna," their tenor and lead guitarist Axil shouted into the microphone for everyone in the auditorium to hear. "You can’t just leave like this."

Of course she could. She, being a liberated female, could do anything she wanted to...except break up a friendship and one of the hottest bands in America.

Bryanna stopped in her tracks.

"What are you saying, dude?" Collin replied from his side of the stage. "Of course she needs to decide."

"No, she doesn’t." Axil’s tone was defeated. "Put yourself in her shoes. Could you make this choice?"

Bryanna turned to face them and waited for Collin’s answer.

"No!" He stomped away from his keyboard and went backstage to sulk.

"You’re killing us, Bry," Axil said. He strummed his guitar and began playing a haunting tune. He used music to cope with his problems. He’d been this way even as a child, disappearing into his attic studio whenever things got tough. During those times his music had lulled her to sleep at night as the sound spilled over to her house next door.

Bryanna sat down in one of the seats to listen to the sweet sounds of the strings as the music permeated everything around them. Axil was unreachable when he was like this, turned on and tuned out to the rest of the world. He could make a guitar sing when he put his mind to it. He’d wanted to be a rocker for as long as she could remember. Now he was the hottest guitarist in Northern America. How could she decide between him and the dark-haired, dark-spirited Collin, who with just one look had stolen her breath away?

Collin returned from his sulk and took his position behind the keyboard again. He tickled the ivories and began playing along with Axil.

Bryanna gazed up at them. Where Axil represented everything bright and sunny, Collin represented the darkness—twinkling stars, moonlit nights and secrets. His jet black bangs bounced against his forehead as he played. Bryanna shivered. Such sorrow and despair. Had she caused this? They continued to fill the air with their deep, soulful song. Bryanna shook her head. Maybe she should just leave and put both of them out of their misery.

The doors opened and the rest of the band members filed in. Axil and Collin kept playing, each refusing to give up.

Kurt Vanderbrom, their drummer, sat down and placed his hand on top of hers. "I could hear them battling all the way from the parking lot, Bry. You know this is wrong."

Share what you thought about Rhapsody and earn reward points.