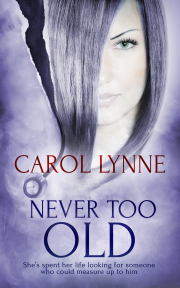 Finding true love twice in a lifetime is a gift Joe refuses to turn his back on, despite Holly’s age.

A widower of ten years, fifty-six-year-old Joe Dunberg is finally interested in a woman besides his late wife. The problem is Holly is twenty-six years old. Joe knows Holly is attracted to him, but the age difference seems too much to overcome.

To Holly, small-town doctor Joe has always seemed like the perfect man. She’s spent her life looking for someone who could measure up to him. Despite their age difference, Holly finds Joe to be the sexiest man in town, and Holly is ready to unleash her fantasies with him.

Joe has his own fantasies. Despite his misgivings, he’s ready to explore the sensual side of himself with Holly. He just hopes her heart is in it as much as his own.

Publisher's Note: This book was previously released at another publisher. It has been reedited for release with Totally Bound Publishing. This book features characters from Necklace of Shame, but can be read as a standalone novel.

Sitting on the front porch, Joe Dunberg stared out over the street he’d called home for thirty-six years. He’d inherited the house from his grandmother when he was barely twenty. He’d already had a wife and son by then, his darling Nora getting pregnant their senior year in high school. Joe hadn’t thought twice, he loved Nora. They’d married right after graduation and Brody had come at the end of the summer of that same year. Joe’s Grandma Dunberg was a stickler for getting an education, though. Her will stipulated that Joe could have the house along with a good-sized inheritance if he went to college and made something of himself. It was the break that every young father dreams of. He’d moved Nora and Brody into the house and traveled eighty miles every day to the college in Colorado Springs. After eight years of hard work and long nights, Joe had become a doctor. He’d set up practice in what had once been the servant quarters at the back of the house.

The day his Nora had died of cancer, Joe had lost a piece of himself. He’d loved her more than his own life. Nora had been gone ten years now and Joe felt so lonely he was ashamed of himself. He was fifty-six. No way should he still have an erection every time a pretty thing walked by. Well, that was not really true. The only person these days that had that effect on him was Holly Mills, his surrogate daughter Annabel’s best friend.

What was worse than an old man getting an erection over such a pretty woman was the fact that the woman seemed to want him back. How in the world could a woman of twenty-six be interested in a man thirty years older? Joe knew he still looked good. He’d cut his long hair two years ago, despite Nora’s plea for him to keep it long always. The shorter style seemed to take years off his face, but it was still shot through with a liberal sprinkling of gray. He worked hard every day to maintain his still firmly muscled body. An hour of weights in the morning and an hour of jogging in the evening had become his routine since before his Nora died.

Joe stood and walked into the empty house. He missed having Holly around. She’d stayed with him for a couple of weeks just over four months ago after Annabel’s father, Gerald, sought revenge for putting him in prison ten years earlier. Gerald had always been an abuser. He’d beaten his wife for years until she’d died of leukemia when Annie was just fourteen. Then came the alcohol and finally he’d started hitting poor sixteen-year-old Annie. The last night Gerald had abused his daughter, he’d not only taken her virginity, he’d tried to end her life by slashing her throat. Luckily, the throat wound hadn’t gone deep enough to kill her. She still wore the scars of that night, though. Both on her neck and in her heart.

When Gerald had been released from prison, he’d attacked Annie, as Joe called Annabel, once again. That time, he’d come even closer to killing her. She decided to move in with his son and his best friend and longtime secret lover Callum, the sheriff of their small town of Gorge City.

After a prowler had been heard outside her house, Holly had come to stay with Joe until they caught up with Gerald. Those few weeks that Holly had been in his home were the best and worst for Joe. He’d always had a soft spot for the girl. Like Annie, Holly came from a dysfunctional family. In Holly’s case, though, it wasn’t her father who was after her virginity, it was her mother’s boyfriends. Letty Mills was a drunk and a tramp who had men coming and going all day and night. The only way Holly had made it out of her mother’s house in one piece was by making friends with Annie. She’d often stayed over at Joe’s house once Annie had come to live with him.

Boy, how things change. Where once Joe had felt only a paternal affection for the girl, now he thought of her nearly every moment of the day. It wasn’t her heart or company that made him feel like a dirty old man, it was the fact that he couldn’t ignore her beauty. With long black hair that felt like silk in his hands and eyes so green he often got lost in them, Holly was every man’s dream. Her body was every man’s fantasy. Her legs seemed to go on forever and her breasts were so generous in size they were clearly built for a man’s hands.

Joe’s body started to react to the thought of Holly’s physical attributes. He shook his head and walked into the kitchen. Getting a bottle of beer out of the fridge, Joe thought about the first day he’d held her like a man is supposed to hold a woman…

As founder and President of GRL Retreat, Inc., Carol helps organize the annual GayRomLit Retreat. Now in its sixth year, GayRomLit is an annual retreat that brings together the people who create and celebrate LGBT romance for a one-of-a-kind, must-attend gathering of dynamic, informal, and diverse fun.

Share what you thought about Never Too Old and earn reward points.