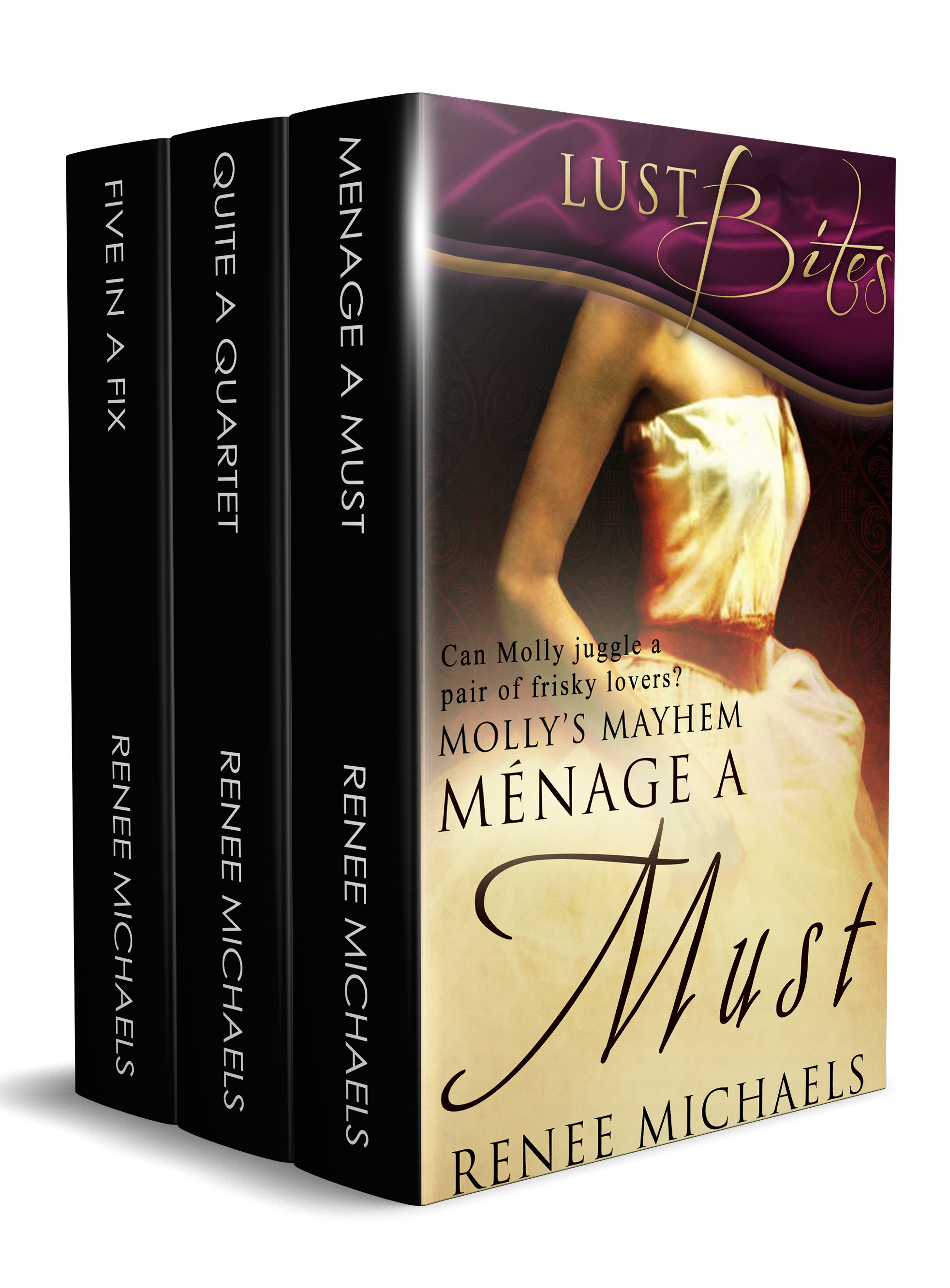 Can Molly juggle a pair of frisky lovers and prevent her adventurous young mistress from playing fast and loose with her virtue? Yes, she can.

Molly O'Dowd is a maid with ambition. She doesn't intend to spend the rest of her life in service. But first, she feels bound by loyalty and gratitude to see Annabelle, her young mistress, settled before she leaves to make her fortune.

At the estate of her employer's potential suitor, she meets Graeme and Logan, a lusty pair of rogues who entice Molly to indulge in a tryst or two or three.

To Molly's delight and relief her employer takes matters in her own hands and secures a proposal. Molly is now free to go, but she hesitates—after all, she now has two reasons to linger a while…

Five in a Fix

An old lover, a new love, a change of dreams… It all promises happiness.

Molly is finally on her way home and one step closer to achieving her ambitions. After they secure her employer’s inheritance, she can take off to seek her fortune. But with a distracting lover and danger lurking in the shadows, how is she expected to focus on getting ahead?

She has never dreamt of marriage. Her aspirations lie elsewhere. Now, with the idea planted in her head by a roguish Irishman, she begins to wonder… And there’s a second man bent on wooing her too.

Molly is the girl for him, and Logan is determined to make her his woman. No murderous villain or rival for her hand is going to prevent him from claiming her. All he has to do is convince Molly that he’s the man for her.

With Molly’s mind fixed on one goal, her heart begins yearning for another. The mayhem, which is now commonplace in Molly’s life, continues.

Reader Advisory: These books contain scenes of ménage à quatre including brief scenes of FF intimacy and a brief reference to FF sexual contact, as well as a scene of attempted rape. Five in a Fix features two MF relationships and a scene of FMF ménage.

When the wheel of the carriage Molly O’Dowd sat in dropped into yet another rut, she slapped a hand on her prized bonnet and hugged her mistress’s jewellery case to her chest. The vehicle gave an ominous creak and listed to one side before it lumbered forward. She sent up a fervent prayer that they’d reach their destination soon. Her sore bum could not take another round of bouncing on the thinly padded seat.

"No title is worth this discomfort." The loud, petulant complaint came from the young miss she served as a personal maid.

Her mistress sat across from Molly, arms folded across her chest. Ethereally beautiful, with flawless skin and cornflower blue eyes, and an heiress to a fortune built from railways and coalmines, Annabelle was the only child of the late August Calder. He’d been an overindulgent but neglectful papa, which had made her just a tad spoilt.

With her tight fist holding the purse strings, Annabelle’s social-climbing stepmamma had dragged her to England in her hunt for a title. And not a moment too soon—the girl needed a man but more importantly a husband. Molly had caught Annabelle’s dancing master lapping away at her virginal cunny.

There was no telling her mistress anything once she got a notion in her pretty head. She’d kept Molly busy smuggling the man in and out of the Calder mansion. Molly had barely managed to preserve Annabelle’s virginity using dire threats and never being more than a few feet away from the amorous couple.

"Hush, Annabelle, the earl’s servants might hear you." The admonishment hissed from the perpetually pursed lips of Annabelle’s stepmother, Priscilla.

Her name suited her—prissy by name and nature. Mrs Calder never had a hair out of place or a thread hanging from her ensemble. She was a thin woman with a fondness for ruffles and pastels, which didn’t suit her sallow skin.

As far as Molly knew, Priscilla never showed any emotion but disapproval or irritation. Molly wondered for the millionth time how she had become the wife of that lusty old letch August Calder. Before he had died, he’d pinched Molly’s bum and fondled her breasts on the sly more than once. Given the chance, he’d have tossed up her skirts for sure. Now she wasn’t adverse to a good tumble, but to spread her legs for the master under his wife’s nose was the act of a slattern. She had standards—a little relaxed, but they served her well.

Annabelle groaned as they hit another pothole. "I still don’t see why we couldn’t hire a conveyance for our use."

"His lordship offered the use of his carriage and we didn’t want to offend him." Her tone suggested that their discomfort was inconsequential.

Annabelle’s rosebud mouth formed a pout. "Molly, you did pack my bed linens, didn’t you?"

Priscilla waved her hand to cut off Annabelle’s gripes. "Never mind that, I wanted to have a word with the both of you before we arrived."

This explained why Molly wasn’t travelling with the rest of the servants rs Calder deemed necessary as a show of her wealth.

"Now you listen to me, miss, I’ve paid that impoverished noblewoman a small fortune to secure this invitation. uck it up and I’ll ship you off to my aunt in aine."

The threat hung in the air. Priscilla’s aforementioned relative would make a Puritan look like a hedonist.

Annabelle narrowed her eyes into slits and her expression turned mutinous. Even then, she looked like an annoyed fairy. "The executors of my father’s estate wouldn’t let you."

"Everybody has a price." Priscilla pinned Molly with an inimical glower. It seemed she wasn’t to escape Priscilla’s censure. "I expect you to keep her in line and not pander to her odd whims."

Molly gulped and nodded. She couldn’t afford to lose her place, not when she was so close to getting out of service on her own terms.

Share what you thought about Molly's Mayhem Box Set and earn reward points.