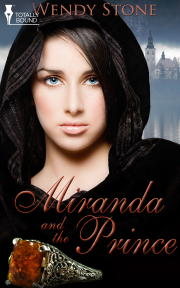 Miranda and the Prince

Miranda and Braden seemed fated to be kept apart until one day when Braden found a ring, giving it to Miranda.

Little did either know that their destinies changed from that day forward. The ring, a beautiful amber stone set in gold, was the home of a genie. Her name was Kendra and she was beautiful with white blonde hair and violet eyes.

But with the dangers that Miranda lived through every day, could even Kendra's magic be strong enough to keep her safe until Braden could claim her as his own?

Miranda ducked her head, barely avoiding the bucket of slops that was hurled out the window into the street just a few feet away. It splattered, foul liquid spraying up, and she jumped out of the way, anxious to keep her dress clean. If she spoiled it, she wouldn’t have a chance to wash it for days.

It wasn’t as if she didn’t want to be clean, she thought, checking the hem of her hand-me-down gown. It was just that she didn’t have time to take care of anything but what her father, his new wife and her children needed done. The few things Miranda could do to make life more palatable for herself always waited until last.

If things went awry, it fell to her slim but sturdy shoulders to deal with them, including making sure that the booth where sold the few vegetables they gathered was set up in the marketplace every morning. It also fell to her to work that booth, for her father trusted no one else to handle his money. He demanded an in-depth record of all that was sold and the coin that was earned.

And if the tally was not met, she paid the price. Even now her back ached from the stripes he’d placed there, using the heavy cane she used on the oxen when it came time to plough. Miranda sighed. There wasn’t time for her to rest and heal, even though she ached, for there was work to be done-always.

It wouldn’t have been so bad if her father and stepmother helped or even if one of her three step siblings lent a hand. But her father said this wasn’t the life they were used to, but it was one she was built for. He called her slight build sturdy and slapped her on her back almost hard enough to make her lose her balance.

Miranda was tall, just a few inches shorter than her father-a fact he bemoaned. She had the looks of her mother, fine-boned but lush with curves that were the envy of her stepsister. She also had her mother’s black curls and her bright blue eyes fringed with heavy dark lashes. Pale skin, like that of a porcelain doll, was smooth and perfect without the blotches that plagued her stepsister.

Her lips were full, curving seductively, cherry bright. Her nose was thin, tipped at the end to give her a touch of precociousness. Her heart-shaped face held a determined chin that could be stubborn when necessary. She was a comely lass, and the bane of her stepfamily’s existence.

Miranda reached the stall in the marketplace, unloading the heavy basket she’d carried. One of the other servants, a stout woman in her late thirties, was already there and smiled as she walked up.

“’Tis about time you arrived, Miss Miranda. I was worried something might have happened to you.”

“No, Kate, I’m fine, just a little slow on my feet this morning.” She didn’t mention the reason for her slowness nor did Kate ask, for all the servants knew of the punishments her father administered and how often Miranda paid for crimes not of her doing.

“I could have carried that for you, girl. There was no reason for you to do that,” Kate scolded her.

“It’s fine, I’m fine,” she said, stressing the words but softening them with her smile.

They got to work and finished unloading the handcart Kate had brought. Soon they were selling their wares. Miranda was happy. With today’s crowd they would make enough to please her father and perhaps keep her stepmother content.

A loud blaring of horns could be heard through the market, and Miranda looked up from where she measured a cup of wheat flour to see what the fuss was about. It wasn’t hard to tell. Above the crowds of people were men on horses dressed in the livery of the palace. Their horns blared once more before they parted, turning in perfect step to allow for the arrival of others.

Miranda watched, her eyes huge, as two men rode forward, their heads bent towards each other as they conversed. It looked quite heated, as well. The younger of the two, a handsome noble dressed in a fine leather jerkin and breeches, a white shirt and high knee boots, threw up his hands, tossed his reins to a young page standing before him and dismounted.

His hair was dark brown with glints of red peeking where the sun’s rays teased them out. His green eyes were the colour of the peridot that her mother used to wear round her throat on special occasions-an unusual colour for an eye, but one that drew the gaze as it drew hers.

His face was rugged, a small scar in the corner of his mouth adding to his appeal and giving him a hint of a devilish mien only enhanced by the scowl he wore at this moment. He was amazingly tall, his shoulders broad and his chest wide and powerful. The muscles of his thighs strained the breeches that covered them, flexing as he walked away from the older man and his horse.

She gasped as his gaze met her own, and she covered her mouth, lowering her eyes. It would prove disastrous if such a man, not just a royal but Prince Braden, the only son of the King and Queen, was to show any interest in her. Her father would beat her, perhaps this time cutting off her hair, which he had decided was the source of her “sinful” pride.

She finished measuring the flour, refusing to look in his direction again, even though she felt his strangely beautiful eyes upon her. Collecting the monies owed, she turned to the back of the stall, secreting away the money in a small purse that was in a hidden pocket in her skirt.

She heard the deep, masculine voice and knew a moment of panic. Turning, she looked up into his face, feeling those green eyes as they wandered over her as if assessing her value. “Yes, Your Highness?” she asked breathlessly.

Prince Braden, son of King Magnus and Queen Wilhelmina was talking to her, Miranda, the nobody who was good only for work.

“I believe you dropped this,” he said, holding out a ring that was covered with hay from the floor of the stall.

Miranda was so flustered she held out her hand, feeling the ring dropped into it. “T...Thank you, Your Highness,” she managed to say, dropping a quick curtsey and looking down at the floor.

“You should be more careful. It looks like a family piece,” he said, raising her chin with his hand. “You are quite beautiful. Who do you belong to?”

“Belong to? Your Highness?” she stuttered.

Share what you thought about Miranda and the Prince and earn reward points.